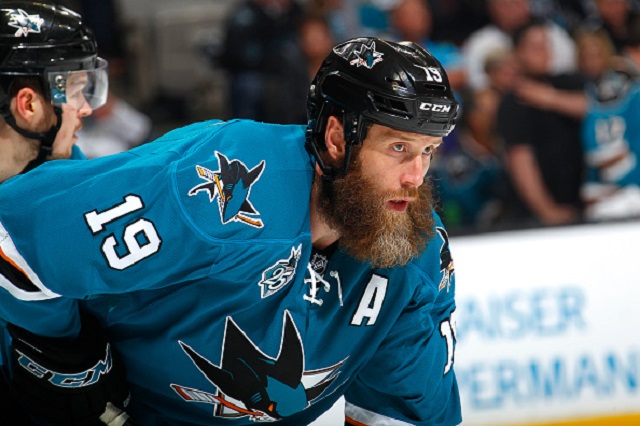 NHL free agency is just around the corner, so let’s all have a big fantasy about where Joe Thornton will go next summer. Let’s also play F-M-K with three random movie franchises because that’s what we do here. Then let’s talk threesomes involving NHL owners and The Price Is Right because that’s what a good mailbag does. Mailbag!

What should Joe Thornton do? He's old but definitely could help a team like EDM MTL or NAS

Thornton should sign for the minimum with the Penguins. I can’t be any clearer about this. he has earned close to a $100 million in his career and since he hasn’t spent any of it on razor blades the past few years, it’s safe to say he has most of that money in a bank account somewhere. He’s rich in ways few people can ever comprehend. He could give me $1 million right now and he wouldn’t miss it. He should do that, actually.

Imagine him on the Penguins’ third line, centering Phil Kessel once in a while and quarterbacking the second power-play unit. Who is stopping the Penguins next season? Nobody, that’s who.

I want super-teams in the NHL and the Penguins adding Thornton gets me closer to that dream. Make my dreams come true, Jim Rutherford.

How do we get the NHL to use Plinko to select/announce the NHL Draft order?
Surely even Bettman appreciates Plinko, or does he have no soul?

I’m for this. I’m for anything that isn’t the current system of Bill Daly holding up cards that require me to remember what happens with the team that gets bumped out of the spot which now goes to the team that… you know. Drop chips into slots, let Drew Carey announce the picks.

By the way, Drew doesn’t get enough credit for the seamless transition from Bob Barker to him. The Office couldn’t transition from Steve Carell to any new boss and Drew took that super-long microphone from Bob and ran with it. It’s the best shoe-filling in recent history, just ahead of Didi Gregorius taking over for Derek Jeter and Cory Schneider taking over for Martin Brodeur.

Pretend you're Shattenkirk. Your best offer is from the Sabres, but its contingent on weekly 3somes with terry and Kim pegula. Do u take it?

Hall and Eberle for Larsson and Strome. How excited is McDavid to sign an extension and commit his prime to such a great organization?

McDavid has been there for one full season and it ended with the Oilers falling one goal short of the conference finals. Unless something catastrophic happens next season, the Oilers are going to the playoffs again and they will give McDavid all the money for the next eight years.

And you can understand it. While you and I know the Larsson-Hall and Eberle-Strome trades are bad and giving Kris Russell four years and $16 million is bad, that’s not how he’s wired. Plus, he’s under team control forever, and it’s a vicious sport, so he’s going to take all the guaranteed money he can get.

But what are Carey Price and John Tavares doing, assuming they sign extensions July 1? What is Tavares seeing with the Islanders franchise that makes him want to stay there forever? Is it the constant losing? The lack of security about where the team will play its games? Why in the world (injury, yeah) would Tavares not go to free agency to see what else is out there?

And Price, my goodness. The team is crumbling around you and Marc Bergevin wants to give you seven or eight more years right now. Why would you take it? Who are going to be your defensemen three years from now? Andrei Markov and Shea Weber are a combined 138 years old. Again, injury worries, but Price of all people should be letting the 2017-18 season play out.

Again, give me super-teams. Give me Price and Tavares talking this summer about taking smaller deals next summer to play in… I don’t know, Edmonton? Anywhere in the West, so we can get a Penguins-??? Stanley Cup Final. If the regular season is going to be boring anyway, give me the superstar-laden payoff in the Final.

3 changes to make nhl not a crap league

This is really hard. Die Hard started strong and died out. Same for Lethal Weapon. Mission: Impossible started as one thing and has morphed into this ridiculous action franchise. This isn’t easy.

I’m killing Lethal Weapon. It was just a Die Hard knock-off and nothing about the final two are memorable.

I’m making sweet love to the Mission: Impossible movies. What’s the worst one? The second one? They’ve had a good crop of bad guys — Philip Seymour Hoffman! — and they’ve revamped the cast over the years in ways I enjoy.

I have to marry Die Hard. One and Three are poetry, Two is good, Four has grown on me and Five [remainder of article is unavailable]