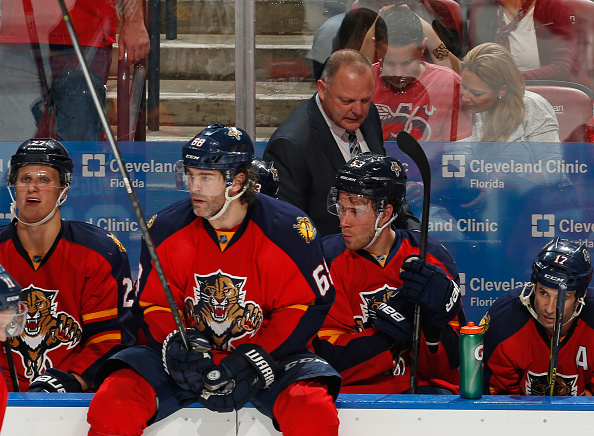 The Florida Panthers stunned the hockey world on Sunday amid reports of head coach Gerard Gallant being fired. Coming off a surprise 47-win, 103-point season and a Jack Adams nomination in 2015-16, Gallant’s job appeared safe. But despite the relative absurdity of firing a coach coming off a great season (and currently one game over .500 this season), there is a method behind Florida’s madness.

The Panthers simply don’t want to settle with relative success.

The franchise hasn’t been shy to gut the organization’s previous regime in an attempt to build a group following the club’s pro-analytics mindset. Hockey operations president Mike Dixon was let go this summer. General manager Dale Tallon was given less pull in the organization, getting “promoted” to a hockey executive position. Meanwhile, Florida loaded up on smart, non-traditional hockey thinkers. Steve Werier, previously a VP of legal and business affairs, was promoted to assistant GM. Assistant GM Eric Joyce’s role with the organization increased. The Panthers also dipped outside the organization, hiring a pair of bloggers with impressive law backgrounds and work in hockey stats.

Turns out, Lu wasn't the only talent to go from Van to Florida. Congrats to Army alum @moneypuck and @joshweissbock, hired by the Panthers

With a quickly changing front office, the Panthers signaled to the rest of the league that they were using stats to try to gain a competitive advantage. It’s not different from what the Toronto Maple Leafs or Arizona Coyotes are attempting, but on a much bigger scale.

But to bring it back to Gallant, why fire him? The Panthers were 11-10-1 without key players. On the surface, Florida might have been overachieving with injuries. But firing Gallant now was the only time to do so. The organization couldn’t fire him following last season’s amazing run. With the Panthers struggling, management decided it was the best chance to strike. Gallant reportedly didn’t see eye-to-eye with the Panthers’ newfound analytical mindset, so despite the bizarre timing, moving on was the best course of action.

Gallant also told the Miami Herald over the weekend that the Thanksgiving benchmark/playoffs correlation is "just another analytics number."

There is a justification to fire Gallant from Florida’s perspective. The Panthers sported a 102.1 PDO last season, a stat measuring even strength shooting percentage plus even strength save percentage, the second-highest rate in the league. It’s a good indicator of luck. The Panthers benefited from a ridiculous 8.84 five-on-five shooting percentage. So their success wasn’t fully sustainable. Under Gallant, the Panthers posted a -0.7 five-on-five shot differential. This season, the rate has increased to -1.4. Florida lucked out under Gallant in 2015-16 and thus far, posted alarmingly similar numbers in 2016-17.

Gallant, who was hired under the previous regime, didn’t fit the coaching mold the Panthers wanted. I can’t say for certainty that general manager Mike Rowe, who’s assuming coaching responsibilities, will fare any better, but at least the Panthers have a coach willing to adapt to their supposedly cutting-edge ways.

Coaching changes aren’t easy to make, especially following perceived success. But, the Panthers looked deep into the numbers and didn’t like what they saw. Being blinded by the win-loss stat is easy to do. Florida unconventionally looked far ahead and made the change they deemed necessary. It’s bold and unexpected. Time will tell if the move pays off.

Who’s on the chopping block next?

With Gallant gone, two coaches should be on the chopping block.

The first is Paul Maurice of the Winnipeg Jets. Winnipeg has won just 10 of 24 games and has been outplayed in the process. Despite possessing incredible, young offensive talent, the Jets offense has sputtered. Winnipeg ranks dead last in the NHL, accumulating a paltry 25.6 shots per 60 minutes at even strength. With talents like Patrick Laine, Mark Scheifele, Blake Wheeler and Dustin Byfuglien, that’s a concern.

Yes, Jets goaltending has been collectively atrocious, with a 24th-ranked .915 even strength save percentage, but Maurice hasn’t done himself favors with odd line combinations. The coach has hurt himself by relying on vets like Chris Thorburn when he’s got a bevy of talented youngsters to use instead. That’s not to say he hasn’t seen success. The development of Laine and Nicholas Ehlers has been encouraging. But how far can Winnipeg really go under Maurice?

Maurice isn’t a bad coach, but he’s limiting the success of his franchise with his slow pace-of-play. If the Jets keep falling, his job will be in jeopardy.

The coach who should be fired, but likely won’t, is Jack Capuano of the New York Islanders. It’s stunning that Capuano is still the head coach, but loyalty goes a long way in New York.

The Islanders sit dead last in the NHL standings with six wins in 20 games. With a talented group filled with vets and youngsters including John Tavares, Brock Nelson, Johnny Boychuk and Ryan Strome, New York seemed primed to challenge for a top seed and be a playoff contender. Instead, the club has been abysmal.

Under Capuano, the Islanders have posted the fourth-worst goal differential at -14. At even strength, the club is bleeding shots and worst, giving up the second-most shot attempts in the NHL with a brutal 46.0 Corsi For percentage. Capuano has hindered the development of multiple youngsters and assembled lines that make no god damn sense.

#Isles will go with seven defensemen with Travis Hamonic returning to the lineup. Expect lines & pairings to shuffle pic.twitter.com/hM6grd7RYh

General manager Garth Snow has expressed confidence in Capuano, a perplexing thing to do considering that it’s his seventh season with the club. Insanity is doing the same thing over and over and expecting the same result. New York is reaching that stage.

The Isles should be very good, but instead, they’re mediocre and that’s on Capuano. Don’t expect much change in New York, unless Snow is fired as well — even if it’s desperately needed.