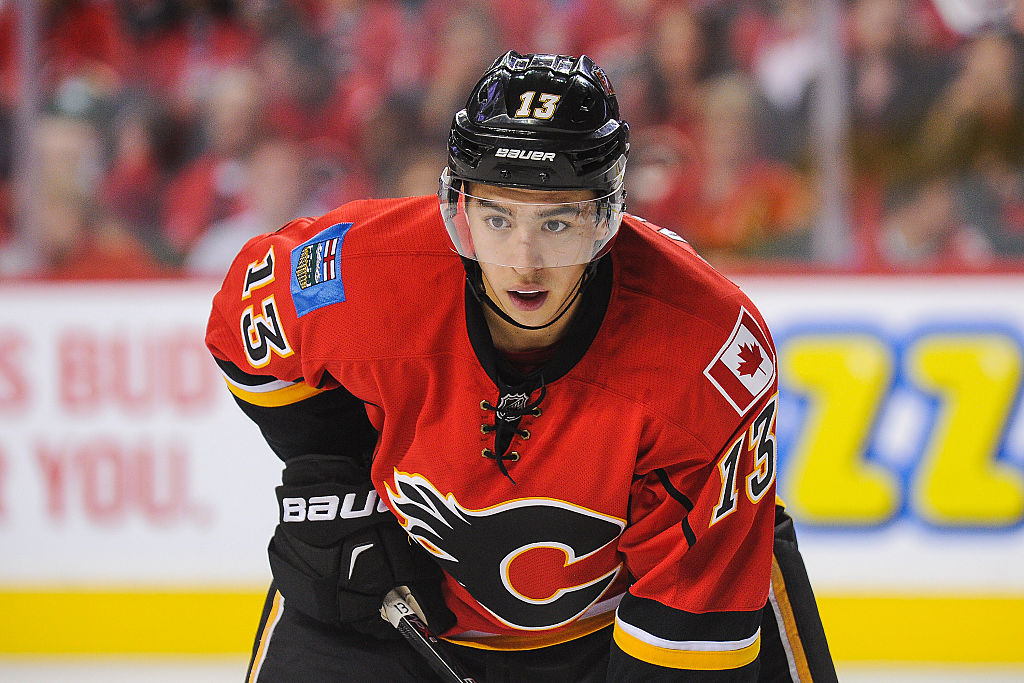 Johnny Hockey is not used to losing. After winning a championship at the minor league United States Hockey League and an NCAA title at Boston College, Johnny Gaudreau’s Calgary Flames are in second-to-last place in the NHL after making the playoffs in his rookie season.

Gaudreau is 5’9” and grew in popularity at around the same time as Johnny Manziel, so the “Johnny Hockey” nickname stuck as his game improved at the collegiate level. Like Manziel, Gaudreau won college hockey’s version of the Heisman Trophy, the Hobey Baker Award. Unlike “Johnny Football,” Gaudreau is staying out of trouble and is using his unique size and skill-set to excel at the professional level.

In an email interview in late October, Gaudreau spoke to The Comeback about his popularity in Calgary and around the league, his Philadelphia-area roots and how the game is becoming easier for smaller, faster players like himself.

After a rookie season in which he scored 24 goals and had 60 points in 80 games for the Flames, earning a trip to the All-Star game in the process, Gaudreau amassed 22 points in his first 25 games this season. This success through the first quarter-plus of his sophomore campaign is coming despite opposing teams now game-planning for him and playing him differently on the ice.

“Coming into my rookie year, I don’t think many people knew me or knew who I was,” Gaudreau said. “I think as the season went on last year, and I started better, the other teams recognized me and tried to key on me a little more.”

Even though teams concentrated on him more, the 22-year-old’s offensive output improved after the All-Star break last season and continues to get better in 2015-2016. That should come as no surprise, given that Gaudreu has been improving his entire life.

Gaudreau was born in the Philadelphia suburb of Salem, N.J. and grew up a huge Flyers and Eagles fan.

“Growing up 25-30 minutes from Philadelphia, it was really special for me to be an Eagles fan,” Gaudreau said. “I got to go to their training camp, meet all the players, and coaches.”

Gaudreau enjoys going on vacation in the nearby Jersey Shore, but let’s not hold that against him. He loves the outdoors, fishing and spending time with his family. And, of course, hockey. As Gaudreau gravitated towards hockey as a child, he looked up to smaller NHL forwards like Martin St. Louis and Daniel Briere, he said.

“Two smaller guys who were in prime of their career while I was growing up,” Gaudreau said. “Getting to watch them, and having Danny Briere play for the Flyers,  that was special because I was a Flyers fan growing up.”

Though he’ll always call New Jersey his home, Gaudreau has embraced Chestnut Hill, MA, where he played at BC, and Calgary. “They’re three really special places to me,” he said.

“I definitely get recognized a lot more than I used to be, from last season,” Gaudreau said. “I think as I played better throughout the season, people started recognizing me a little bit more and people were starting to come up to me more in public. It’s pretty cool to meet people and see how excited they are about hockey in Calgary.”

Gaudreau’s popularity remains strong in hockey-mad Alberta, despite the team’s down season thus far. His fast and exciting play would probably not be possible without rule changes over the last decade that benefitted fleet, speedy skaters like Johnny Hockey.

“I think obviously the stick penalties, the holding, the hooking definitely helps smaller players when you’re small and fast and trying to stay away from those big guys,” Gaudreau said regarding penalties that referees are now told to enforce in order to quicken the pace of the game. “I think it’s definitely changing towards a smaller man’s game.”

Among Gaudreau’s favorite moments from his rookie season were clinching the playoffs against the defending champion Los Angeles Kings and 31-year-old Matt Stajan scoring his first career playoff goal to seal the Flames’ clinching Game 6 win in the Western Conference quarterfinals last April against the Vancouver Canucks.

Though the game is benefitting the smaller player, St. Louis is the only player 5’10” or shorter to lead the NHL in points in a single season since Marcel Dionne did it for the Kings in the 1979-1980 season. But Gaudreau said that the lack of shorter players winning the Art Ross Trophy as NHL scoring champ shouldn’t discourage some of the younger players coming up from pursuing their loftiest hockey dreams.

“I think right now, for minor league players, concentrate on having fun,” Gaudreau said. “They’re young and they’re going through the process but it’s important to have fun, bond with your teammates, learn from your coaches and as you get older, try to improve your game as much as possible.”

Even though Gaudreau is only 22, who knows what small, young, aspiring hockey player is looking to become the next Johnny Hockey? Based on his early career success, Johnny Hockey seems like he’ll be someone that kids look up to for a long time.