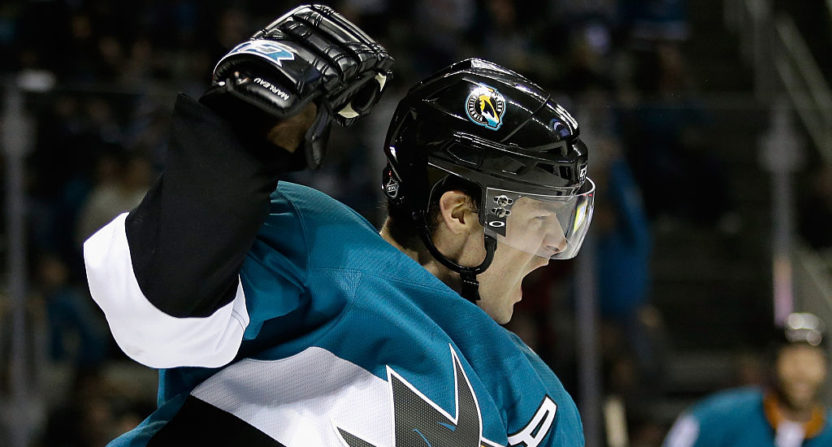 The Toronto Maple Leafs are going all-in next season, indicated by Sunday’s signing of former All-Star Patrick Marleau to a mammoth three-year deal worth $18 million. The move was first reported by the team.

In theory, the 37-year-old is an excellent fit with the Maple Leafs. He’s a four-time All-Star coming off back-to-back 25 goal seasons (27 in 2016-17) in San Jose, the team he’s been with since getting drafted 2nd overall way back in 1997. Alongside the Leafs young nucleus of Auston Matthews, William Nylander, and Mitch Marner, Marleau is a solid choice as a veteran leader with offensive upside.

Head coach Mike Babcock loves Marleau’s game, even if he doesn’t do the one thing he’s getting paid to do.

Babcock on Marleau: "Even if he doesn’t score the goals, he can skate. … He can play against the best people and do it right every night."

Hockey-talk aside, it’s a borderline bad contract for the Leafs.

First off, Marleau’s point production has declined in four straight seasons, as he’s gone from averaging 0.85 PPG to just 0.56 PPG last year. While he can still score, there’s little reason to believe he’ll be more than a 45-50 point scorer – making his three-year contract look more like an anchor than a long-term benefit.

Darren Dreger of TSN.ca reports Marleau’s contract is structured in a front-heavy fashion, as he’ll earn $8.5 million, $6 million and $4.25 million per season respectively. It’s smart for Toronto to shift the money around but adding that much money, especially three years from now is a tad worrisome. Matthews, Marner, and defenseman Jake Gardiner will all need new deals and won’t come cheap. If the Leafs needed to buy out Marleau’s final season, they would get no cap relief due to his deal coming at 35+.

At 37 yrs old, Patrick Marleau's contract is 35+ deal. Meaning if he were ever bought out by the #Leafs, it would bring them no cap relief.

Unquestionably, the Leafs believe Marleau will continue to be an effective NHLer at that point. But, if he continues declining at the rate he’s at, the deal could be a major headache for the club in three years time.

It’s a perplexing, somewhat fascinating deal. Toronto clearly thinks their window is open (rightfully) and added a high-profile veteran to add alongside many talented youngsters. After a couple of seasons signing smart, savvy short-term deals with veterans, the Leafs saw a big name and broke the bank to sign him. Did they overpay to land Marleau? Yes, badly. But, the potential short-term benefits are intriguing enough to see why the Maple Leafs thought bringing in Marleau would help their contention plans in the present.

Again, at the end of the day, this contract could hurt Toronto as players closing in on age 40 rarely perform to expectations on long-term contracts. However, Toronto fans should be excited to see the front office accelerating the rebuild a smidge. Bringing in Marleau represents an immediate culture change, who’s long-term benefits are still completely up in the air.