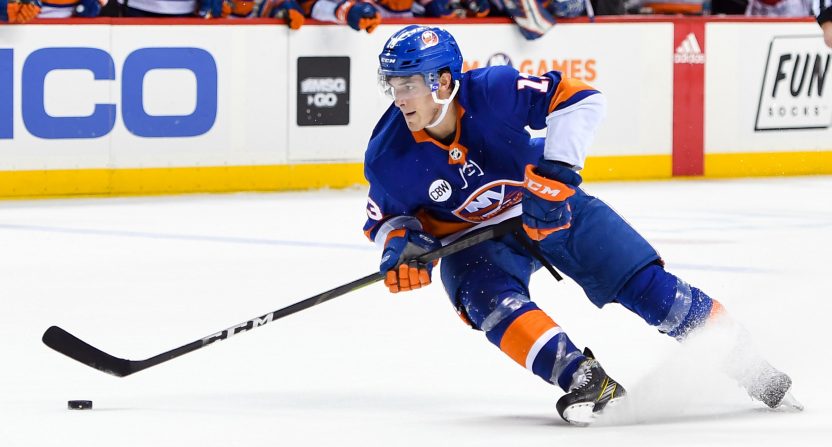 The NHL is loaded with some truly awesome young talent. Auston Matthews (21), Connor McDavid (21) and Patrik Laine (20) are three of the league’s best who you should know thanks to their nearly constant highlight-reel plays.

But one player you may not be as familiar with is 21-year-old Mathew Barzal of the New York Islanders. Despite winning the Calder Trophy as the league’s best rookie for the 2017-18 season, Barzal’s overall profile continues to trail behind the other young stars in the league. It’s time for that to change following yet another impressive achievement by the Isles forward.

In 2018-19, Brazal so far has 16 points in 17 games, scoring two goals and 14 assists. While his goal scoring total is lower than fans would like, Brazal is off to one of the best starts in franchise history. After skating in his 101st career game, he now has 101 total points. He narrowly missed becoming the 11th player in the last 25 years to score 100 or more points in his first 100 games. By comparison, former Islanders star John Tavares tallied “just” 66 points in his first 100 games.

The early success doesn’t appear to be getting to Brazal’s head. As seen in Newsday, Brazal says he has just been trying to get used to the size and speed of the NHL.

“It’s just been a fun ride the last year and a bit. It went by quick. There’s ups and downs being the first 100 games, getting used to the speed and the size of these guys up here. I’m just trying to adapt and keep playing my game.”

There’s a couple of points to take away from that quote. First, if Barzal is still adapting to life in the NHL, one has to wonder just how high his ceiling can go. What will he be able to accomplish once he’s more comfortable? That’s a scary thought for opposing defensemen.

Beyond that, one also has to wonder how Barzal will handle the inevitable slumps that plague any offensive skater. He says he has had his ups and downs, but he hasn’t really seen what a bad stretch in the NHL looks like. A player with 101 points in 101 games hasn’t been challenged when everything seems to be going wrong. It’ll be interesting to watch how Barzal handles adversity when the points aren’t coming.

Summarized, you need to start watching this guy. He’s a dynamic offensive player who can acts with poise and confidence on the ice. Some believe he’s one of the quickest in the league when he has the puck on his stick. That’s difficult to measure, but it is really exciting each time he picks up the puck.

Check back later this season to see if he’s able to hit 150 points in his first 150 games.