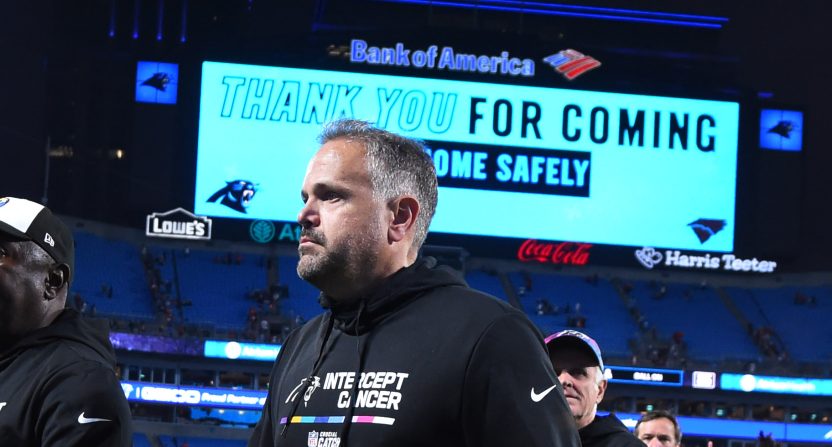 There’s no denying that Matt Rhule did a great job in college football while the head coach at Temple and Baylor. But there’s also no denying his stint in the NFL as head coach of the Carolina Panthers has been a disaster. And a lot of people around the NFL world are wondering when that stint will be coming to an end.

Rhule came into the 2022 NFL season in make-or-break mode following two five-wins seasons to start his time in the league. However, despite all of the efforts to try and improve things, including trading for Baker Mayfield, the Panthers find themselves at 1-4, tied for the worst record in the league. With a road game against the Los Angeles Rams and a visit from the Tampa Bay Buccaneers coming up, there’s a reasonable chance that they’ll be 1-6 by the time that’s over. And at that point, few people see a path forward for Rhule as a head coach here.

Matt Rhule is, I assure you, a good college coach who'll rebuild a program sometime soon. There's no reason for this to continue in Carolina. Not a pro coach, not special, not what Tepper thought he was. Happens. No shame. Off to Lincoln or Tempe and happiness. I've seen enough.

It was clear Matt Rhule wasn’t going to work out for the Carolina Panthers at the end of last season. Instead of cutting his losses, David Tepper brought him back like he was some distressed bond he could flip. Doesn’t work that way! pic.twitter.com/Giv05WaAJn

According to Mike Florio at Pro Football Talk, there’s good reason to think Rhule will be fired sooner than later. While he signed a seven-year, $62 million contract after the 2020 season, it’s hard to imagine it’s worth it for owner David Tepper to keep him on because of that. We’re already at the “ask the coach about his own job security” portion of the process. Plus, Rhule would be a very hot commodity in the college football world, so he might even see it in his own best interest to be jobless by the time November and December roll around and major programs are looking for a rebuilder.