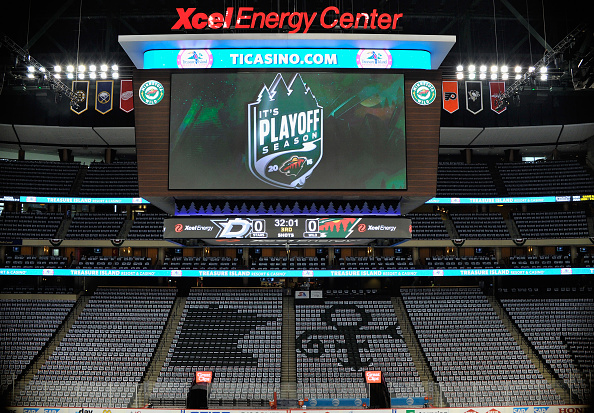 The sporting world has been paying their respects to Prince over the last couple days, but the Minnesota Wild took their tribute to another awesome level. Prince, one of the most famous individuals to have been born in the state, was recognized in several different ways as the Wild hosted the Dallas Stars in Game 6 of their first round playoff series.

Prior to the game, the rally towels placed on each seat were arranged to form an image of the state of Minnesota next to Prince’s iconic logo.

Someone even arranged the pucks on the boards prior to the game to spell out Prince’s name.

A moment of silence was held prior to the opening faceoff.

A moment of silence for Prince. pic.twitter.com/EBCwKseSbS

Video of the pregame tribute:

The tribute extended to the game itself as the club decided to change their goal song for Game 6 to Prince’s “Let’s Go Crazy” over their traditional song. Apparently the team almost went with alternating songs, but they settled on “Let’s Go Crazy” for the afternoon.

"Let's Go Crazy" will be the #mnwild goal song today. They were thinking pregame of maybe alternating between that and Delirious, too

That’s a pretty significant tribute as the goal song is a major part of a team’s identity.

The Wild found their first goal in the third period and the new goal song played after the horn.

Unfortunately, the Wild were knocked out of the playoffs despite an incredible late rally.