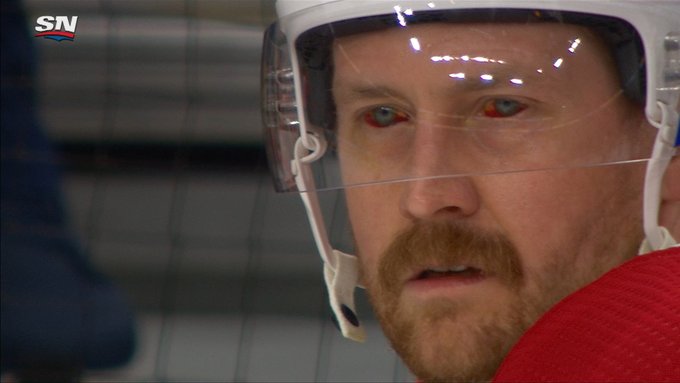 Ahead of Game 2 of the Montreal Canadiens-Vegas Golden Knights series Wednesday, lots of discussion popped up around the remarkably red look of Canadiens’ defenseman Jeff Petry’s eyes. Here’s some of that:

Jeff Petry’s eyes looked like something out of a horror movie 😳 pic.twitter.com/HtKrzyIONH

What the HELL is with Jeff Petry’s eyes? See what happens when you let the Canadiens run loose in Vegas for four or so days? pic.twitter.com/4v0ZX7B1PU

Petry’s wife Julie explained on Instagram that this wasn’t about him being out drinking, but rather related to his “upper-body injury” (which came when he caught his hand in a photo cutout in the glass during Game 3 against the Winnipeg Jets). He missed Game 4 of that series as a result, and missed Game 1 of the Vegas series. And she said that his eyes actually look better now than they did. Here’s that screenshot, via Sportsnet’s Eric Engels: 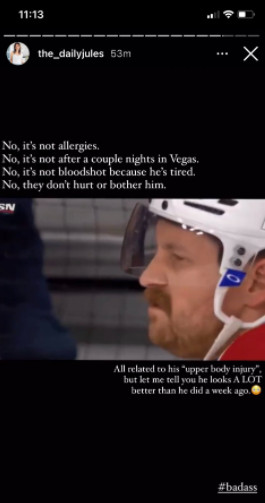 Here’s more of what she wrote, via Stu Cowan of The Montreal Gazette:

“No, it’s not pink eye,” Julie wrote. “No, it’s not a reaction to an injection, anti-inflammatory or pain medication. Look up subconjunctival hemorrhage. Pretty bad case of it due to what he’s gone thru last week. So, that should be that. Keep on with the memes, tho, they are making me laugh!”

During the game, Sportsnet’s Kyle Bukauskas also reported that this was a subconjunctival hemorrhage. On Thursday, following the Canadiens’ 3-2 victory (Petry logged 20:47 of ice time with two shots, an assist, and a +1 rating), Sean Fitz-Gerald of The Athletic got some interesting comments on just what that means from optometrist Dr. Patrick Tracey, who works with the CFL’s Toronto Argonauts and has worked with the San Jose Sharks and the Las Vegas Raiders (while they were in Oakland):

“If you happen to break a little blood vessel on the white part of the eye — and if it bleeds — it just spreads. It’s like putting ink on a flat surface and then putting a piece of plastic on top of it. It will just spread underneath it.”

…“It looks like something out of a horror movie. But it’s pretty innocuous and not really an issue.”

…“It just looks like hell. But it doesn’t really pose any problem.”

Tracey told Fitz-Gerald conditions like this can occur from sudden pressure surges of blood to the eyes, and while the bloodshot look fades over time, full recovery may take a week or two weeks. He added that it doesn’t cause pain, and “It has no effect whatsoever on the functioning of his eyes.” So the main downside for Petry from this particular injury is jokes about his eyes’ appearance. He found an upside to that too, though, as Cowan writes:

But he did talk about how his wife prepared their three young sons for the first time they saw their father with his bloodshot eyes.

“My wife gave them a warning and they came in and didn’t want to look at me and decided that I would be the villain and they would be the superheroes and we started playing,” Petry said. “That got them to relax and feel a little bit more comfortable now.”

The actual big injury Petry is battling is to his hand. The team hasn’t disclosed details of exactly what’s wrong, but many reports have it as two dislocated fingers on his right hand. That caused him to wear a special glove designed by Patrick Langlois, the Canadiens’ assistant equipment manager, which provides extra padding while still letting him handle the puck. And that seemed to work out pretty well for him Wednesday. But, hey, between the eyes and the power glove, if hockey doesn’t work out, maybe he can star as a Marvel villain.

[The Athletic, The Montreal Gazette; photo via Tim and Friends on Twitter]