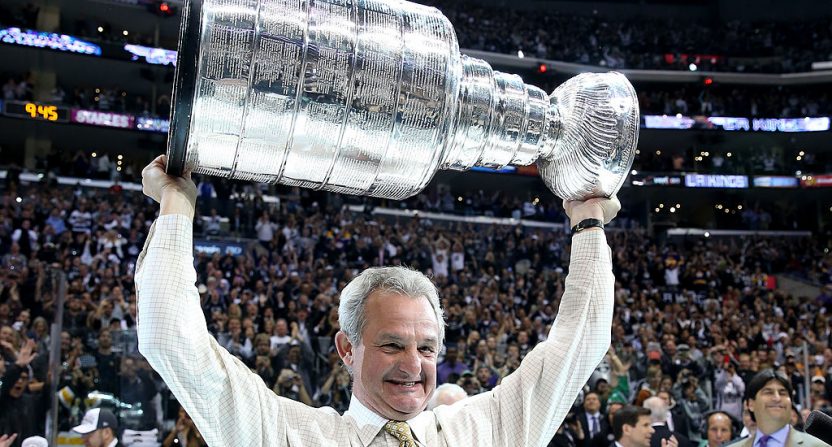 It’s the time of the season for NHL coaching changes, and boy, did Monday deliver. Three coaches were given walking papers for various reasons.

Here’s who will be looking for new jobs after a chaotic day:

Well, here’s a shocker. After six seasons and two Stanley Cups, Sutter was canned after an unlucky, below average year in Los Angeles.

Nothing went right in L.A. The Kings were without star goaltender Jonathan Quick for a majority of the season and had a miserable time trying to score at even strength shooting 6.2 percent, dead-last in the league.

Per usual, the Kings controlled possession and were solid defensively. However, Sutter’s hard-ass attitude and controlled play style seemed to have worn thin on Kings ownership. Fittingly, GM Dean Lombardi also received the pink slip after enabling players and giving out one too many extensions. Rob Blake will take over as GM.

The shit-show is over in Florida.

President of Hockey Operations & General Manager Dale Tallon will immediately begin the search for our next head coach.

Rowe, the Panther’s acting GM, was put in the awkward position of taking over as coach after firing Gerard Gallant just 21 games into the season. What was supposed to be a promising season hit the gutter fast, as Florida never elevated their play with the change, finishing well out of a playoff position.

In this case, it was the right move. Rowe was overmatched as an NHL coach. Dale Tallon will reassume GM duties and a more experienced coach will take over in Florida.

Simply put, general manager Jim Benning failed to construct Desjardins an adequate roster to compete with. Unsurprisingly, the Canucks were terrible finishing with a not-so-nice 69 points. Desjardins is by no means a great coach, but he’s an excellent scapegoat for Benning and Trevor Linden’s failure.

Desjardins will likely toil in the AHL before showing he’s ready for a full-time NHL gig. The split is the best for both parties.

Technically, Ruff wasn’t fired. The Stars opted not to renew Ruff’s contract on Sunday. But, his firing his noteworthy for a number of reasons.

After notching 50-wins and a first-place finish in Dallas in 2015-16, Ruff’s Stars collapsed in 2016-17 with just 34 wins. In his fourth season, Ruff lost the room and the Stars never recovered. GM Jim Nill didn’t do Ruff any favors with a poor, depthless roster, but allowing 262 goals in a single season is horrendous – even with defensive issues.

The Stars weren’t trying to be bad and were. It cost Ruff his job. With past success in Buffalo, Ruff should land on his feet sooner than later.