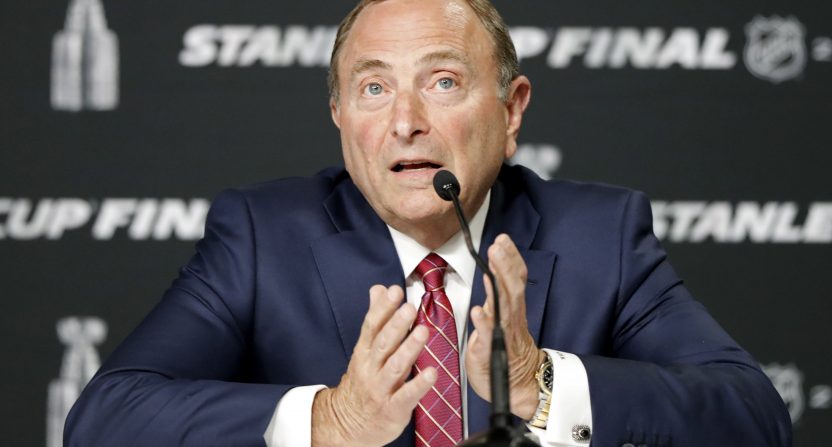 Unless you’ve been completely ignoring the NHL over the past couple months, you’ve heard about the officiating blunders that have transformed important playoff games this year. From a bad major penalty call against the Vegas Golden Knights to a hand pass that everyone but the officials saw, the missed calls have piled up on the game’s biggest stage. The end result has Gary Bettman apologizing, talking about expanding video review and…praising the officials?

In a press conference held prior to Game 1 of the Stanley Cup Final, Bettman openly admitted that what the league is currently doing isn’t enough and video replay might be expanded.

“Clearly, what we already do still may not be enough. If we are to extend video replay — and we will be looking at that possibility — we must find the right balance when it comes to how much more to use and when to use it without affecting the flow, pace and excitement of our game. Perhaps most important, we’ve got to have a system that enables us to be consistent.”

All of that sounds good on the surface. The video replay system that currently reviews whether the puck goes into the net and determines if a player not involved in the play is a hair offside can’t decide if a hand pass occurred to set up a goal. That’s nonsensical. It also can’t review a game-altering major penalty. Expanding what the replay system can assist with is obvious, but there will need to be some difficult decisions made about how extensive the system should be.

Despite Bettman saying what a lot of fans want to hear, he also made a statement that rings a bit naive.

“We want every call to be correct. Everyone does. And while we seek to minimize errors, the speed of our game is unprecedented in its history, and the advances in technology, also unprecedented, have conspired to make the world’s best officials the focus of every call and non-call, which no one can do in real time as well as they do.”

To summarize, Bettman wants to help the “world’s best officials” out with the challenges created by the increasing pace of the game. That’s a rather tone-deaf approach to a problem that has a multitude of layers.

Video review, or the lack of video review, is one side of the officiating problem. The other is the regular inconsistency seen from game to game in the NHL. Some subjectivity is to be expected, but it’s crazy when a blatant hook is called in one instance and not in another. Or how four officials can miss a clear hand pass when they’re all supposed to be looking at the puck. Or how some games have moments where the whistles are put away while other games are called overly tight. How can the league expect anyone to keep up when the rules seem to change from night to night?

Maybe Bettman is just trying to avoid blasting the officials in a public setting. We won’t blame him if that’s the case. But if he really thinks the NHL’s officials are the best in the world, then fans should remain skeptical about the league’s commitment to improving the officiating.