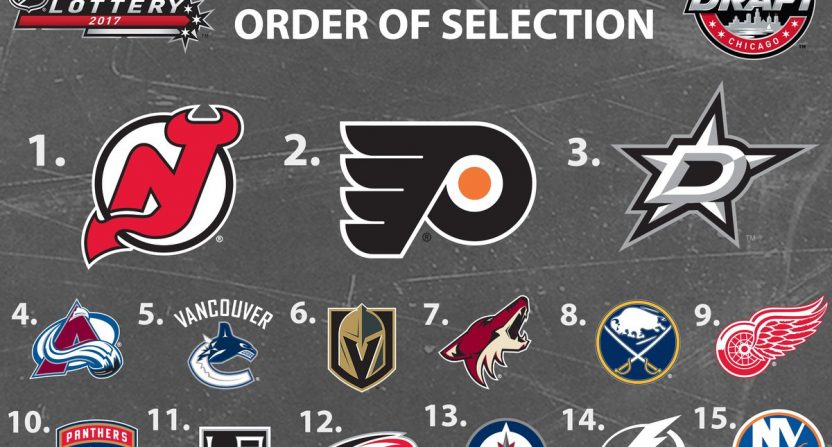 While the NHL’s draft lottery doesn’t generate nearly as much buzz as its NBA counterpart, the 2017 edition proved to be the craziest in league history. The New Jersey Devils won the lottery and moved from slot five to pick first overall for the first time since 1979 back when the franchise was called the Colorado Rockies. Dallas moved up five spots from slot eight to pick third and the Philadelphia Flyers moved all the way from spot 13 to pick second, the highest pick for them in 10 years.

But why this draft lottery was particularly crazy was because of the introduction of the Vegas Golden Knights as an expansion team. They received the third-highest odds to win the lottery, as you can see by this handy chart from Tankathon, and fell to the sixth spot. 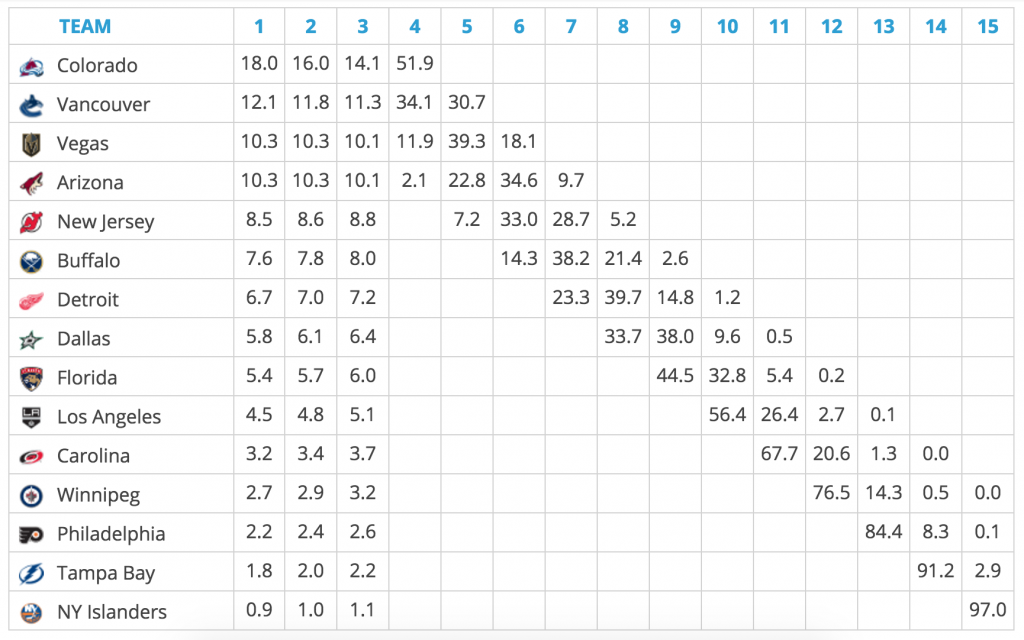 This meant that the team that had the worst record post-2005 lockout, the Colorado Avalanche, slipped all the way to fourth. That’s not much of a reward for having the fewest points in a season (48), since the expansion Atlanta Thrashers only had 39 in their expansion season of 99-2000. They had an 18% chance of picking first overall. The Vancouver Canucks, with the league’s second worst record, slid all the way to fifth and the Arizona Coyotes, who had the third-worst record will end up picking seventh, a drop of three spots. The Devils had an 8.5% chance to win the lottery, the fifth-best chance of any team.

This is the second time the Devils have won the Draft Lottery, after winning it in 2012, but under those rules they were only allowed to move up a maximum of five spots, which put them fourth from ninth. They used that pick to select Adam Larsson.

New Jersey will not have it as easy as Edmonton and Toronto had it the past two years as there isn’t a generational talent at the top of this upcoming draft. There are two very good players that they’ll likely decide between; one is center Nolan Patrick of the Brandon Wheat Kings in the WHL, who some have compared to Jonathan Toews, and the other is winger Nico Hischier, a Swiss winger who scored a ton of goals for the Halifax Mooseheads in the QMJHL. In all likelihood, he’ll be the highest drafted Swiss player in NHL history.

So for the Devils, who haven’t made the postseason since 2012, this is a night of relief and celebration. The same can be sad for Dallas and Philadelphia who should revel in their luck. But if you’re in Colorado, Vancouver, Vegas or even Arizona, you’re wondering how Gary Bettman rigged this lottery against you… sort of.