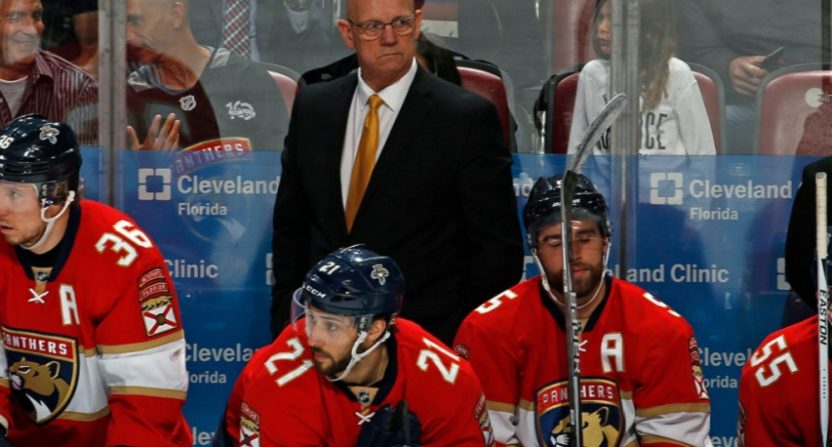 As with every NHL season, with the pleasant surprises come the major disappointments. The 2016-17 campaign was chock full of change in both positive and negative directions, and while there will be plenty of focus on the Torontos and Edmontons of the world, this piece looks at the other end of the spectrum.

Several teams came into this season with hopes and dreams of being playoff and Stanley Cup contenders, but will end up spending April fishing and looking at draft lottery odds. Here are my five most disappointing teams of the 2016-17 NHL regular season that has nearly reached its end:

Under Dave Hakstol, the Flyers surprised almost everyone last season with a late charge to make the Eastern Conference playoffs, and even gave the President’s Trophy-winning Washington Capitals a scare or two in their series when they weren’t being pelted with light-up bracelets. Naturally, more consistency and improvement was expected this season, especially with the organization’s bevy of young players. Then in December, the team ripped off 10 straight wins and expectations increased even more.

But since, they’ve been nothing more than mediocre and now will become the first team in history to have a 10-game winning streak in a season and miss the playoffs. Captain Claude Giroux has had a less than stellar season by his standards with only 57 points and 14 goals, which would be his lowest totals in a full season since the 2009-10 season. And though Jakub Voracek and Wayne Simmonds have been good, they haven’t had the scoring depth up front to challenge in a ridiculously deep Metropolitan division. Hakstol’s management of young players, including the weird and uncalled for scratching of Shayne Gostisbehere multiple times this season has also rung a few alarm bells.

The Flyers are only number five on this list because they are still a team transitioning to younger players all over the lineup, and still have a few unanswered goaltending questions. They didn’t fall too far, but falling at all in Philadelphia is not a good thing for a franchise accustomed to making the postseason. They have some questions they need to answer this offseason; not just about their roster, but whether Dave Hakstol is the man for the future behind the bench, too.

How can a team which missed the playoffs last year and picked by practically nobody to make the postseason in the slaughterhouse that is the Central Division possibly be a disappointment? When you have the abundance of young talent that the Jets do, such as Patrik Laine, Nikolaj Ehlers, and Mark Scheifele among others and still can’t break through, that’s why.

The Jets are preposterously deep with young talent up front, some of which hasn’t even made the NHL yet, but they still have no bottom-six depth to speak of. And even though they managed to get through the Jacob Trouba drama at the beginning of the season, their defense corps have been underperforming again. And since it’s the Jets, it’s hard to not talk about their failures without mentioning the goaltending, which they still haven’t solved.

The Central Division underwent a bit more transition this season than expected, so the Jets have a chance to finally emerge for real next year. But it’s now been six seasons in the ‘Peg with one playoff appearance and no playoff wins, and while that market has been incredibly forgiving, how long can the honeymoon period keep going? They have too much talent and youth for it to keep on going for much longer.

These Kings are not the Kings that won two Stanley Cups in three years, that much is obvious. But when a team goes out and makes a move like they did to get Ben Bishop, you expect that team to at least make the postseason, which the Kings won’t do for the second time since hoisting the Cup in 2014.

Certainly, Jonathan Quick’s opening night injury really hampered their chances in a suddenly brutal Pacific Division. But the biggest issue these Kings have is that they can’t score goals. They are 26th in the league in goals per game, and only bottom-feeding Arizona, Vancouver, New Jersey and Colorado are worse. Anze Kopitar has had a miserable season with only 12 goals and 49 points, which is his worst in a full season in the NHL, period. Only Jeff Carter, it seems, was able to break through the muck. But even then, he’s gone cold when the Kings have needed him the most.

The Kings possess the puck so well and have the system to keep goals out, but their problems putting it in the net have finally caught up to them as the league has gotten younger and faster. And another problem: the Kings are locked into a ton of bad contracts for years and don’t have the deepest well of prospects. It really does feel like the end of an era at Staples Center in more ways than one, and while it’s not entirely surprising, it does feel most certainly disappointing.

The run-and-gun Dallas Stars were one of the most fun teams to watch last season. They scored almost entirely at will, and also played plenty of entertaining games because they couldn’t keep the puck out of their own net either. After winning the Central Division last season, expectations were still high for the Stars to improve defensively, bring on some of the young talent they have and at the very least continue to outscore their defensive and goaltending woes.

Obviously, that didn’t happen. Not only have the obvious goaltending issues continued to bite them repeatedly, their blueline has been a black hole of bad. John Klingberg, who many thought would become a true No. 1 defenseman for Dallas, hasn’t quite met the same heights he did a season ago, and they have absolutely no depth behind him. That entire group has to basically be rebuilt from scratch, and it wasn’t even that special to begin with last year. Jamie Benn and Tyler Seguin have both been very good, but not transcendent level good, which they both needed to be in order to get the Stars back to the playoffs this year.

The sad fact is, the Stars were realistically out of contention in January, which is amazing for a team that had the most points out West last season. They desperately need more scoring depth up front, must rebuild their blueline outside of John Klingberg and finally solve that goaltending mess they’ve somehow stuck with for years. And with Chicago, Minnesota, St. Louis and Nashville in front of them, as well as a Winnipeg team that should theoretically be better, that 2015-16 Stars season looks like the end of something rather than beginning.

Certainly, I am biased here because I watch this team night in and night out, but if someone else can find a more disappointing team, I’d like them to try. For the first time ever last season, the Panthers finished with more than 100 points. They won the Atlantic Division — yes, by taking advantage of a division where all of its powers were saddled with injuries and bad luck — but still won the Division. They had a bevy of young, talented players with plenty of room to grow and improve, plus an unflappable Roberto Luongo buoying them in the net. While winning a second straight division title seemed a bit unlikely, making the playoffs was a reasonable expectation for a team that certainly looked better on paper.

Instead, they fired their transformative coach for no apparent reason in November and in an insult to injury, told him to take a cab home. The team never really recovered from that, even though they swept a five-game road trip in February for the first time in their history. Since then, the Panthers have lost 15 of 20 to fall closer to New Jersey than a playoff spot. The coaching for this team by “General Manager” Tom Rowe has been outright offensively bad, player usage has been insane and asinine, and the front office doesn’t even want to tell anyone who is actually making the decisions in hockey operations. And they want it that way.

All of the trust, goodwill and belief that had been built up has now been entirely thrown away for what appears to be nothing except two egomaniacal owners who thought they could revolutionize hockey ops decision-making and instead ended up with the hockey equivalent of New Coke. And it’s a shame, because there is still plenty of talent here that can, with good coaching, make a decent playoff run. Injuries to key players are no excuses for teams like Tampa and Pittsburgh, so why should they be for a defending division champion?

Instead, the Panthers are now irrelevant in South Florida sports again and threw away their best chance at permanent relevance in 20 years. They are, by far and away, the most disappointing team in the NHL this season.

Honorable Mentions:
Detroit finally missed the playoffs after somehow staving off the inevitable for three years. And Colorado was expected to be OK, but instead became the worst team the NHL has seen since the introduction of the shootout.