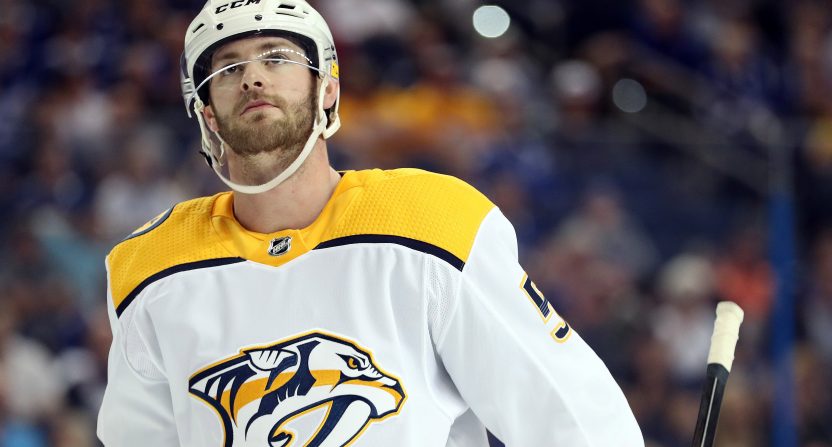 On June 16, Nashville Predators forward Austin Watson was arrested in on a misdemeanor charge of domestic assault. Per police reports, a witness saw Watson “swat” his girlfriend and prevent her from leaving the couple’s SUV. Watson admitted to pushing his girlfriend and a police officer noticed red marks on her chest. Watson’s girlfriend would later say that he “gets handsy,” but pleaded with officers not to press charges fearing what it might do to his career. They did so anyway.

On July 24, Watson pleaded no contest to the domestic assault charge and was sentenced to one-year probation and ordered to complete a 26-week batterer intervention course. At the time, the victim pleaded with the court to dismiss the case but the state went through with it given the fact that they had a witness to the event.

The prosecutor said the reported victim in the case, with whom @PredsNHL Austin Watson has a baby, asked for the case to be dismissed but the state felt due to other witnesses in the case they could still prosecute it.

All eyes have since been on the NHL to see how they would punish Watson as well, given that the league doesn’t have a specific domestic violence policy. Wednesday, the league suspended him 27 games without pay for “unacceptable off-ice conduct.” Watson had already been suspended without pay for the entire preseason.

“I have determined that Nashville Player Austin Watson engaged in a physical confrontation with his domestic partner,” commissioner Gary Bettman said in a statement. “Today’s ruling, while tailored to the specific facts of this case and the individuals involved, is necessary and consistent with the NHL’s strongly held view that it cannot and will not tolerate this and similar types of conduct.”

Per ESPN, the NHL conducted its own investigation of Watson, including a hearing with Bettman himself. The suspension was levied under Rule 18-A of the collective bargaining agreement, though the NHL Players’ Association is filing an appeal on his behalf. The Predators issued their own statement saying that they “supported and worked closely” with the NHL’s investigation.

The 26-year-old is a former first-round draft pick who scored 14 goals and 19 points in 76 games with the team in 2017-18. He’s played his entire pro career with the Predators to date.

The decision not only affects Watson and the Predators but could also have an impact on the league’s next domestic violence investigation. Former Los Angeles Kings defenseman Slava Voynov remains suspended over a 2014 domestic violence incident but is seeking reinstatement to the league. The league says it has no timetable to decide on the matter but now they have a precedent on how they hand out punishment.

Still, rather than handle things on a case-by-case basis, it seems wise for a professional sports league to adopt a standing domestic violence policy given that, sadly, this isn’t an issue that is going away.