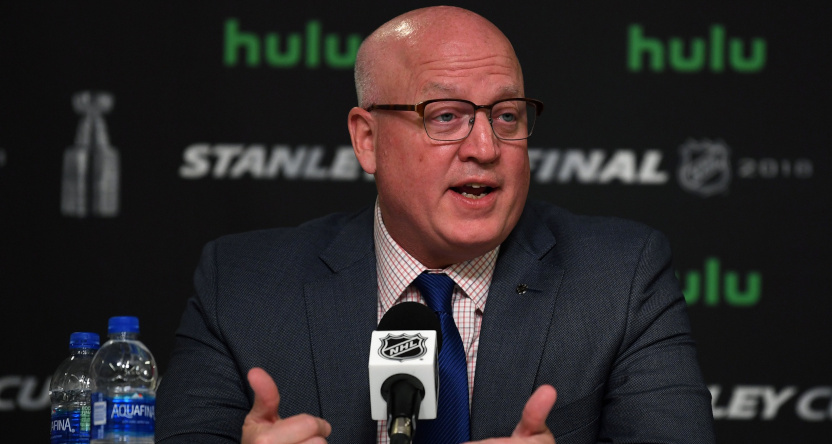 One of the big questions about the NHL’s plans for a 56-game season beginning in January has been about the league’s seven Canadian teams, as the current quarantine restrictions in many Canadian provinces would not normally allow for the frequent travel the league will require in a bubbleless season. And there was talk that the Canadian teams might have to relocate to U.S. arenas for this season (as the NBA’s Toronto Raptors have done, and as MLB’s Toronto Blue Jays did this past season). On Wednesday, though, NHL deputy commissioner Bill Daly seen above during the 2018 Stanley Cup Final) told Pierre LeBrun of TSN and The Athletic that the league believes they have an agreement for their Canadian teams to play in their home arenas this season.

“On the basis of our discussions in the past week, as well as our exchange of correspondence over the last 24 hours, we believe we are aligned and in agreement on the conditions on which each of our Canadian franchises can begin play in their own buildings for the start of the 2020-21 NHL season.”

That isn’t an official joint press release or anything, but it is a notable step towards having these teams play in their own buildings. And it indicates that a long and complicated process of approval may be nearing the end. The league avoided one pitfall with a temporary divisional realignment putting all the Canadian teams in their own division, meaning there will be no Canada-U.S. border crossings until late in the postseason (and thus avoiding Canada’s mandatory quarantines for travelers from abroad), but there had still been issues considering that the interprovincial travel these teams will be doing will be in a way that isn’t currently allowed for average citizens.

As TSN’s Frank Seravalli reported Wednesday, the five Canadian provincial authorities with jurisdiction over NHL games sent a joint letter (written by Alberta Health chief medical officer Dr. Deena Hinshaw) to the league this week providing two options. They called for either a bubble model similar to what the league did last season, or an increased schedule of testing and reduced interprovincial travel earlier in the year.  Here’s Seravalli’s description of that second option, which seems to be what the league is going with given Daly’s comment about “in their own buildings”:

The first option called for a “regular testing schedule for players, staff, coaches and close contacts, with close household contact testing required if players are living at home between travel episodes.” It also asked for “enhancing the schedule … to group games into blocks to limit inter-jurisdictional travel between provinces.”

“Specifically in the early part of the season, it will be important to make these considerations wherever possible,” Dr. Hinshaw wrote.

Currently, the NHL’s protocol calls for daily testing for team members only during training camp and the first four weeks of the regular season. After that, the need for daily testing will be re-evaluated. In addition, family members are only tested “when requested,” and it is at the cost of the players.

The provincial health authorities’ request might also require the NHL to readjust the schedule that was released on Wednesday. The Canadiens, Senators and Maple Leafs all travel out to Western Canada in January in the first weeks of the season.

And TSN’s Darren Dreger added Thursday that the league and the players have agreed to additional testing, and will also make their players available for provincial health announcements:

The NHL and NHLPA are on board with additional testing, if needed and are both committed to using some of the games top stars in CoVid related provincial public service announcements. https://t.co/kZYFpPVUly

So it appears the path is relatively clear for these teams to play in Canada this season after all. We’ll see what final details emerge on this plan.