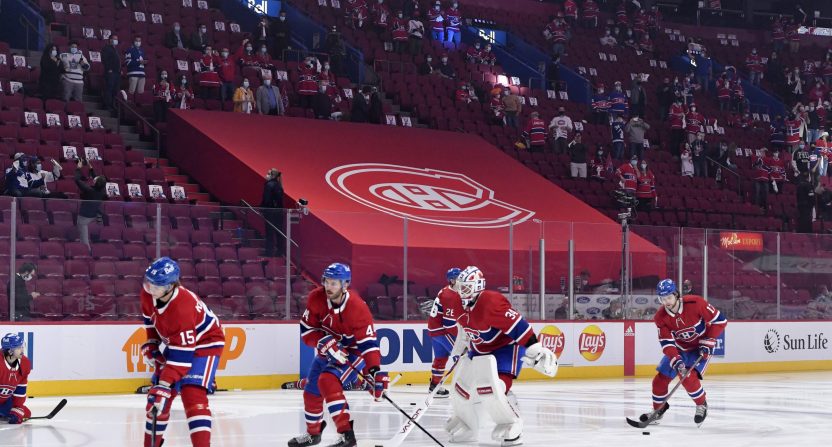 When the NHL realigned itself for the 2021 regular season so that all seven Canadian teams were in their own division, there was always a looming question waiting for it in the Stanley Cup Playoffs. Given that cross-border travel between Canada and U.S. was stopped, there was eventually going to be a playoff series pitting a Canadian team versus an American team that required someone to visit the other country.

The potential plan was that the eventual winner of the Canadian division would relocate to the United States for the semifinals and, presumably, Stanley Cup Finals. However, the NHL and Canada announced Sunday that they have come to an agreement that will allow for cross-border travel beginning with the Stanley Cup semifinals.

Under the agreement, any NHL team traveling from the U.S. to Canada will be able to play so long as they follow certain enhanced health protocols. Teams will need to travel by private plane and all players and staff are subject to daily COVID-19 testing. Once they are in Canada, any U.S. teams will have to live inside a “modified quarantine bubble” and are not allowed to make any contact with the public at large.

“The National Hockey League is very appreciative of the decision by the Canadian government and the Federal health officials to allow the Canadian team that advances to the Stanley Cup Semifinals and, potentially, the Final, to host games in their own rinks,” the NHL said in a statement.

Normally, the Canadian government is requiring all foreign travelers to quarantine for 14 days when they arrive, which would have made it impossible for the Stanley Cup Playoffs to maintain its schedule while sticking to their normal playoff formats.

It’s been 28 years since a Canadian team won the Stanley Cup. The last team to do so was the Montreal Canadians, who coincidentally lead their series 2-0 against the Jets. Game 3 is scheduled for Sunday evening. The Avalance currently leads the Golden Knights 2-1 in their series.