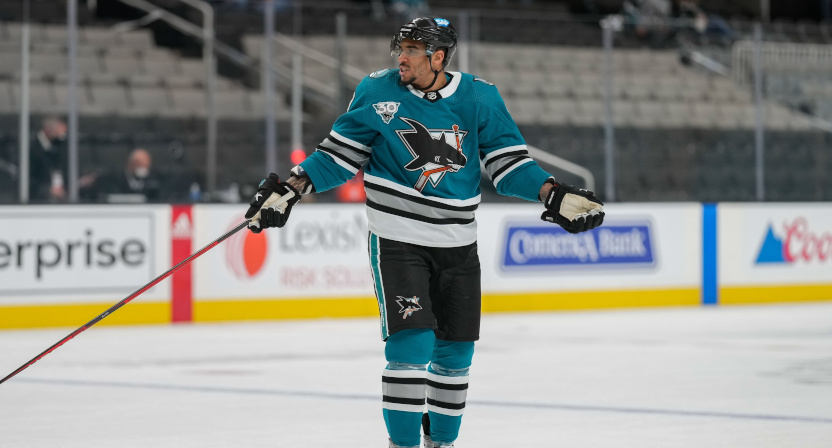 Most professional sports leagues have gone to different levels of COVID-19 protocols for vaccinated and unvaccinated athletes (as well as coaches, executives, and other personnel), but a big question there is what happens when an athlete lies about their status. In the Canadian Football League, that led to the Edmonton Elks releasing offensive lineman Jacob Ruby in August, and to the CFL itself banning other teams from signing Ruby (through at least the remainder of this season) the next day. In the NHL, though, a similar offense has reportedly led to just a 21-game suspension (without pay) for San Jose Sharks’ forward Evander Kane.  Here’s more on that from Curtis Pashelka of The (San Jose) Mercury News:

The NHL dropped the hammer on Evander Kane, suspending the Sharks forward for 21 games without pay on Monday for an established violation of — and lack of compliance with — the NHL/NHLPA COVID-19 Protocol.

Kane, who was being investigated by the NHL for the possible use of a fake COVID-19 vaccination card, will not be eligible to play prior to the Sharks’ Nov. 30 game in New Jersey against the Devils.

…In a statement made through the NHL Players’ Association on Monday, Kane apologized to his Sharks teammates, the organization, “and all Sharks fans for violating the NHL COVID protocols. I made a mistake, one I sincerely regret and take responsibility for. During my suspension, I will continue to participate in counseling to help me make better decisions in the future.

“When my suspension is over, I plan to return to the ice with great effort, determination, and love for the game of hockey.”

In a statement, the Sharks said, “While we are encouraged by Evander’s commitment to moving forward, we are extremely disappointed by his disregard for the health and safety protocols put in place by the NHL and the NHLPA. We will not be commenting further on Evander’s status prior to the conclusion of the NHL’s mandated suspension.”

This is only one of the several investigations around Kane. Last month, Kane’s estranged wife Deanna filed for a restraining order against him in court, alleging that he committed sexual assault and domestic violence against her. She also alleged that he gambled on NHL and Sharks’ games. However, the NHL-commissioned investigation on the gambling front concluded last month with a statement that the hired firm (Patterson Belknap Webb & Tyler LLP) ” found no evidence to support those allegations, or allegations that Mr. Kane made any effort to negatively impact his own Club’s games.” And their statement on the current suspension for Kane included that they’re not taking action against him on the sexual assault and domestic violence allegations:

The NHL announced Sept. 22 that there was no evidence to support those claims but that two additional investigations into Kane had been opened. The NHL announced on Monday that those two allegations could not be substantiated.

Perhaps the largest thing here is the question of if a 21-game suspension without pay is enough of a punishment for what Kane is alleged to have done here on the fake vaccination card front. Yes, that’s certainly a significant penalty, especially for someone who filed for bankruptcy in January and is already the subject of a lawsuit on if his ongoing NHL income should be used to pay off his millions of dollars in debts. But it’s much less than what the CFL’s Ruby wound up with (a release and a barring from the league). And it feels like it may be awfully hard for Sharks’ players and coaches to trust Kane as part of their organization when he’s (allegedly) put them all at increased risk of a potentially-deadly virus (which has been cited as responsible for more than 720,000 U.S. deaths by the Centers for Disease Control and Prevention, and which has had horrible long-term effects on several NHL players).

Of course, some of that is on the team rather than the league. The Sharks can put out all the “extremely disappointed” statements they want, but so far, they have not imposed any supplemental discipline on Kane. They could absolutely part ways with him if they wanted to (as the Elks did with Ruby), and they haven’t done that yet. And it is worth discussing whether harsher sanctions here should be the responsibility of the team or the league, and there are arguments for both.

In any case, though, it looks for the moment like this may only lead to a quarter-season suspension for the 30-year-old Kane. And yes, he’s been a useful piece for the Sharks, posting 30, 26, and 22 regular-season goals (in 75, 64, and 56 games respectively) the past three seasons. But the flurry of issues around him at the moment raises quite a few questions about why the team hasn’t yet parted ways with him, and if they’ll eventually make that call.

The other aspect to consider here is if other athletes will eventually be caught with fake vaccine cards. So far, there haven’t been a lot of those stories around specific players. But there was a Defector piece from Kalyn Kahler last month titled “Fake Vaccine Cards Are A Real Problem For The NFL,” with quotes like “two NFL agents who work for different agencies told Defector that players they represent asked them for help getting a fake vaccine card. (Both agents declined to do so.)” and further discussion that one requesting player got the idea from a teammate who had a fake vax card. And that piece spotlights how difficult it can often be to check these cards. So there may be more athletes out there currently using fakes, and we’ll see if they ever get caught.