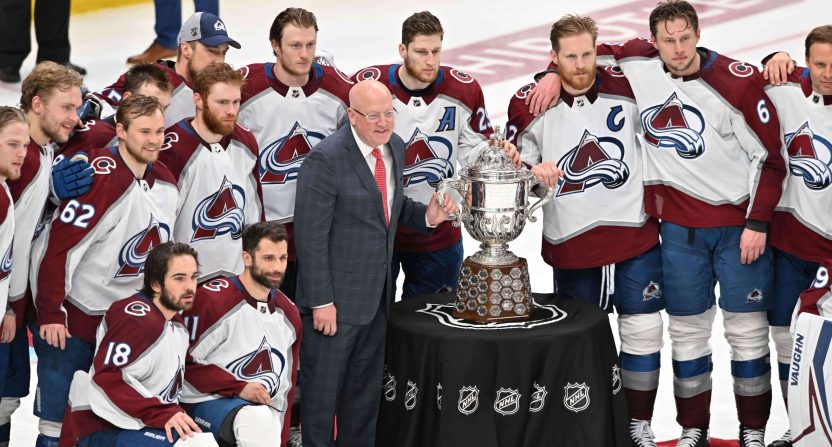 The Colorado Avalanche are going to the Stanley Cup Final, and they needed only four games in the conference finals to make it happen.

Colorado completed a four-game sweep over the Edmonton Oilers with a 6-5 overtime victory in Game 4 on Monday night.

It was an incredible, back-and-forth hockey game, but the Avs found a way to get it done as they have all series.

The Avs trailed 3-1 entering the third period, but Devin Toews scored just 31 seconds into the period to get Colorado within one.

The Avs score quickly in the 3rd period on a deflection! 🏒 pic.twitter.com/5fGqfsALPF

Edmonton later regained a two-goal lead, but Gabriel Landeskog scored with 11:02 remaining in the third period to make it a 4-3 game.

A wild, back-and-forth Game 4! The Avs score and pull to within a goal, 4-3. 🏒 pic.twitter.com/QvU4RjRXcA

With 6:30 remaining in regulation, Avs star Nathan MacKinnon showed off his burst and found the back of the net to tie the game 4-4.

And just over a minute later, Colorado took a 5-4 lead on a power-play goal from Mikko Rantanen:

The Oilers, fighting for their lives, were able to tie the game back up at 5-5 on a goal from Zack Kassian with 3:22 remaining in regulation.

But just 2:19 into overtime, the Avs completed the sweep on a goal from Artturi Lehkonen.

THE COLORADO AVALANCHE ADVANCE TO THE STANLEY CUP FINALS! 🏒 pic.twitter.com/N1crd44vcE

Colorado will face the winner of the East final between the New York Rangers and Tampa Bay Lightning for the right to hoist Lord Stanley’s Cup. New York currently has a 2-1 lead in that series.

FiveThirtyEight gives the Avs a 66% chance to win the Stanley Cup. The Avs have won two championships, with the last one coming in the 2000-01 season.

Here’s a look at how the hockey world is reacting to a wild Game 4 and the Avs’ Stanley Cup Final berth:

Always, I know
You’ll be at my show @Avalanche

🏒Rallied from a 2-goal deficit TWICE. On the road.

Last year, Artturi Lehkonen was Montreal's hero; this year, he is Colorado's.

For the 2nd straight postseason, Lehkonen scores the OT goal to clinch a Stanley Cup Final trip. He is the 2nd player in NHL history to do so, joining Gordie Drillon in 1938-39 for Maple Leafs. pic.twitter.com/uy3HZg9JRd

The Oilers are the first team in NHL history to have 3 games in a single postseason where they scored 5+ goals but still lost.

4 wins from a parade #GoAvsGo

The Avs have as many road wins this postseason as the Rockies do this season — 7.

Denver big-four sports: A potential Stanley Cup winner, a basketball playoff perennial with a two-time MVP, a football team with a future Hall of Famer at QB, and … pic.twitter.com/dSIIZTuha3