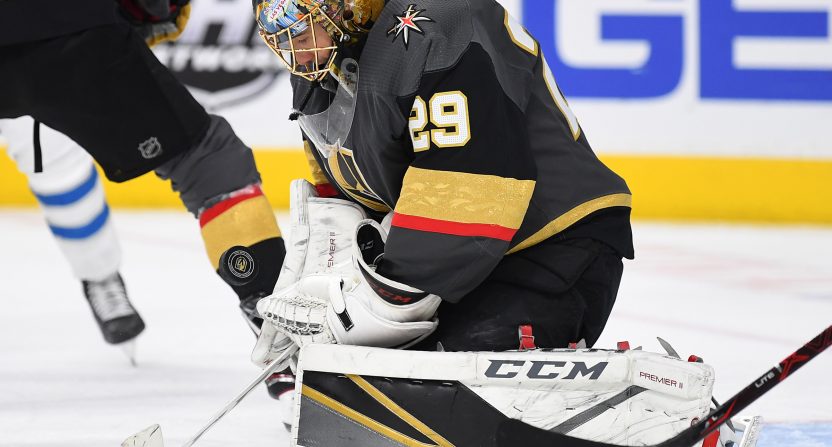 The NHL recently held its annual General Managers meeting to discuss how the league can improve moving forward. The topics discussed ranged from speeding up the pace of play, tweaking penalties in overtime, and altering the current review/replay process.

Thankfully, the GMs realize that the NHL doesn’t need to adopt any sweeping changes. Scoring is up to the highest it has been since 2005-06, most of the league is at least competitive and battling for playoff spots and Vegas is still thriving as an expansion franchise. Forcing significant changes when the game is in good shape would be a major misstep.

However, there’s always room for some improvement. The GMs did discuss some minor alterations that could smooth out the pace of play and address some inconsistencies. Additional details and rule proposals may come up before the meetings conclude.

Despite the pace and speed of the game sitting in a solid spot, the GMs discussed a change that goalies probably won’t like. Thankfully, padding isn’t the point of contention this time.

The idea was to encourage goalies to freeze the puck less often in order to keep the game flowing. The discussed change would prevent the goaltender’s team from making a line change when the puck is frozen.

In theory, the idea isn’t a bad one, but it may only make sense on paper. Treating the goaltender freezing the puck like you would an icing call seems a bit drastic when it’s rare to see a goaltender freeze a puck that could have been played.

This is one of those no-brainer changes. It’s kind of weird the officials aren’t involved in the Situation Room’s reviews in the first place.

There was also an idea that would allow the officials to review an incident before assessing a major penalty.

Does the penalty format in overtime still make sense? As it stands, the 3-on-3 format transforms into a 4-on-3 scenario when the opposing team commits a penalty. However, assigning a full two-minute power play in a five-minute period may be a bit too harsh.

As always, the league is constantly trying to address player safety. Whether or not they’re doing a good enough job of protecting their players is up for debate.

The general managers discussed reviewing punches to “unsuspecting opponents.” There’s no additional information on what that means, but it would theoretically mean players could face additional discipline for sucker punches that aren’t immediately caught.

The current definitions for the roughing and charging penalties could also be changed. One would imagine the wording would be tweaked to be more inclusive and specific.

Based on all of the discussions so far, the NHL is clearly in a better position than it has been in previous years. Instead of focusing intensely – and perhaps a bit too much – on trying to boost scoring, the league can clean up some of the areas that need a bit of attention.

One area that still needs to be defined is the overall consistency of the league’s officiating. It’s one thing to crack down on a certain infraction, such as holding or interference, but it’s an entirely different task to make sure penalties are being called consistently across the league.

It’d also be nice to see the NHL make some changes to its current playoff format. It’s nonsensical that three of the league’s top-5 team are guaranteed to be eliminated by the second round or earlier.

Deputy commissioner Bill Daly made it sound like the league is more than satisfied with the current format, as evidenced by his comments on TSN.ca.

“I would say that there doesn’t appear to be a consensus or desire for change. The current system has done what it was intended to do. It’s emphasized and featured rivalries in early round matchups. And that has generated enhanced interest and better [television] ratings.”

It seems odd that the NHL is comfortable with their top teams being knocked out so early due to their format, as it flies in the face of their ratings and rivalries logic. Hopefully, this point will be addressed in the future.