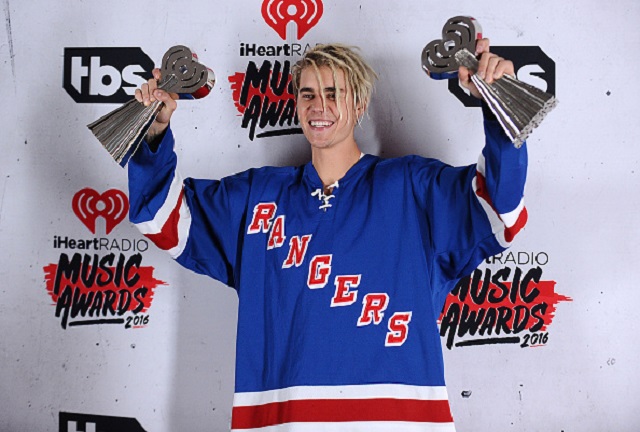 If you like the way this mailbag looks, then maybe you should go and love yourself. That’s a Justin Bieber reference. He’s in the mailbag. So is Ryan O’Reilly and Jack Capuano. It’s the final mailbag of the regular season!

1. I Belieb He Looks Fly

@davelozo why do teams continue to give Bieber jerseys?

Justin Bieber has 78.5 million Twitter followers. According to Business Insider, he’s the ninth coolest, most famous person in the world, and you know when Business Insider says you’re cool, you’re cool. That’s the sort of cool you can’t purchase on margin, fella.

When Bieber is photographed in an NHL jersey and it gets on social media, people in the league’s marketing department literally orgasm. Literally. It’s awkward when they are on a train and and begin trembling in a crowded quiet car at the sight of Bieber in a Rangers or Coyotes jersey on Twitter, but it’s great for the league.

Since you brought up Bieber, I’d like to take a moment and quickly mention a thing that bothers me about his somewhat new song, “Love Yourself.” I heard it like 10 times before I realized it was him. The song is fine. He has a nice voice. It’s a bluesy, smoky tune that’s easy on the ears… except for the lyrics.

For those of you that aren’t hip and cool and young like yours truly, this song is what the kids may call a “diss track” or a song that “throws shade” at an ex-girlfriend. Maybe it’s because Bieber is Canadian, but it’s some of the funniest, saddest shade that’s ever been thrown.

Here are the key parts of the song:

My mama don’t like you and she likes everyone

‘Cause if you like the way you look that much
Oh, baby, you should go and love yourself

Let’s say this song is about Selena Gomez. Imagine her friend sits her down and says, “Selena, girl, Biebs’ new song just dropped and it’s about how he’s over you and hates you.” Can you imagine the panic? Bieber, one of the most famous humans on the planet according to an esteemed business website, a man with 78.5 million Twitter followers, is going after you in a song.

You sweat. You shake. You think about all the intimate moments you shared. All of your insecurities rush to the surface. You wonder what he mentions in the song and are dreading hearing it, because you know it will be a hit. You debate listening to it but decide you have no choice.

You get home. You fire up Spotify. You listen. You cringe. You listen some more. The song ends. You laugh. You laugh harder. Why are you laughing? Because it dawns on you that the best diss that Bieber had to offer in a four-minute song about you was…

…MY MOMMY DOESN’T LIKE YOU AND SHE LIKES EVERYONE!

That’s about as polite and Canadian as it gets.

2. Masterton of my domain

Honest question: Why doesn’t Ryan O’Reilly deserve to be nominated for the Masterton? Why does his DUI matter?

Last week, the Buffalo chapter of the PHWA — of which I am a national member — nominated Sabres center Ryan O’Reilly for the Masterton Trophy, which is awarded to the player who “best exemplifies the qualities of perseverance, sportsmanship, and dedication to hockey.”

O’Reilly — allegedly, as the case is still pending — drunkenly drove his truck into a Tim Hortons and fled the scene on foot before he was arrested. This happened about two weeks after he joined the Sabres and 10 days after he signed a $52.5 million contract extension.

Seeing the obvious insanity of O’Reilly’s nomination, which he basically earned because beat writers watched him practice hard this season, I made a Twitter joke. Others wrote more scathing pieces. Every team gets a nomination, so having one of 30 be bad isn’t a huge deal, but this was an obvious target for ridicule and deserved all the mockery it got.

A man who drove drunk, crashed into a Tim Hortons and fled the scene before the year is a Masterton nominee. Maybe 30 nominees is too many.

Mike Harrington of the Buffalo News doubled down on the decision in his Sunday column, citing among other things, that driving drunk and crashing into a donut dispensary isn’t a big deal because, “No one was injured so that’s not relevant.”

But Harrington (I think, because he didn’t confirm this, as I’m not from Buffalo, and he only interacts with people from Buffalo) called me out in this column as, “one NHL Web writer not currently working full-time for any site.” That describes a lot of people who laughed at this nomination but it fits me, so I’ll assume it’s me, because I’m very self-involved and everything is about me.

So, Mike, if crashing into a building and fleeing a scene drunk doesn’t matter because what happens off the ice doesn’t matter, then let’s talk about Buffalo’s 2015 Masterton nominee, Mike Weber.

This piece is written by John Vogl, not Harrington, and it’s fine, as there is nothing wrong with Weber as a nominee. But in this piece, one of the reasons Weber is the nominee is because he “sponsors the ‘Tickets for Troops’ program and donates tickets to every home game to members of the military, with the honoree invited to the dressing room after the game.”

So the lesson here is off-ice stuff, when it’s positive, counts. When the off-ice stuff is drunkenly careening into Canada’s watered-down version of Dunkin’ Donuts, it does not matter as long as the guy has post-practice sessions with teammates.

Who should the nominee have been? How about Chad Johnson? The Sabres don’t have any truly great stories of perseverance, but Johnson is a 2006 fifth-round pick that toiled in the AHL for years, is having the best season of his career and it’s with his fourth organization in four years. Hollywood won’t make a movie about Johnson’s journey, but it’s a perfectly fine Masterton resume despite the fact he doesn’t practice long enough for the Buffalo PHWA chapter’s liking.

No one is saying O’Reilly should be shunned for the rest of his life because of a DUI. When I was his age, I drove drunk many times. I’m not proud of it, much like O’Reilly isn’t proud of his incident. But if I had been arrested 10 days after starting a new job and brought shame to my employer, then was awarded with an employee of the year honor, yes, the people who gave me that award should be mocked. The fact that I stay late at the office and train younger guys doesn’t change what I did.

If I were truly dedicated to my profession, I wouldn’t have selfishly endangered the lives of others during time off. But this is coming from “one NHL web writer not working full-time for any site,” and not a full-time newspaper man, so what do I know?

3. Should the Islanders fire Jack Capuano if they miss the playoffs?

The Islanders won Game 6 and lost Game 7 and, yes, Lee wasn’t doing much in the series, but offensive production isn’t what made the move so bad.

And Lee was rewarded with a healthy scratch in the next two games. That’s the type of thing that doesn’t sit well with players.

Claude Julien is probably going to be available this summer. Capuano isn’t getting anywhere close to the most out of the Islanders roster, which has a few holes but is better than what it has shown. If the Islanders don’t fire Capuano eight seconds after Julien becomes available, move the team to Kansas City and free Islanders fans of this torture they do not deserve.

4. What is the best hockey movie?

The Cutting Edge. Next question.

@davelozo time to move from the Krejci era ?? Me thinks YES !!
Colorado ??