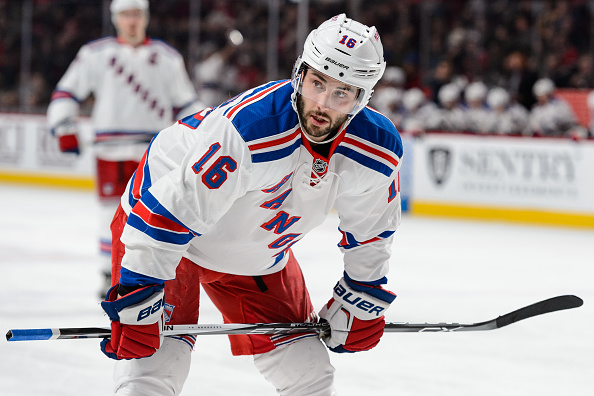 Holy moly! There was a meaningful NHL trade in July! What should we make of it? What the heck is happening with analytics and the NHL if the Canadiens aren’t listening to their people? And if you had a follow-up question for The Fault In Our Stars about Hazel and pot, we’ve got you covered there too. Mailbag!

@davelozo How do you not see this as a positive trade for NYR. Zibanejad=Brassard, and he's younger and cheaper. 2nd rd pick > 7th.

This is me roping Dan Rosen of NHL.com (and my friend!) into the mailbag because he engaged me in a circular, semantic argument about the Derick Brassard-Mika Zibanejad trade Monday and it’s way easier to have a deeper opinion here than on Twitter.

The full trade was the Rangers sending Brassard and a seventh-round pick to the Senators for Zibanejad and a second-round pick. Brassard, 28, has a $5 million cap hit ($10 million in salary) over the next three years while Zibanejad, 23, has a $2.625 million cap hit and becomes an RFA next summer.

This is why I don’t understand it for either team.

Ottawa’s perspective: They aren’t on the cusp of a championship; at best, they are the cusp of the playoffs. They added a (maybe) slightly better player who is five years older and costs more money, at least now. Brassard was raised about a 25-minute jog from Ottawa, so as Canadian franchises love to do, they added a local boy. It truly is a mystery why the Stanley Cup has stayed in America for two-plus decades.

If Ottawa gave Zibanejad a six-year deal with a $4.5 million cap hit starting next year, assuming he took it, they’d be spending nearly the same dollars in cash over the next three years as what they are for Brassard, while retaining a cheaper, younger, potentially better player over that time period. Heck, even if it’s the same cap hit as Brassard now, why not do that?

No team that’s won the Stanley Cup has ever said, “Without having players on the roster who by accident of birth grew up near the place where we happened to build our arena, we would not be here. If we had more players from a greater distance from this plot of land, this would not have happened!”

Sure, the Senators save a few bucks in actual dollars because of the structure of Brassard’s contract, but if things are so desperate that a few million bucks are forcing trades of good, young players, maybe you shouldn’t have an NHL team.

New York’s perspective: Over the past two seasons, Brassard led the Rangers in regular-season points (118) and over the past three seasons, he was second in postseason goals (16), and first in assists (16) and points (32). He was a No. 1 or 1A center, was well worth $5 million per season, and there was no reason to believe he wouldn’t continue to produce over the duration of his contract.

If we assume Zibanejad matches Brassard’s production, it’s a wash. Yes, the Rangers save about $2.7 million cap space this year, but they’ll just have to pay Zibanejad about $5 million per season going forward, same as Brassard, if he finishes with around 60 points next season. The thinking here is that down the road, Zibanejad will be a 70-point player, but that’s no guarantee and, again, it doesn’t make the Rangers better now.

If the Rangers use the extra 2016-17 cap space to improve their defense and not just pay their RFAs Chris Kreider and Kevin Hayes, then it makes a lot of sense. Otherwise, the Rangers have a look of a team that doesn’t want to commit to a rebuild and are content to shuffle some chairs on their sinking ship. They are, at best, the third-best team in their division and more likely fourth behind the Penguins, Capitals and Islanders. What does this deal to help?

This trade seems like an even, fair deal that gives the big-market team cap relief and the small-market team a bigger contract. It’s something.

@davelozo in light of your tfios review, who are your top three most annoying teen male protagonists in any media

@soIaces @davelozo i'm seconding this follow up question, how would you choose to feed drugs to your dying teenage daughter

ICYMI, I reviewed The Fault In Our Stars as part of our summer Millennial Divide series in which old-ass me partakes in things meant for young people. There’s a scene in the beginning where Hazel talks about pot and her parents won’t get it for her. She has bad lungs, so she can’t smoke — she can walk up stairs and make out in Anne Frank’s attic, though — so my suggestion was edibles.

The only weed edibles worth enjoying are cookies, brownies and Sour Patch Kids.

As for the worst teen male protagonists:

When you get right down to it, the Canucks are the Ross of the NHL.

@davelozo will analytics ever find a legit presence in front offices, or should teams set up intangibles departments instead?

I feel like we have come so far in the past five years, yet are still so far away from hockey getting to the point of baseball today. If your franchise is trading PK Subban for Shea Weber straight up, despite an analytics person in the room pleading against it, that franchise is slipping behind the times in a way that’s damaging long-term.

(I’m talking about Montreal there, in case it wasn’t clear)

The Canadiens letting their analytics person walk isn’t unique. It’s not the only place it has happened. Some of the hires are for show, while some front offices genuinely want that analytic voice in the room. One franchise has an analytics person that refuses to watch any game film whatsoever for fear of it tainting the numbers. There is no shortage of ways to incorporate analytics into talent evaluation, but if it’s being shut out completely like it was in Montreal, that’s a problem.

Prediction for 2016-17: The Habs will become a battle cry for why analytics don’t matter. Why? Because with Carey Price back next season, the Habs will improve on their 82 points no matter what. People will see that and make snide comments about people who laughed at the Weber-Subban trade, ignoring the fact that having .930 goaltending instead of .900 goaltending is the big reason for the turnaround.

Imagine that situation in football. Let’s say noted cheater Tom Brady missed the final 12 games of next season with an injury after playing the first four. Patriots start 3-1 and finish 6-10. There wouldn’t be a football writer on the planet saying anything other than, “The absence of Brady, the Patriots’ most important player, derailed their season.”

Nobody would come forward and say, “The Patriots need to trade Rob Gronkowski because he’s too outgoing and he disrupts locker room chemistry. They need to get grittier and tougher to turn this around.” That person would lose their job and sent to a mental institution.

In hockey, that person gets to run the Montreal Canadiens.