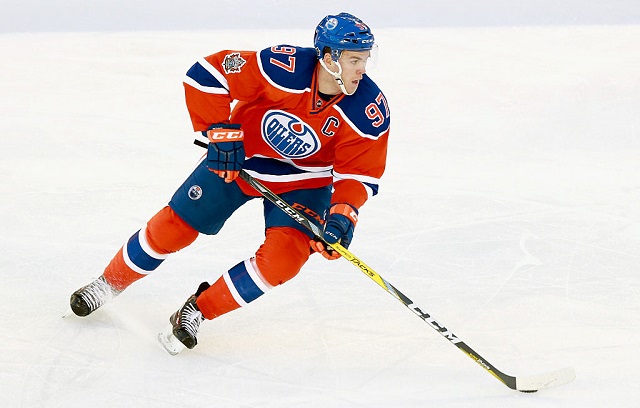 It’s the day after a dark day on the NHL schedule, so maybe that’s why this 10-deep mailbag has so many questions about food and Halloween candy. There’s also a McDavid/Crosby question, one that will get asked throughout the season and one about the abundance of goaltenders, but most importantly, is there a sandwich better than a Cuban? Mailbag!

@davelozo is McDavid better than Sid?

As recently as three weeks ago, I would have thought this question to be insane. But, in my best Julian Sands from Ocean’s Thirteen voice, it’s legitimate.

There will be stretches this season where McDavid will be without question worthy of the Best Player In The NHL title. But Crosby will remind people he’s still the Best Player In The NHL at different points. By next year, I’d say it will be McDavid. He’s like nothing else in the league at the moment, sort of like when Crosby was in his first two seasons. This season, it will go back and forth between them as long as they are healthy.

It’s not as though Crosby is a 15-goal, 68-assist guy who can’t score goals, but McDavid is such a finisher. And he’s faster than Crosby when he was Peak Crosby. You know how when you play street hockey, you can stop on a dime and make goalies look silly in a way you can’t when you’re on skates? McDavid on skates is like any other human in sneakers. It’s like the laws of ice and skate blades and edges don’t apply to him. He has the potential to be a perennial 100-point in a league desperately in need of them.

Meat In The Middle

@davelozo Is there a hot sandwich that's better than the Cuban?

@davelozo How do I deal with a world where there's a better trade market for Ondrej Pavelec than Jaroslav Halak?

It wobbles my mind that there aren’t more trades in the NHL. General managers have an aversion to making deals like I have an aversion to waking up before 8 a.m. It’s especially weird this year, when there are teams like the Islanders, Penguins and Lightning that have an extra goaltender and the Kings, who fancy themselves contenders, haven’t made a deal for someone on those teams and the Stars continue to ride their terrible combo.

The thing about Pavelec is, yes, he’s bad, but he’s only signed for one more year and he’s cheaper than Ben Bishop and he’s better than what the Kings have. I’m not sure why the Islanders would trade Halak unless they were getting someone like Jacob Trouba in return. The Halak-Greiss combo is solid, and got the Islanders to a second-round playoff series last year, yet J-F Berube is hanging around for some reason. But, yes, it seems odd that Halak isn’t a hot commodity when he could probably get the Stars to a Cup Final.

I also think every NHL general manager is the guy in your fantasy league that overvalues all his players and refuses to make trades. NHL GMs love their guys and they especially love their goaltenders. The Blues traded Ben Bishop because they had young Jake Allen, but they also waited until the summer. Maybe the Kings are going to ride out the storm until Jonathan Quick comes back and all these teams trade their goalies in the summer. The NHL is weird, man.

@davelozo going to movies by yourself; better or worse than mixing candy and popcorn?

People who put candy into popcorn at the movies should be jailed for at least 10 years. I’d rather see every movie alone for the rest of my life than reach into some shared popcorn and pull out a Whopper. It’s unholy. I’d walk out of the theater and never speak to that person again. I don’t even know what I’d do if I was holding popcorn in my lap and someone dumped Mike and Ikes in there. I’d call the police.

What’s In A Name?

@davelozo why do they call him MadBum instead of Angry Anus?

His name is Madison Bumgarner. It’s not Angus Angroson.

@davelozo Fasting, Circus Peanuts or Candy Corn if you could only choose one for a day

The tone of this question seems to suggest circus peanuts are something less than delicious. Candy corn is garbage. Fasting is for… whoever does that, I guess.

@davelozo You have a time machine. Would you go bavk in time and be on the Titanic vogage with the knowledge you have now?

If I had a time machine, no, I would not go back in time and kill myself.

@davelozo what movie do you think should be remade? i.e. What movie had a great premise but horrible execution?

“Brewster’s Millions” would be great today. It was great then, but it could use an update. Change it to billions.

Monty runs for office to lose money and lose the race intentionally. Hmmm, do we know anyone today that’s burning money and seems to be trying to lose an election on purpose? There would also be a bitcoin joke to make it #modarn. I’ve thought about this for a while and I’d write the hell out of it.

@davelozo Carlo Spooner 1st for Trouba, you do it if you're the Bruins?

To close this week’s mailbag I will say that, yes, if I were the Bruins, I would trade Carlo Spooner The First for Jacob Trouba.