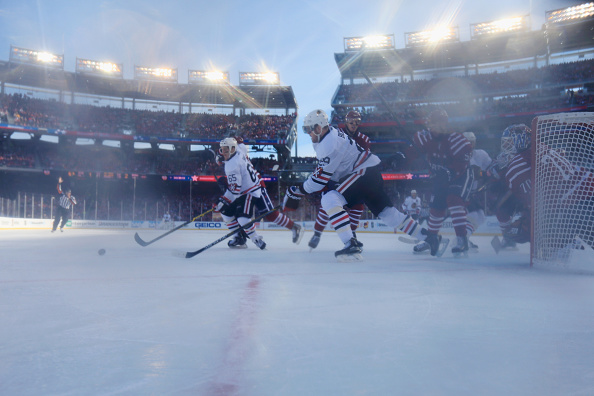 Before drinking heavily on Dec. 31, be sure to line your stomach with solid food and The Comeback’s weekly hockey mailbag!

1. How come Dale Tallon doesn’t get the recognition as a great builder of teams? He basically built Chicago’s dynasty, got punted, and now his Florida creation is in 1st place in the division (as of the writing of this email) and yet we don’t hear about him too often.

The perception of general managers in the NHL is subject to great fluidity and mystery. Most times, it isn’t based on anything real. People consider general managers geniuses or idiots. No one ever says, “That GM is perfectly adequate at his job.” Being a GM is practically an art form because it tends to be so subjective.

If you look around the mainstream media, general managers are rarely panned. The two big reasons for that are simple: a majority of them truly are nothing more than average, so there’s nothing to be said, and general managers possess inside information and no one wants to piss off the guy that can freeze you out whenever he wants. Stream through stories of hockey’s biggest media personalities and you’ll be lucky to find one story knocking a GM’s work.

Remember the shocked reaction of the hockey world when Ray Shero was fired? Media types had no trouble questioning the abilities of Dan Bylsma toward the end of his time in Pittsburgh, yet the guy who was trading two second-round picks for Douglas Murray rarely found himself in the crosshairs. Shero spent years whiffing in the draft but because he’s universally considered a nice man, he rarely caught any flak for the Penguins’ diminishing returns.

There are also general managers who are considered to have stumbled into good teams or received the benefit of years of high draft picks. So few GMs arrive at a garbage dump and turn it into a high-rise, luxury condominium through guile and shrewd moves, or, at least, that’s not the perception.

GMs have this Neo-like way of dodging bullets in most media markets; beat writers that are straight news people don’t call GMs into question as it’s not part of their job and nearly every market outside of Canada lacks a columnist that’s on that team’s radar regularly. Sure, whoever is running the Toronto Maple Leafs will hear about how they’re doing their job quite often, as will GMs in most Canadian markets, but that’s practically the exception.

Look at Marc Bergevin in Montreal. He just received an extension. To me, he’s an example of a GM that is perfectly adequate at his job. He had Carey Price, PK Subban and Max Pacioretty when he was hired, signed them all to less than market value to various degrees, and has just as many hits as misses otherwise. A month ago, he received an extension for his work; today, he’s giving votes of confidence to his coach and swinging deals to fortify a backup goaltending spot he ignored for two years despite having an oft-injured Price as the team’s backbone.

The reason for all that before getting to Dale Tallon is to make a point. He can be whatever you want. Yeah, he built the Blackhawks, but it’s nice to have Shero serving up Jonathan Toews on a platter in the draft one year and Patrick Kane sitting there at No. 1 the following year. Then he goes to Florida and spends five years doing mostly nothing but again amassing high picks. He did well by drafting Nick Bjugstad and Alexsander Barkov and acquired Roberto Luongo and Reilly Smith in favorable deals, but he also felt the need to back an armored car to Dave Bolland’s door and sign Shawn Thornton for two years.

You don’t hear about Tallon because he works in a market with minimal media coverage and a tiny fan base and the team has one playoff berth in five seasons that was fueled mostly by the loser point. A case can be made that success is cyclical and after five years, this season was inevitable with anyone making the picks. Yeah, he has a Stanley Cup, but so does Jim Rutherford.

I’d say between 20-25 GMs are downright impossible to judge with certainty and Tallon is one of them. You tilt your head one way, he’s a builder of good teams; tilt it another way, and he’s someone that hangs around long enough that the worm has to turn. I’ll let you tilt your head in any direction you choose.

Me? I think Tallon is perfectly adequate at his job.

It’s crazy to me that it’s 2015 and fans still don’t get this. Because of the points system, we’re never talking about winning percentage in the NHL; it’s points percentage. In your example, 12-7-5 is way above average, as it’s a 99-point pace and more than enough to get into the playoffs.

If you think about it, a team can go 22-8-52, collect 96 points, and be a playoff team. You can lose 60 games and probably earn home-ice advantage in the first round.

Free your mind of wins and losses meaning what they should mean. The NHL did a long time ago.

@davelozo who will leave his original draft team first: Stamkos or Crosby? #FillDavesMailSack

To borrow a line from Groundhog Day, when Ralph is drunk and asked if he wants to throw up in the car or outside the car, “I think … both.”

I guess the answer is Stamkos, because he’s a pending UFA on a fringe playoff team who likes tweets about him playing in Toronto. If and when Crosby goes, it will be after July 1, 2016, so the odds favor Stamkos and I don’t feel like gambling here.

From 2009 until Stamkos broke his leg in November 2013, he averaged 1.17 points per game; since the injury, he’s down to 0.84 points per game. If that’s the new norm for Stamkos, general manager Steve Yzerman may not feel like paying $11 million per season for a player with a points per game average on par with Eric Staal or Marian Gaborik.

As for Crosby, if the Penguins miss the playoffs this season and he believes that will be the new norm in Pittsburgh, he’ll have to decide between his love for the city and desire to not have his career wasted more than it’s already been. I don’t see him asking for a trade this summer but if the Penguins are officially done as a Cup contender for the next five years, it behooves Crosby and the team to make something happen while he still has trade value and good years left.

@davelozo Do think the Stamkos situation is affecting Tampa's slowish start to the season? #FillDavesMailSack

I hate people that pretend to know the minds of people that are constantly on their guard when speaking to you. Maybe Stamkos answers questions about his contract, gets in his car, drives home, flips on a little Empire of the Sun and plays Call of Duty without a care in the world. Or maybe he gets in his car, screams while punching the steering wheel, goes to a secret underground fight club and beats newbies until they are black and blue to shake the stress of a multi-million dollar negotiation. I have no idea.

Here’s what I know: Stamkos is on pace for 35 goals, his worst total since his rookie season. Tyler Johnson has missed a third of the season and has just four goals. Ondrej Palat and Jonathan Drouin have only played about half of Tampa’s games. Valtteri Filppula has three goals. Ryan Callahan has five goals.

The Lightning have so many players that aren’t scoring and a few key guys have missed significant time. The team’s possession numbers are still pretty good. My prediction is Tampa takes off in the second half once everyone gets healthy and rested and the financial situation of Stamkos isn’t the reason why so many players are underperforming.

5. The greatest compliment you can receive

@davelozo Who is the NHL's equivalent to Eli Manning? #FillDavesMailSack

-lives in the shadow of his brother

-doesn’t have an athletic physique

-is a nice boy

He won the Cup with the Kings in 2012 and 2014, isn’t exactly the ideal candidate for a Crossfit commercial and is a very nice boy.

Of course, you’re probably thinking that Anze’s brother, Gasper, isn’t exactly Peyton Manning if he’s toiling in the ECHL with the Manchester Monarchs. And you’d be right. But you’re forgetting about Anze’s other brother, the one we all love more because he truly is a good boy.

Gustl Kopitar, like Peyton Manning, has fewer championships but will always be a media darling because he’s so much better in front of the camera. It’s only a matter of time before Gustl tries to convince me Papa Johns is edible pizza and is named in some more illegal milk bone shipping scandal.