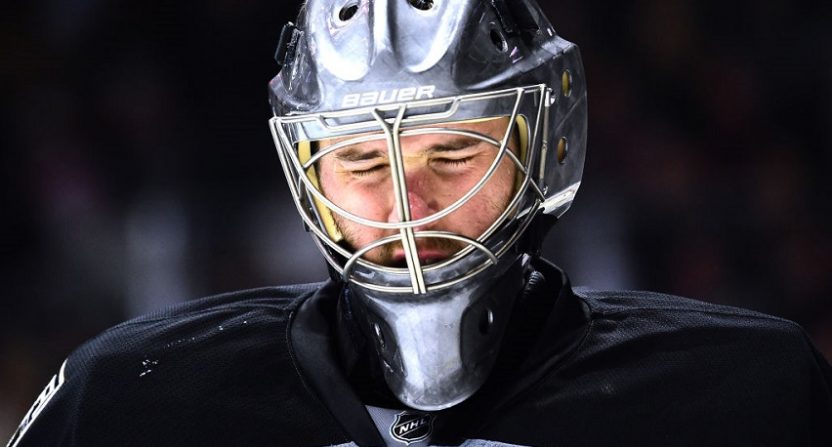 There are just about three weeks left in the NHL regular season and as is becoming tradition, the Los Angeles Kings are fighting for a playoff spot. Has acquiring Ben Bishop ruined their chances? What’s the future for that team? Why would anyone think I know anything about Harry Potter? And of course, how can I shoehorn The Nice Guys into a hockey column when no one asked about it? There’s only one way to find out! Mailbag!

@davelozo What's going on with Ben Bishop? The change of scenery has not been kind to him.

For the Los Angeles Kings, a team in desperate need of offense, trading for a second goaltender when they just got their starter back from injury was always going to be a dumb trade. Even if Bishop played well, you could always say he was simply matching the output of Peter Budaj. Considering how the Kings had the same problems in 2012 and 2014 and addressed them with trades for scorers and won Stanley Cups, Dean Lombardi feeling he needed Bishop is doubly odd.

And it’s not that Bishop has been bad. He’s made three starts — two good and one bad — and wasn’t great in relief of Jonathan Quick on Sunday. Every goaltender will have a run like that over an 82-game season but when you trade for goaltender with 20 games to play, everything he does will be amplified, good and bad.

Meanwhile, Quick has been a steady .920 goaltender since returning from his groin issue. You get why the Kings wanted to have insurance for their goaltender coming back from injury but again, they had it.

Jarome Iginla, the one scorer acquired by Lombardi, has three goals in nine games. That’s a 27-goal pace. That’s what the Kings needed, to catch lightning in a bottle with an offensive player that was having a down year. Or just a good scorer they could rent. They needed as many of those as possible.

The Kings are averaging 2.18 goals per game since acquiring Bishop and are six points out of the playoffs with 10 games to play. If they come up just short, it’s likely an extra goal or two over their final 20 games would’ve made more of a difference than anything Bishop does.

@davelozo How can the LA Kings fix this mess of a team?

When the Kings won the Cup in 2014, I thought, “This could be a real dynasty.” Now that they might miss the playoffs for the second time in three years, I think, “Was this team ever good or did it catch fire at the right time in 2012 and win a bunch of Game 7 coin flips in 2014?” I don’t know!

But look at the roster. What happened? When did Anze Kopitar turn 29? When did Quick turn 31? Jeff Carter is 32? Marian Gaborik is 35? They still have a great back end anchored by Drew Doughty, Jake Muzzin and Alec Martinez, but everything else is either falling apart and/or on a cancerous contract.

You can scream in my face all day about Kopitar being an elite two-way player, but if he’s only scoring 10 goals going that one way, he’s not worth anything close to $10 million per year no matter what he’s doing going the other way. If you say the terms of Dustin Brown’s contract three times into a mirror, Lombardi will appear in your favorite team’s front office and give your 15th best player six years and $40 million. With a little less than $14 million available in cap space next season, assuming it stays flat at $73 million, there’s no easy way to fix it.

Hang your hat on the idea that hockey is like 60 percent luck, the Kings have Kopitar and Doughty and the West is as bad as its been in a decade. Just get in as an eight seed, get hot and… you know how it goes.

@davelozo of all the potential matchups this year – what would be the worst Stanley cup final to watch- every other year?

These are the 10 worst possible Stanley Cup Final matchups.

10. Pittsburgh-San Jose (I’m not big on sequels of things that weren’t that great)
9. Chicago-N.Y. Rangers (Not looking to hear “Original Six” for two weeks)
8. Ottawa-St. Louis (The NHL would never recover from six 2-1 games)
7. Montreal-Calgary (Really, any all-Canadian final would kill me)
6. Pittsburgh-Chicago (The idea of old men at NBC orgasming upsets me)
5. Columbus-Minnesota (The winning team’s fan base would reach levels of insufferableness never before seen)
4. Pittsburgh-Edmonton (Don’t need two weeks of McDavid-Crosby comparisons and also the reason in No. 6)
3. Nashville-Montreal (I can’t relive the Subban-Weber trade. No one can.)
2. Anaheim-Washington (The only thing more boring than hearing about two superstars for two weeks is hearing about two coaches for two weeks)
1. Ottawa-Los Angeles (I know the odds are long but watching two teams trap each other for seven games would end not just the NHL but the sport terrifies me. When it ends, I’ll be like Tom Hanks after he gets freed at the end of Captain Phillips. )

Give me Washington-Edmonton, Washington-Chicago or Washington-San Jose. Good hockey and fresh storylines. And only minimal orgasming from NBC Sports executives.

The easy answer is St. Patrick’s Day, but that’s not a “major” holiday. Matt Holliday is a bigger Holiday. So I’m going to go off the list of U.S. Federal holidays to avoid ripping International Waffles And Nipples Day or Dress Your Cat As A Hobbit Day.

I don’t know. Those are all good. I’ve decided I like all the holidays.

You think your Twitter followers know you, then one asks you to compare hockey players to a movie franchise you’ve invested a total of 14 minutes in.

Which house is the most overrated after being good for a few years? That’s Weber’s house. Are any of these houses made of gingerbread? I honestly have no understanding of the Harry Potter world. Once I saw they play sports on brooms, I knew it wasn’t for me.

If Canadiens were people in The Nice Guys:

Shea Weber — Jackson Healy
Big, his size and toughness are helpful, but he’s not going to get the job done on his own.

Brendan Gallagher — Holland March
Talented, underestimated, has a lot of success despite falling a lot.

Carey Price — John Boy
Everyone talks about him being the best, but he ended up being disappointing most of the time.

Marc Bergevin — Older Guy (That’s how Keith David is listed on IMDb)
Makes just as many smart moves as dumb ones, should probably move to Michigan.

@davelozo is Premium Rush the best bicycle movie to prominently feature both a burrito and JoGo? #thatburritolife

I’m only including this to let you know it took me five minutes to figure out JoGo was Joseph Gordon-Levitt. I don’t remember anything about this movie. Nobody does.

@davelozo Who's the top "Old Guy Without a Cup" to root for this year?

It’s Joe Thornton until he retires. I’d say Iginla, but he’s probably not going to the playoffs. No one’s over-35 career makes me sadder than Iginla’s. Why did you choose Denver, man? You had the rest of your life for legal weed. Sign with the Capitals next year!