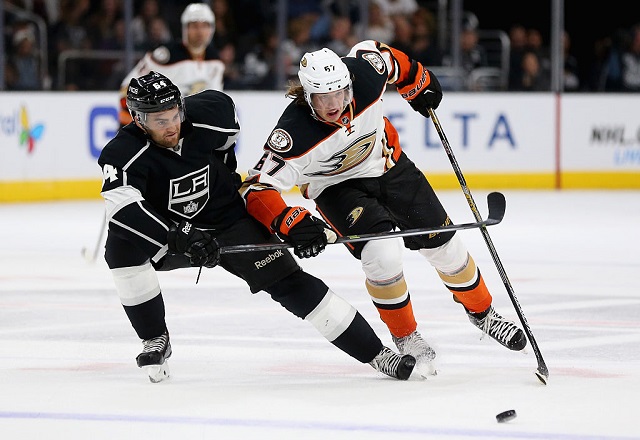 Will a player ever admit he won’t fight? What is the Batman V. Superman of NHL rivalries? Should Holtby go for Brodeur’s record at all costs? You’ve got questions, I have things that resemble answers in the latest mailbag!

1. I was wondering what you think league reaction would be like if a guy made this type of statement in the media: “I will not accept, nor instigate any bare knuckle fight during any game no matter the circumstance. I will still proudly stick up for my teammates, but only by handing out legal checks during game play. I have trained all my life to practice my hockey skills, shooting skating hitting etc. One punch to the head and my career would be over.”

I think old hockey guys would be aghast. But possibly younger players would agree too and even make the same statement.

I’m honestly surprised it hasn’t happened yet. If you make it known you won’t fight during games there will be negative backlash absolutely but it could be a step in the right direction.

Anyway just wanted your thoughts since you’re one of my favorite hockey ppl 🙂 keep up the great work.

There will be an openly gay player in the NHL before there is an openly I will never fight in any situation player. Are there guys who feel that way about fighting? You bet. But if they were ever to open the door a crack on the idea they are only 98 percent willing to defend a teammate instead of 100, they’d be a locker room outcast.

In the past week, I’ve seen Tanner Glass, a guy who needs zero bodyguards, get hit hard twice. In both situations, tiny teammates Derick Brassard and Mats Zuccarello — the latter is nominated for the Masterton Trophy after coming back from a FRACTURED SKULL in last year’s playoffs — did that thing where they come to the aid of a teammate ready to fight. Neither player dropped his gloves, but by doing that thing where players get angry about a clean hit in a contact sport, they win points among teammates.

The only way fighting goes away completely is if the league demands it. This way, players can find themselves in two groups — the ones that are genuinely mad about the loss of fighting and the players that can pretend they are genuinely mad and feign anger toward the commissioner who enacts this change.

@davelozo what is/are the missing piece(s) WPG needs to round themselves out for deep playoff/cup contention?

They need a team save percentage of .920 and another top-six forward. The Jets are a top-10 team in score-adjusted Fenwick, but they have two goaltenders that have combined for a .906 save percentage in 56 games. That’s similar to the story of the Dallas Stars, but they’ve scored 50 more goals than the Jets, so they can live with bad goaltending.

The Jets have a lot of pieces and aren’t far off. If Connor Hellebuyck, who has a .918 in 26 starts this season, takes the reins and does that over 60 games next season, the Jets have a really good shot at being a playoff team.

I’m usually an advocate for resting goaltenders. The last goaltender to win a Stanley Cup while making at least 70 regular-season starts was Martin Brodeur in 2003. You can’t burn out your goaltender before two months of grueling games and expect to win a championship.

I’m all for Braden Holtby taking a run at the record. He’s played in just 60 games and with eight games remaining, he could play them all and still finish below 70 (math lesson!). Throw in the fact that Holtby hasn’t been great during the second half and it makes a lot of sense for Washington Capitals coach Barry Trotz to throw him out there as often as possible down the stretch in the hopes of finding his game.

Holtby is only 26 years old, so playing six or seven of the Capitals’ final eight games shouldn’t do too much to fatigue him. Let him break the record and get himself righted all at once.

@davelozo How Emotionally distraught were you when McDonald's stopped making Rolo McFlurries?

I was more emotionally distraught when I tasted it, as it was the most disappointing ice cream experience of my life. It was like someone mashed up three Rolos and dumped them in a vanilla milkshake. It was a crime. Rolos are the best candy and McDonald’s tarnished their good name with an inferior product.

5. Who would you rather have going forward: Rasmus Ristolainen or Seth Jones?

Seth Jones, no doubt. Rasmus Ristolainen has better offensive numbers this season but I think they’ll come eventually for Jones. The only concern is if John Tortorella decides to start a personal vendetta against Jones like he did against Ryan Johansen but if I was picking a player with whom I’d start a team, I’d go with Jones.

6. Which NHL Rivalry is equivalent to Batman Vs. Superman?

This is a difficult question. You’re asking for an NHL rivalry that’s overblown, gets shoved down the throats of fans and isn’t really a rivalry because Superman is an alien with superpowers and Batman is a narcissistic billionaire that knows karate. We need two teams with one of those teams being obviously better and winning all the time.

That makes Anaheim (Batman) vs. Los Angeles (Superman) the answer.

It’s a “rivalry” based on location but the Kings have two Stanley Cups in four years and beat the Ducks on the way to the second Cup. When the Kings missed the playoffs last year — let’s say they were resting at the Fortress of Solitude — the Ducks still couldn’t get out of the West.

You know how Batman created a new costume (it’s a costume) to beat Superman? It’s some sort of suit of armor or garbage can that isn’t much to look at? Well, the Ducks introduced new monstrosities as their third jerseys this year, perhaps in the hope the Kings would have their corneas damaged by that much bright orange. Just like when Batman gets his ass kicked by Superman, it will at least look a little cooler when the Kings throw the Ducks through a wall.

If the Ducks beat the Kings in the playoffs this year, please ignore this mailbag.