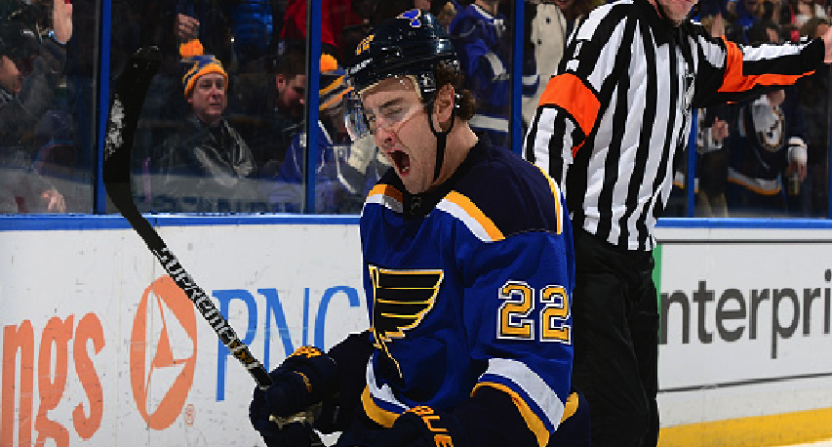 Check out this trade deadline mailbag that will self-destruct and become irrelevant about 30 minutes after you read it when Kevin Shattenkirk is traded. [Editor’s note: Yeah, about that…] This is the end of the intro because if stuff happens between the time we save this and the time it posts, this needs to be rewritten too. Trade deadline mailbag!

1. Who would the Rangers have to give up for Shattenkirk and would it be worth it?

KEVIN SHATTENKIRK WAS TRADED TO THE WASHINGTON CAPITALS LIKE 30 MINUTES AFTER I WROTE THIS!

So let’s just change this to past tense and talk about what the Rangers would have had to give up for Shattenkirk.

I’m of the opinion any realistic package would (have been) worth it. Pavel Buchnevich? Absolutely. J.T. Miller? Heck yes. Michael Grabner? I’m (would have made) the trade call before Doug Armstrong (got) the –ner out in Grabner. And a first-round pick? Indubitably. And some middling prospect? You should get the point by now, but yes.

Just to help get you excited – 10 Shattenkirk Goals! #RockTheRed pic.twitter.com/koIPLNl5Kg

I (would have been) OK with trading Miller, even if that’s not a popular opinion. It’s not that I think his breakout year is a fluke, but even if he’s a 60-point guy for the next five years, I’d rather have the top-10 defenseman for the next five years even if it’s at a much higher price. The Rangers (will never) have a better chance to fix their defense while Henrik Lundqvist is still a championship goaltender. Yeah, Shattenkirk is likely destined for the Rangers in the summer anyway, but there are two reasons they (should have gotten) him now.

One, Shattenkirk could (have been) the difference between losing in the first round and winning two rounds. He’s that valuable. If the Rangers go into the playoffs with this defense, maybe they can do some damage if they get a wild-card spot and enjoy the luxury of crossing over to the Atlantic. Adding Shattenkirk would (have given) them some hope if they have to go through Pittsburgh and Washington.

Two, adding Shattenkirk now (would have given) the Rangers a leg up on everyone else when it comes to negotiating after the season because they (would have been) the only team that (could have offered) him an eight-year contract. (They can still do this if they acquire his rights from Washington after the season). The Rangers defense is a hot garbage fire behind Ryan McDonagh and nothing should be more important to the franchise than solving their blue-line problems, and if that (involved) trading a 60-point winger when offense is not a problem, you (should have done) it.

Miller will be a due a new, more expensive contract after 2017-18, and the Rangers aren’t lacking for talented top-six wingers. They’d still have Mats Zuccarello, Chris Kreider, Buchnevich and Jimmy Vesey beyond 2018 and Rick Nash has one more year left on his contract after this season. You can grab productive wingers in free agency, like, for instance, that Grabner guy we just mentioned.

There would need to be other work to do in the summer to fit Shattenkirk under the cap, especially if they want to re-sign Mika Zibanejad and Shattenkirk gets $8 million per season. But then again, if the Rangers view Kevin Hayes as a No. 2 center, packaging Zibanejad with Dan Girardi’s cancerous contract in a trade would alleviate some of those issues, as would buying out Girardi.

Most trade deadline deals are for luxuries; Shattenkirk (was) a necessity both now and in the coming years. If it (would have come) at the expense of Miller, it (would have been) a fair price and one you (could have blamed) on Glen Sather overpaying Girardi.

@davelozo if you're Marc bergevin, who do you part with to get duchene, and why does joe take the deal?

Whatever it takes. Maybe I’m a little higher on the Canadiens than everyone else, but I feel like Matt Duchene is the difference between going to the Cup Final and maybe losing in the first round to a Metropolitan team. There’s very little separating the top teams in the NHL this season and Duchene is worth any price.

Forgetting for a second what adding a $6 million player through 2019 does to the cap when the Canadiens are pressed against it, if you can go Duchene and Alex Galchenyuk down the middle for at least the next two seasons — man. They’d need to dump salary and get creative with the cap remaining flat next season but figure it out, Marc.

Should the Montreal Canadiens go after Matt Duchene, even if it risks sending away their 2016-First-Round-Pick? @Matt9Duchene #NHL pic.twitter.com/4o5GPH0gVQ

Also, I know Habs fans are in love with Phillip Danault, but you could say I… Danault … why you wouldn’t be OK with including him in a Duchene deal? He’s a 24-year-old, 40-point guy. There’s one thing NHL fans love more than anything — cheap dudes on entry-level contracts doing anything at all. Duchene is a 65-to-70-point guy on a team that isn’t a disaster. You take that in a heartbeat.

So if it’s Danault, some other good prospect, a first-round pick and a conditional pick that can become a first, you absorb that stomach punch and wake up the next day knowing you’re going to contend this year and at least the next two before Shea Weber’s body gives out completely.

3. Nashville in the Summertime

@davelozo how much does Matt Duchene's trade price go down if teams wait until the offseason versus the deadline?

I’d say much lower. So much can change between March and June. I just spent multiple paragraphs extolling the virtues of a Duchene-Danault swap, but if Danault is a point-per-game center for three postseason rounds, you can close the door on the Habs as a trade partner in the summer.

At that point, you may as well hang on to Duchene if you’re Colorado and head to the 2018 deadline with him. The cap isn’t going up in the offseason so teams will first look to sign their RFAs, then add some UFAs, then they’ll probably decide they don’t want Duchene then anyway. The Avs will rationalize that if they’re contending in February 2018, then they’ll make a move.

Based on your avatar and handle, you want me to tell you that Nashville is a great place for Duchene. Correct! Ryan Johansen and Duchene would be a great 1-2 punch. They have close to $20 million in space for Duchene’s contract and Johansen’s new deal.

The Avs are crazy if they don’t trade Duchene now. By the time they are good again, Duchene’s deal will either be over or nearly over, so move him now while his value is at its highest and get to rebuilding.

4. Not buying on rentals

@davelozo Hot Take: Calling players "rentals" is some of the dumbest lingo in the #NHL your thought?

Right? Some people live their entire lives renting. Maybe we should use Fight Club lingo and call them single-serving players. “The Wild added a single-serving center when they acquired Martin Hanzal over the weekend.” Run this by the Internet and see if it works.

5. The Bay Door is Closed

@davelozo is there a chance of Bishop going back to TB next year?

6. So You’re Telling Me There’s a Chance

@davelozo Is there a move that would make the CBJ a legitimate Cup contender? Or do they just hope Bob stands on his head for four rounds?

Yes, if that move is to the AHL and the Cup is the Calder Cup.

7. Bruin a Cup of Boring

@davelozo will the Bruins actually make a move this season to do a viable run or will they fall asleep behind the wheel again?

Who cares? The Bruins are boring. Even their ineptitude is boring. It’s store-brand ineptitude. Give me that straight-fire Coyotes ineptitude, like not being able to get anyone to pay for an arena and the team’s Twitter scolding 40 of their 135 fans for doing the wave. That’s the good stuff.

I’m at a point with the Bruins where hearing news about their moves is akin to hearing from a guy in my office about his fantasy team. Nothing either party does has any true effect on me or the NHL, so let’s just pretend they don’t exist for a bit. Go all-in, dump pending UFAs, who cares.

@davelozo beating a dead horse here but what would be worse a 6-9th place team like the isles standing pat or going apeshit all in?

If they’re going after Duchene, it’s great for now and the future, so pay whatever it takes. This group isn’t winning shit. You need to shake it up. Renting… sorry. Acquiring a single-serving Radim Vrbata or Patrick Sharp isn’t getting the Islanders over the top. It’s a band-aid on a hatchet wound.

There aren’t too many teams with $8 million wings on the third line, so that’s hard to match. But…

Parise-Hanzal-Pominville in Minnesota is pretty good. Grabner-Hayes-Miller in New York is great. Eaves-Rakell-Perry could be good if Perry ever gets it together. That’s about it unless a team makes some deadline moves.

@davelozo do you see the Sharks doing anything at the deadline?

With less than $400,000 of room and a very good team that got to the Cup Final last year, this is probably it. Doug Wilson should do something to ensure that Micheal Haley isn’t taking a single shift in the postseason but beyond that, they’re set.

@davelozo Why does any team actually want Iginla? He's awful.

Come on, now. This is Jarome Iginla. You don’t dare say that about him. Let’s look at his numbers.

Geez. Eight goals and 18 points in 60 games. OK, fine. So maybe those numbers aren’t great, but it’s the underlying numbers that can reveal a player’s true value.

On a garbage team, the worst since the full-season lockout of 2004-05, Iginla is dead-even in on-ice shot attempts relative to his teammates. That says a lot. His shooting percentage is down five points from last year and his shot rate has fallen to just below two per game. I think those last two numbers are more about the disaster for which he’s playing as opposed to his 39-year-old body being drained of all hockey ability. He had 22 goals last year!

On the right team, he can be a factor in the playoffs. I stand with Jarome.

It will be hard to top the Kings getting Ben Bishop.

@davelozo how many GMs will do nothing & then come out & say we were close on a few trades but couldn't get the deals over line because they're bad?