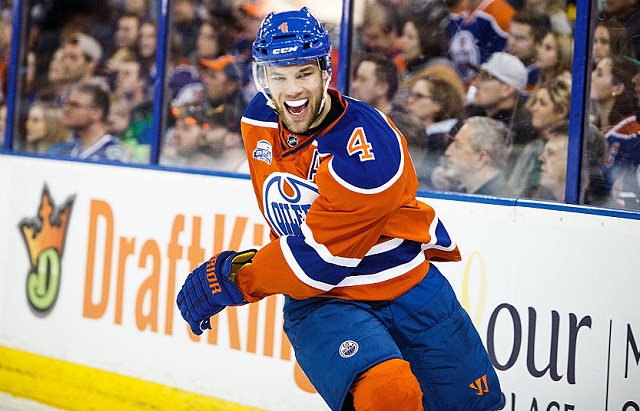 Ladies and gentlemen, we have reached the best part of the offseason! It’s when a foreign player slags another player in his native language, then retracts/adjusts/denies it right away! When Taylor Hall isn’t being thrown under a bus, we’ve got questions about the NHL’s best beat writers, intangibles and why anyone should choose to play their hockey in Buffalo. Mailbag!

@davelozo Mailbag. This mass throwing under the bus of Taylor Hall. Am I seeing it more because I'm an Oilers guy, or is it unusual?

Oscar Klefbom took a shot at Taylor Hall (in a Swedish publication, and as is hockey tradition with these sorts of things, he immediately “clarified” his statement) by saying he essentially was useless against good teams and piled up points against weaker teams. It’s an odd statement for several reasons:

Ben Scrivens on Klefbom's comment on Hall: 'He would know pretty well, he played with him for a while, and I can't say he's wrong' #Oilers

Hall had the slightest of dips in his scoring average against playoff teams last year, but that’s to be expected against better teams. If you believe that a European player was misquoted in his native language, then this is hardly an ex-teammate tossing Hall under the bus.

But if you believe Klefbom’s original statement — I do! — then you have to wonder how a 23-year-old who’s been up and down in three seasons came to this conclusion. My feeling is, like all young, impressionable people, he didn’t come up with this notion on his own. It was probably something that was said for years by veterans in Edmonton and Klefbom bought into the assessment.

Yada, yada, yada, that Klefbom statement probably speaks more to why the Oilers had to trade Hall as opposed to Hall’s actual production and ability.

In the business of sports writing, the people who break news are held in the highest regard and tend to get the national jobs. It goes for beat writers too, but as a sports fan, I could not possibly care less who was the first to report a signing. I want to be flooded with information about my favorite sports team and wouldn’t mind you making me laugh here and there.

Jeremy Rutherford, St. Louis Post-Dispatch (@jprutherford) — Whenever I’m researching something for a story and I need a question answered, Jeremy has almost always already answered it. I imagine that’s very satisfying if you’re a Blues fan. He also does chats that are filled with good info.

Michael Russo, Minneapolis Star Tribune (@russostrib) — He breaks news and usually has insider information that others do not. He also seems to empty the notebook quite often. Lots of hashtag content for Wild fans.

Mark Lazerus, Chicago Sun-Times (@marklazerus) — He writes good analytical stuff, takes on things like Patrick Kane rape allegations head-on and is a good follow on Twitter (as long as you can get past his tweeting every time he hears a Pearl Jam song).

Arthur Staple, Newsday (@stapenewsday) — He’s pretty much the only human being on the Islanders beat. Instead of being consumed by loneliness on the road and overwhelmed by dealing with a team that has seemingly been on the move for years, he still finds time to interact with fans in Twitter Q&As.

If I didn’t list you, take it as an insult and use this as motivation to get better at your job, damn it. I’m ashamed of you. God.

Here’s an impression of me watching a game in late-October.

Me: Damn it, I wanted to keep track of how many broken sticks I see during the season.

Then I go about ignoring the number of broken sticks I see and repeat this process the following season.

In related news, I wish I ran a business that was so profitable that I could automatically assume a half-million dollars in losses every year as if it were no big deal.

This would require me to know the characters of this movie beyond The Joker and Harley Quinn, and I’m sorry, that’s just not going to happen in today’s mailbag.

@davelozo Has the NHL screwed up playing conditions as bad as the NFL did for the hall of fame game?

It was at the outdoor game in Calgary between the Flames and Canadiens. It was literally cracking in one of the corners, which is probably the last place you want bad ice. The wind chill pushed the temperature to −25 degrees Celsius (−13 Fahrenheit) and I honestly can’t believe the players went through with the game.

@davelozo What was your best experience as a fan at a game?

Broncos-Giants, Oct. 24, 2005. Giants came back from down 13 points in the fourth quarter to win 24-23. It felt like Eli Manning’s coming-out party. The Giants got stomped in the playoffs that year, but that was the start of the run which led to two Super Bowls, both won by defeating the New England Patriots.

And last year’s Giants loss to Carolina was easily the most fun I’ve ever had watching the Giants lose. I’d go to that game again if I could.

@davelozo what are the odds Las Vegas picks Orpik in the expansion draft instead of, oh say, Alzer or Orlov? One WILL be available

I did an expansion draft a while back. Rosters will change between now and next summer, which means players available now may not be available then. But it seems as though there will be no shortage of useful defenseman.

Brooks Orpik is old, not good and has a cumbersome contract. There’s no reason to think Las Vegas would take it on, unless the management team is as inept as it is laden with former Capitals front-office people.

@davelozo what intangible stat would cause a hockey player have played through the broken leg injury from the olympics. thanks

There are many possibilities. I’m no analytical maven but here’s where I would look.

With your leg in pieces, adrenaline can take over and get you through that penalty kill and onto autograph signings where you ink your name on that picture of you grimacing whilst killing a meaningless penalty in November.

Don’t underestimate on how not receiving enough love from a father as a child can lead to someone seeking it out in other father figures, like a coach.

Sometimes the simplest answer is the answer.

In the world of hockey, asking to come out of a game with a broken leg can be interpreted as weakness. Fear of being branded a coward by people that are only temporary parts of your life can push you through that pain.

Is it a contract year? Are you not financially secure? You’ll play through a broken leg, mangled genitals and a missing eye if that’s how you earn income.

@davelozo How would you try to convince Vessy to stay in Buffalo?