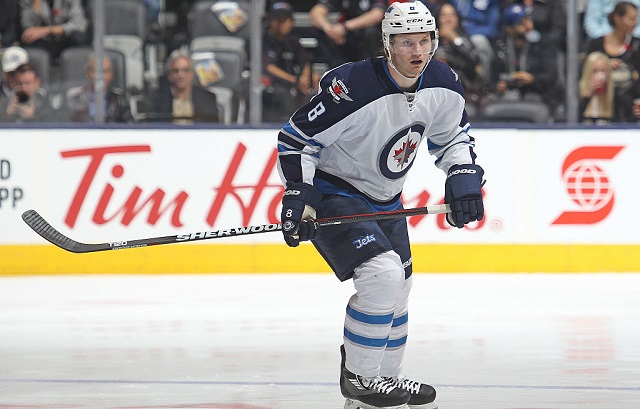 Let us gather around for a special edition of the NHL Mailbag, the Jacob Trouba: Rescue Edition. Why is he stuck in Winnipeg? Is Harambe a sandwich? Is he a salad? Is the Cincinnati Zoo a hot dog? My apologies, as I haven’t vetted the questions besides the Trouba one, so I’m just assuming those other topics are covered. Mailbag, my loves!

I have to admit that in this case, it is I who is the sucker. I thought he was going to get out. I really did. I was barely alive for the Iran hostage situation so this was my chance to see an American hero rescued from behind enemy lines. Jacob Trouba called for help. He begged for it. It never came. He joined the Winnipeg Jets. We, as a nation, let him down.

To get a young player with zero leverage out of an undesirable situation, Seal Team Six has to arrive in the form of an offer sheet. Just the threat of one got Brandon Saad out of Chicago and Dougie Hamilton out of Boston. You have to think anyone could have formulated a plan for saving Nikita Kucherov from his dictators in Tampa Bay, although he’s in a pretty great situation and likely didn’t want to go anywhere. You need both the willing partner and willing player, which is hard to find.

For whatever reason, it didn’t happen here. Trouba wanted out, he was offer-sheet eligible, and nothing. The problem for Trouba was fear of Winnipeg matching it and spending the next seven years of his life in Manitoba. Ask Shea Weber about how hard it is to get away by signing a crazy offer sheet. Throw in the fact general manager Kevin Cheveldayoff hates trading as much as Trouba hates Winnipeg and it was a doomed situation.

This doesn’t mean a trade still isn’t a possibility, although a bridge deal like the one he just signed means his next team will have to pay even more on his next contract. Remember when fellow Kurt Overhardt client Ryan Johansen went through his big holdout when he wanted a second contract that paid him fairly? He took three years and $12 million in 2014 and was traded the following season.

It’s an apples and oranges situation, but Trouba and Johansen are in the same fruit family with their situations. Maybe he gets moved by this year’s deadline, but his future is still somewhere outside of Winnipeg.

To answer the question, Trouba would have been better served having competent people negotiate the new CBA in 2013.

@davelozo what record would the Oilers need at 41 games to convince you they will make the playoffs?

Buddy, I decided this a long time ago. A week ago. Maybe 10 days. But I’ve seen enough. The Pacific Division stinks and the Oilers have enough talent to finish in the top three.

I got to watch them play against the Rangers last week and let me tell you, the Rangers are running teams out of their building to start the season. The Oilers played them pretty even for the entire game. They sorta crapped their pants a little when the Rangers tied it like 10 seconds after the Oilers went up 3-2, but they were right there the whole game. It’s easily the most impressive performance I’ve seen at MSG this season, and I’ve seen Tampa, San Jose and St. Louis get waxed real convincingly.

Yeah, it could all go to crap at any moment. But that’s just life. That’s this mailbag. But even if it goes sideways a little, the rest of the Oilers division is so bad that I don’t think it will matter.

@davelozo what was the first rule change you were ever aware of as a young hockey fan?

I distinctly remember the NHL reducing room behind the net to screw Wayne Gretzky. Seeing what he had to work with compared to what I had to work with at the park or in gym class blew me away. Here the world had two great playmakers, me and Gretzky, setting up in our offices, and he had less room to create highlight-reel goals than me. As one great player watching another, I felt bad for Wayne.

Today, I don’t get how the NHL had this once-in-a-lifetime player and said, “Let’s make the one great thing he does better than anyone that much harder for him to do.” Although now that I know the NHL much better, I totally get it.

I also remember being confused by the two-line pass, something you millennials never had to learn. I used to think the goal lines counted and I didn’t get why you could make a pass from behind your net to outside the blue line. Goal line, blue line, two-line pass, buddy! Illegal! That stopped being cute in my 20s.

@davelozo what current day show is the closest to being a modern day Friends?

Nothing. He’s going to kick the stuffing out of Derek Dorsett.

Drink whatever tastes good to you and doesn’t make you sick. Drink light beer when going for distance. When someone says, “let’s do a shot before we leave the bar and go home,” you say no every single time.

Don’t mix Red Bull with stuff because you might die or, even worse, pass out in front of a lot of people and have to go home. Clear liquor is your friend. Sugary liquors are your enemy. Order a White Russian once a while, as they are delicious.

Try everything once, even if it smells funny. Don’t keep asking your friends what beer they’re on. Drink at your own pace. The number of beers you have drank so far is as interesting as your fantasy football team. If you get in a car after more than two beers, you’re an asshole.