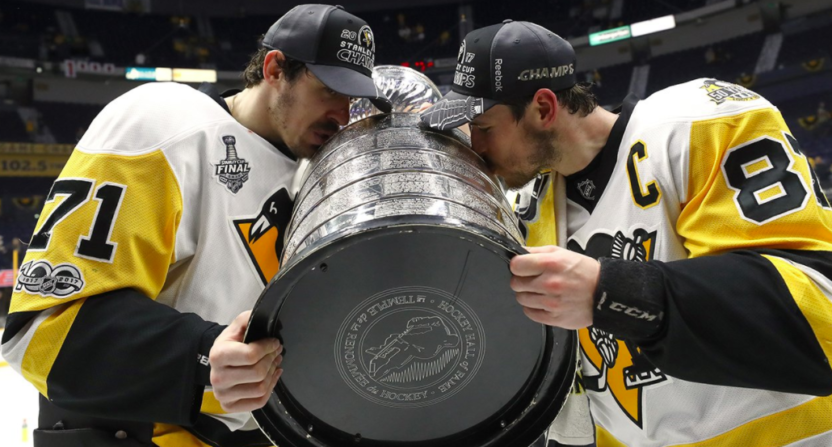 It’s been a wild two years for the major sports in North America. It seems nearly every championship game or series featured either a huge comeback or an insane finish. That is, in every league besides the NHL.

Of the six sports in question — baseball, hockey, football, basketball, college football and college basketball — only the NHL has missed out on having a “forever” moment that will live on in memory and perhaps define the game.

April 2016, NCAA Basketball National Championship:
Marcus Paige of North Carolina hits a ludicrous shot to tie the game with just a few seconds left, but is quickly upstaged by Kris Jenkins of Villanova, who hits a game-winning three-pointer at the buzzer.

June 2016, NBA Finals:
The Cleveland Cavaliers make the first 3-1 series comeback in NBA Finals history to defeat the 73-win Golden State Warriors after Draymond Green is suspended for Game 5 for his utter refusal to stop hitting dudes in their manhood.

November 2016, World Series:
The Chicago Cubs complete a 3-1 series comeback on the Cleveland Indians to win their first World Series since 1908 with a legendary Game 7 victory in extra innings.

January 2018, College Football National Championship:
Alabama comes back from a 13-point deficit to force overtime and wins on a walk-off touchdown pass thrown by freshman Tua Tagovailoa, who entered the game in place of the ineffective Jalen Hurts.

February 2018, Super Bowl LII:
Philadelphia and New England put on an offensive show as the Nick Foles-led Eagles surprise the Pats. The game ends on a failed Hail Mary attempt by Tom Brady.

That stretch also includes a Summer and Winter Olympics, which created many more incredible moments. So it’s been a good few years for the other leagues and sports! But it’s been a tough stretch for the NHL and hockey in general. The highlight of that time is certainly the USA Women’s Team winning Gold over Canada this past year.

But it’s been a while since men’s hockey has created a lasting memory or broken into the great national sports conversation for an extended period of time. You’d probably have to go back to T.J. Oshie’s shootout heroics against Russia in the 2014 Olympics to find something that really captured the average American sports fans’ interest. And that was four years ago in a preliminary round game.

The last few Stanley Cup Final series have been well-played, but not especially dramatic or memorable. The Penguins were clearly better than the Predators and Sharks, just as the Blackhawks were superior to the Lightning and the Kings were better than the Rangers in 2014. That series ended with a double-overtime goal to clinch by Alec Martinez, but it came in a Game 5 with fairly low stakes if the Kings had lost the game.

You’d have to go back to the 2013 Cup to find a truly wild and memorable series. On top of being the most evenly matched series of the decade, the teams played a triple-OT classic in Game 1 and an insane 6-5 slugfest in Game 4. Then, of course, Game 6. The Bruins were 1:16 away from forcing a Game 7 when two Blackhawks goals ended the series prematurely.

Along with the raucous 2011 Final, a memorable finish in 2010 and a tremendous series in 2009, these moments and games thrust hockey into the national spotlight, however briefly. For a while, it seemed hockey was trending back up in popularity after the lockout threatened to permanently derail things.

But that momentum seems to be gone. It’s not easy to get casual fans to care while the NBA Finals are drawing so much attention and going outside is just becoming appealing again. Even with golden boy Sydney Crosby and the Penguins looking to three-peat and Alex Ovechkin trying to win his first Cup. It’s much easier to grab eyeballs when the action is dramatic, there are impossible comebacks to root for and there are intense moments to drive water-cooler talk.

Something like the aforementioned championships of the past two years would also be nice for the hardcore fans of hockey. If you’re not a fan of one of the teams that’s gone to the Cup in the past three years, what are you going to remember about them in 20 years? What would you tell your kids about them? Did they matter to any casual observer even a few months later?

Unlike most NHL complaints, there’s nothing the league can do to improve this. We just have to hope that something worth remembering is on the way.