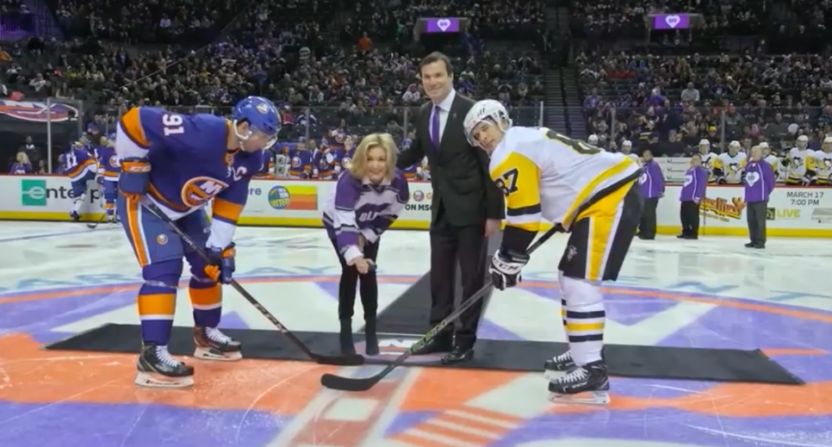 Last month, the New York Islanders held a “Do It For Daron” night to raise money and awareness for mental health initiatives. The “Do It For Daron” movement is named after Islanders’ assistant coach Luke Richardson’s daughter Daron, who took her life at 14 back in 2010.

On Friday, NHL Network premiered a new eight-minute feature about Daron and the Richardson family, narrated by Doug Weight, the Islanders’ head coach and a long-time teammate and Richardson who’s been close to the family.

That’s an impressive piece from NHL Network, featuring new interviews with Luke Richardson, his wife Stephanie and his daughter Morgan about Daron, about what she meant to them, and about their efforts to promote awareness and discussion about mental health since her passing. It also dives into the support they received from the hockey community at the time and the support they’ve received since, including around the Do It For Daron Night, and talks about how people have come together to help and support them.

Weight’s narration helps add personal meaning here, given his long friendship with the Richardsons. It’s cool to see an active head coach take the time to do that, and that helps illustrate what the DIFD efforts mean to him.

Some particularly interesting elements here are the decision to focus on what Daron was like growing up, which really helps relate her story to viewers, and the discussions of her interactions with hockey people like Islanders’ goalie coach Fred Brathwaite. It’s a good portrayal of what she was like and why her memory is so important to her family and friends, and why they feel it’s so vital to promote mental health awareness and initiatives.

The Richardsons’ comments on the importance of discussing mental health issues, the support they’ve received from the hockey community, and the value of the DIDF movement being youth-led particularly stand out, starting at 5:20:

Morgan Richardson: “I think mental illness is just something that has not been talked about and I think that there is a lot of stigma and shame with mental illness, with suicide. And it’s really important to take away that stigma and shame and be able to have those conversations. I think that’s really important and something that needs to change.”

Doug Weight: “So that brings us to DIFD, a movement in Daron’s name to spread awareness of mental health.”

Stephanie Richardson: “Do It For Daron started with Daron’s hockey teammates. They really wanted to do something, so they started with helmet stickers, and purple tape, and banners. They really wanted their season to be dedicated to their friend, and it just grew from there. …I’m in awe when I think that it started with a group of kids, and had they not have done it, things wouldn’t have changed. I’m in awe that our hockey community is fearless, for the sense to have a DIFD game when nobody was talking about mental health, and to really embrace that and put that out there for their fanbase. They had no idea how that was going to go, and it’s been well-received, and we saw the Islanders do it this year.”

Luke Richardson: “I didn’t know, but when I went out for warmup, our whole team was wearing the hats in warmup. I was blown away, I almost had to turn around and go back into the dressing room. I didn’t know if I could really watch it, I was just so overwhelmed. It was a special evening. And the team and the organization did a great job, the Barclays Center did a great job, everything was purple inside and out. …People can talk about what they need to talk about, get the help and not feel shame that there’s something wrong with them. That’s what DIFD is doing and I think hockey can create that perfect environment for it.”

Doug Weight: “I’m proud of my friend Luke Richardson and his family. I’m proud of the courage they displayed in the face of tragedy and continue to show today to try and make sure that what happened to Daron doesn’t happen to anyone else. I’m also so very proud of the hockey community and the way we rally around our own. Daron Richardson is a member of that community, and she always will be.