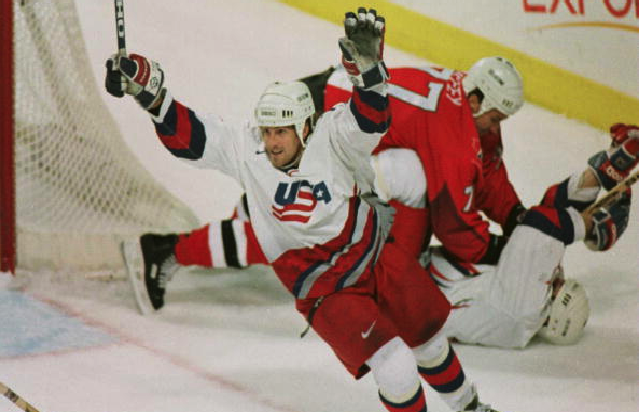 NHL Network picked a good time to step into the sports documentary space with its new “NHL Originals” series, timed to commemorate the league’s 100th season. With the World Cup of Hockey set to begin on Saturday, what better way to establish the stakes of the third such tournament and remind fans of the level of competition than to look back at the inaugural World Cup of Hockey played in 1996?

Orchestrating an Upset: The 1996 World Cup of Hockey premieres on Wednesday, Sept. 14 at 10 p.m. ET, and the one-hour documentary presents a compelling look at the rivalry between Canada and the United States in international play. What the film lacks in depth, presumably due to its one-hour running time, it makes up for with intriguing narratives and engaging personalities.

If there’s one mistake the documentary makes in its opening moments, it’s sticking to the “orchestra” thing a bit too closely. Perhaps that seemed like a natural theme if that’s how Team USA general manager Lou Lamoriello viewed putting together his roster. But comparing hockey players to musicians — to violinists, trumpet players and drummers — is an analogy that gets stretched pretty thin and is quickly abandoned.

While the “orchestra” theme may have seemed like a cute idea for the introduction, it really wasn’t necessary when the circumstances of the 1996 World Cup tournament and the developing rivalry between the U.S. and Canada was more than sufficient to establish a prologue for the rest of the story. Besides, Lamoriello isn’t even a factor in the latter part of the documentary when the narrative is focused almost entirely toward the action on the ice. And that’s where this documentary excels.

Going into 1996, there really wasn’t much of a rivalry between Team USA and Team Canada, as the Canadians traditionally dominated international play. That looked to continue as the 1996 squad was loaded with talent and iconic names, 10 of whom would eventually be inducted into the Hockey Hall of Fame. But antagonism between the U.S. and Canada was developing some heat due to what happened between the two countries in the 1991 Canada Cup.

Canada won the tournament, but the U.S. didn’t want to go away meekly. Late in the first game of the best-of-three series, Gary Suter checked Wayne Gretzky hard into the boards — a hit viewed as a “cheap shot” by many Canadians, including CBC commentator Don Cherry, because it was a check from behind — resulting in the icon missing the rest of the final (and later, the first month of the 1991-92 NHL season). But Suter’s hit set a tone for Team USA to follow four years later. Don’t revere those legends on the Canadian side.

But that moment demonstrates one of the glaring weaknesses of Orchestrating an Upset. Where are Gretzky and Suter to talk about that hit and the repercussions it had, not just for the 1991 Canada Cup, but for the rivalry between the U.S. and Canada? We get thoughts and opinions from broadcaster Doc Emrick and U.S. players Brett Hull and Mike Richter, but they were observers (some more directly involved than others).

Gretzky’s absence is also noted at the end of the documentary, when he missed a wide-open opportunity to tie the game at 2-2. The film sets up the moment well. Both U.S. and Canadian players notice that Gretzky, hockey’s greatest scorer, is left alone in front of the net. Teammate Paul Coffey finds him with a perfect cross-ice pass, but the puck hits Gretzky’s stick and deflects away before he can get off a shot. Again, we get insight from Team USA’s Doug Weight and Canada’s Theo Fleury, but where is Gretzky or Coffey to talk about the play?

Maybe those players weren’t available or perhaps not enough people lent the sort of insight that was worth using in the documentary. It could very well be that the film wanted to focus on a few key players and stay with them throughout the hour, rather than use a wider array of faces and comments.

With that one-hour running time, there simply isn’t enough space to truly dissect particular moments like that. There’s a bigger story to tell, and one certainly worth telling. The U.S. cruised to the World Cup final, while Canada had some challenges. But Team USA lost the first game of the best-of-three final in Philadelphia, meaning they had to win two straight against Team Canada in Montreal. That circumstance alone warrants a documentary.

Though Orchestrating an Upset does lack commentary and insight from several key players involved, it does benefit from those who were available. Richter, Bill Guerin, Keith Tkachuk, Tony Amonte, and coach Ron Wilson (who the film explains was a master motivator) all add valuable insight and amusing sound bites. But the standout is Brett Hull, who may have been the most compelling figure of the tournament. He was reviled by Canadian fans as a native who played for Team USA, notched key goals — notably the go-ahead score — and most intriguingly, had no idea what to do when the U.S. won the tournament because he’d never achieved that kind of victory before.

But the documentary also seems to willingly handcuff itself to stick to its narrative. Yes, the U.S. was the story, upsetting favored Team Canada in the very first World Cup of Hockey. But hearing more from the Canadian players involved — besides Gretzky, goaltender Curtis Joseph and coach Glen Sather are noticeable absences —would have significantly enriched this film. Rather than a 50-minute documentary cut for TV and commercial breaks, Orchestrating an Upset would have been much better had it been expanded to even 75 or preferably 90 minutes. The story and characters, and hockey fans, deserved more.