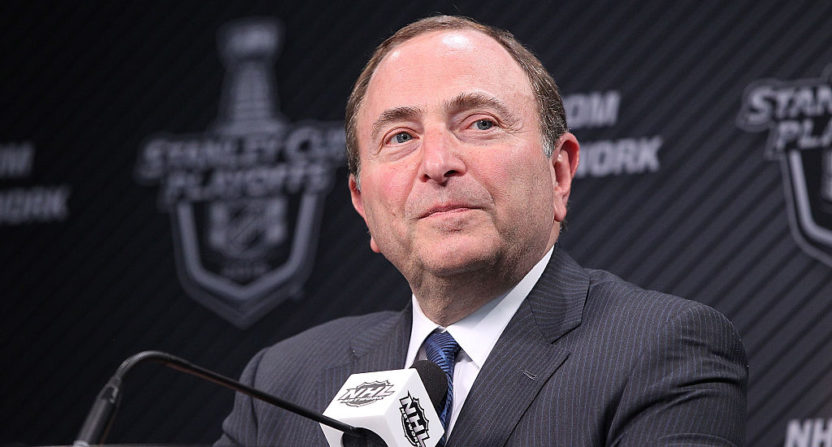 Prior to Game 1 of the Stanley Cup Final between the Pittsburgh Penguins and the Nashville Predators, NHL commissioner Gary Bettman and deputy commissioner Bill Daly spoke with the media about a variety of topics concerning the league. The interviews went great if you hate ads on jerseys, mediocre if you’re hoping to see the league try something new with their playoff system and horrible if you’re hoping to see formal participation in the 2018 Winter Olympics in South Korea.

To summarize, there won’t be ads on the new Adidas jerseys (yet) and the league is sticking with their current playoff system.

When the topic of the 2018 Olympics came up, here was Bettman’s response:

Gary Bettman on if 2018 Olympics are still an open issue: "It is not and has not been."

Bettman once again says NHL players will not be going to the 2018 Olympics. He said it is definitive. That's it.

If that doesn’t put the matter to bed once and for all, Bettman added that no players under contract are expected to leave to participate in the tournament.

Bettman on Ovechkin saying he'll leave for OLY. “We have an expectation that none of our players are going," won't get into consequences

Ovechkin previously made it known that he planned to participate regardless of what the league decided.

While Bettman and Daly didn’t comment on what would happen to a player who left to go play in the Olympics, it’s safe to say they’ll be able to find some sort of punishment to use on players (if any) who try to participate.

Though Bettman indicated talks and discussions have ceased on the idea of participating in the 2018 Olympics, apparently they did bring up the idea of the NHL competing in the Summer Olympics. The International Olympic Committee wasn’t on board.

Bill Daly on the possibility of hockey being part of Summer Olympics: "We have talked to (the IOC) about it. It wasn't a warm reception."

So, why did the NHL decide to keep their players home instead of showcasing them on one of the game’s largest stages? The answer is enough to make you want to pull your hair out.

Bettman says the NHL is not anti-Olympics, it is anti-disruption to the season.

That’s a pretty rich response from the league which has had three (!) lockouts since 1994. One of those lockouts (2004-05) killed the entire season while the other two (1994-95 and 2012-13) cut the season down to 48 games. One would think that a league which is skipping the Olympics to avoid a disruption would work a bit harder to avoid regular work stoppages due to failed negotiations on collective bargaining agreements.

It’s also ironic that the league’s decision to sit out will likely rub players the wrong way, leading to even more distance the two sides need to make up in future bargaining agreement negotiations.

Perhaps most ironic of all is the NHL’s desire to grow the game abroad … while sitting out from the Olympics.

Bettman said he can't predict what will happen regarding 2022 Beijing Olympics but NHL is committed to growing game in China.

The league is committed to growing the game in China among other areas, but won’t allow its players to compete on a global stage. Totally logical.

Meanwhile, has anyone within the NHL asked if the focus should really be on growing the game abroad? What about focusing on things a bit more locally where several teams could use quite a bit of help.

The NHL's insistence on "growing the game" in other countries is odd only because it hasn't figured out how to grow the game here.

Despite expanding into Vegas, the NHL still has several worrisome franchises they need to address. The sport of hockey isn’t exactly thriving in the United States and though expansion might help, the league should really focus on walking before they try to run. If only there was a major sporting event coming up that most of the country follows that they could participate in …