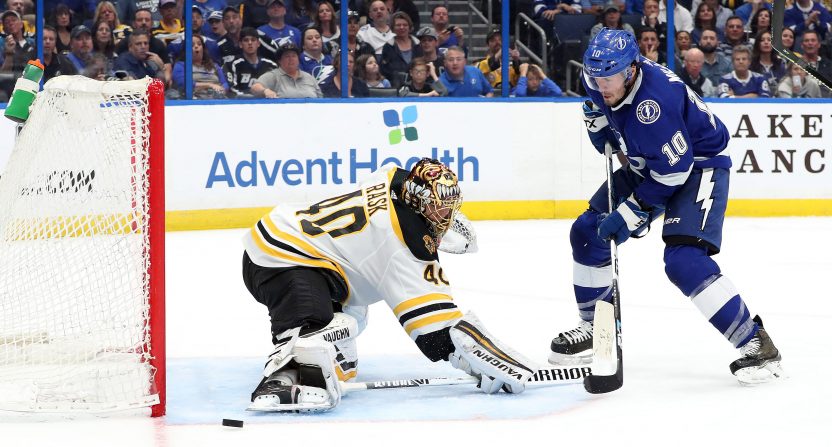 Most hockey fans would agree that the NHL is in a pretty good spot. Scoring is up, parity can be found around the league and there aren’t too many glaring rule issues. However, the current playoff format is one that’s widely despised. That feeling is shared by fans, players and even front office staff who feel the current system is outdated.

Why would the NHL want to use a system that pushes some of its best teams out relatively early?

Deputy Commissioner Bill Daly told SI.com back in 2018 that it’s all about creating and fueling rivalries, while also forcing more intense early-round matchups.

While that’s a fair idea in theory, it leads to a lot of frustration.

Elliotte Friedman reported that more and more players are growing upset by the current format, and that the topic will surely come up during the future discussions about the next collective bargaining agreement (CBA).

“More than ever, players are letting it be known to the NHLPA that they are unhappy with the playoff format. I was a little skeptical because it is CBA time, and no one easily gives up anything during negotiations. However, the complaints are legit. It is unlikely that things will be changed for next year, but the players have to sign off on anything longer than that and have asked for more proof that the current setup works as intended.”

Friedman goes on to state that NBC wanted more certainty with the second-round matchups, resulting in the current playoff format. That’s why you might find the top overall team and the second-best team playing against one another in the second round.

Why not adopt a traditional bracket system where #1 plays #8, #2 plays #7 and so on, as seen during March Madness? Or, why not go back to the format where teams were reseeded following the first round?

Boston Bruins president Cam Neely raised a few ideas, as seen in the Boston Herald. He acknowledges that the league’s effort to drive rivalries might be working, but it shouldn’t be the top priority.

“I certainly understand the reason behind it to try and drive those rivalries and it probably has helped a little bit.

But I think first and foremost you should really look at the teams that have battled hard all year to get a good seeding. I think there are a lot of people that would like to see (seeded) one through eight.”

Meanwhile, some players have created their own playoff formats. Veteran defensemen Keith Yandle had a more interactive idea that would allow teams to select their playoff opponent.

Per Friedman, Yandle’s idea is just so crazy that it might be a lot of fun.

“What I would like to see is the No. 1 team pick its playoff opponent.

The way the game is going, all the [advanced statistics], you could pick the team you match up best with. Better travel, everything.”

Yandle admitted that it might be tough to get teams to agree to this kind of format, but it’s certainly a creative solution to the current problem. Who wouldn’t want to watch some form of selection show where teams choose their own destiny? Imagining a scenario where a top seed picks a rival, assuming it’ll be an easy win, only to get stomped would be pure entertainment. Those opening round playoff matches would take on an extremely personal feel.

While opposition against the current playoff format appears to be growing, it’s a sentiment that has been around for a while. Wayne Simmonds voiced some concerns to SI back in 2018.

“I don’t necessarily agree with how it is, but it’s the way it is. You have to have a mindset that you’re going to play teams in your division first and foremost and that’s just the way it is.”

This isn’t an issue that’s going to fade away. If complaints by players to the NHLPA are rising, the topic will have to be discussed during the next round of collective bargaining agreement negotiations. Those negotiations should be picking up in a hurry as both the league and the NHLPA have the option to opt out of the current agreement in September 2019.

Like most things in hockey and the sporting world as a whole, there aren’t any easy answers or solutions. Look for this conversation to grow throughout the playoffs and into the next phase of CBA negotiations. The NHL may be achieving its goals with this format, but is it coming at the cost of player and fan satisfaction?