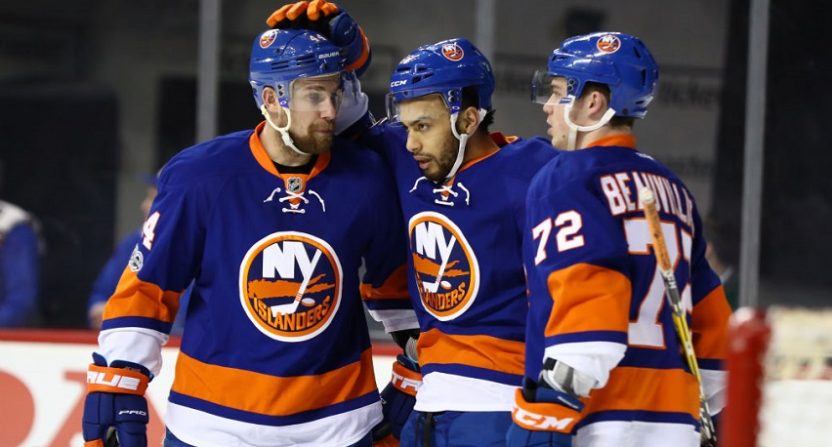 Welcome back to This Week in NHL Stupid, where we track the ugly, the silly, and the just plain stupid in the world of hockey.

When we say “the world of hockey,” we really mean it. Women’s hockey isn’t the NHL. We’ll get to that soon enough. But two of the stupidest things in the world of hockey were exposed this week, thanks to the U.S. Women’s National Team standing up for itself against USA Hockey and North Dakota treating its women’s hockey program terribly.

Team USA Will Answer The Bell …

The United States’ Women’s National Team was threatening a boycott of the World Championships over the lack of a fair wage. The women were getting support to the tune of $6,000 every four years. It was a preposterous lack of support for a group that doesn’t have near the opportunity to play professionally as their male counterparts do.

That this came to within hours of a boycott of the World Championships by one of the few teams that can legitimately compete for medals at every event is stupid enough. Thankfully, USA Hockey blinked first and signed the women’s national team to a new deal and averted disaster.

… But North Dakota Will Not

Disaster couldn’t be avoided by the North Dakota women’s hockey program, however. They, along with the men’s and women’s swimming and diving programs were cut to save $1.3 million. You might be more familiar with the men’s hockey program as they have had more team success. While the Women Fighting Hawks haven’t gone too far in the NCAA Tournament, they have sent many alumnus to the Olympics (eight in 2014) and World Championships. But when it comes to the almighty dollar, no program is safe. Not even in a hockey hotbed such as North Dakota.

Jocelyne and Monique Lamoreux, perhaps the most famous of North Dakota hockey ladies, were not pleased with the news, or the way it was disseminated:

@UNDsports shame on you for not having the decency to communicate with the staff and athletes before anyone else!

Glad to see @UNDsports leaks publicly they are cutting a team before informing the players and staff. #classymove

Everything, and I mean everything, is for the money. It’s part of what makes me upset about the whole NHL/Olympics dance. Nobody is interested in growing the game anymore. It’s all about “what can you do for me.”

Should North Dakota be concerned with growing the sport of hockey? Probably not. But if hockey, especially women’s hockey, can’t make it in a hockey crazy area, then what message are you sending about its chances to survive? It ties into the Team USA flap. Maybe women’s hockey would have had more of a chance if more resources were spent at the national level to help it grow. Instead, USA Hockey got lazy because why pour money into a program that was guaranteed to finish silver at the very worst every four years? It didn’t have to be this way.

Maybe the Islanders Can Sign Some Of Those Fighting Hawks

Okay, let’s talk about the New York Islanders, with every game mattering so much for them in pursuit of the one playoff spot still up for grabs. How could the Isles go out and give up five goals in the first period to the Flyers? Yes, they got a lot of bad breaks that period. But they didn’t help themselves at all, painting themselves into a corner to start as the Flyers first goal was on a 2-on-1.

Now, here’s some stupid which led to the fourth goal: 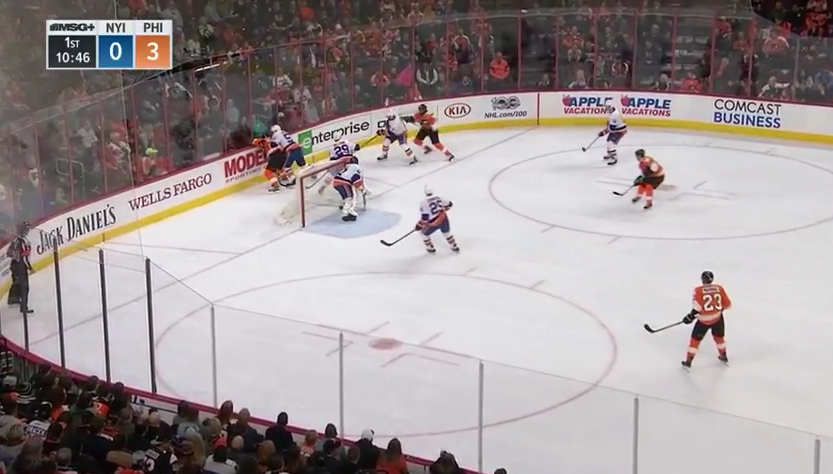 Three players behind their own goal retrieving the puck. Why Brock Nelson drifted behind the net is anybody’s guess.  Jason Chimera and Andrew Ladd slide towards the boards assuming that their teammates are going to win the puck battle with the extra player. But then… 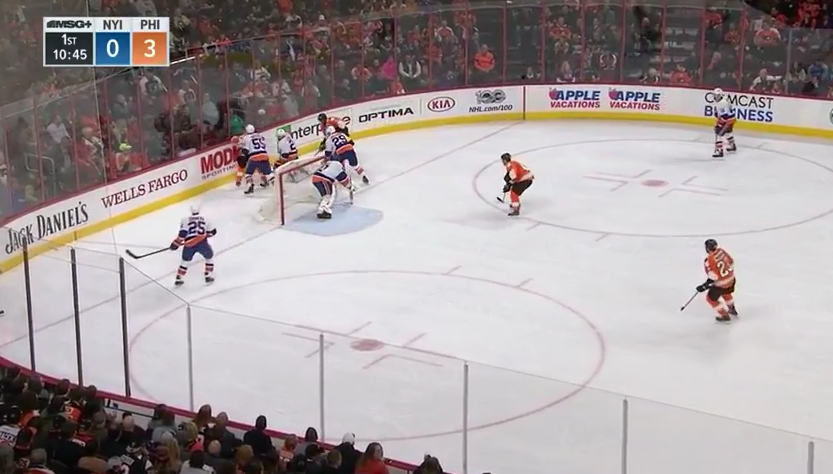 Why, there’s Jordan Weal all alone in front of the net having a steak dinner. With caramelized onions and extra horseradish sauce. Which is foodie for “he had enough time for a shot… and a rebound.” I’m not sure what’s worse, the way the Islanders left Weal wide open or the fact that they couldn’t win a battle for a puck with one extra player underneath the goal line. All this in a game they absolutely had to have. Five goals in the first period is an absolute disgrace.

The Islanders had an uphill battle to begin with. Even if they had won this game, they would have still been four back with six to go and a game in hand. Now they’re six back of Boston with a game in hand, and not only is their goose is cooked, but Jordan Weal is eating it uninterrupted in front of Jaroslav Halak.