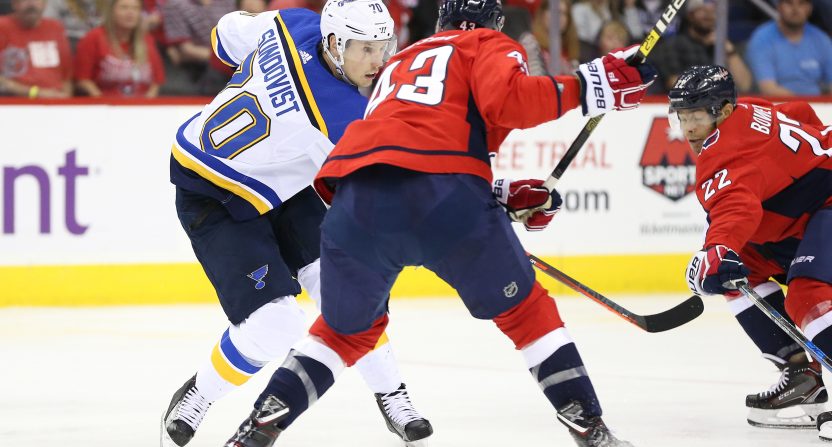 The NHL’s Department of Player Safety has suspended Washington Capitals forward Tom Wilson for 20 games after a hit to the head to Oskar Sundqvist of the St. Louis Blues. Wilson’s suspension will cost the forward over $1.2 million in salary.

Wilson will likely appeal the decision that would keep him out of action until November 21st when the Capitals host the Chicago Blackhawks.

Barring an appeal, which I'm almost certain will happen and he serves full 20-game suspension, Wilson will forfeit $1,260,162.60 in salary and make a nice, hefty donation to the Players' Emergency Assistance Fund. #stlblues

Did the NHL make the right call with this suspension?

For the first time in recent memory, we can say that they hit this one right on the head. Typically the NHL takes the easy way out. Here, you have a repeat offender once again proving that he hasn’t learned his lesson.

In fact, he holds the special record of being the player who has been suspended the most in a 105-game period.

It’s Tom Wilson 4th suspension in his last 105 games. Since the creation of @NHLPlayerSafety department, he’s the first player to be suspended that many times in such short span.

With the 2018-19 season about to begin, this was a bold yet accurate punishment. The NHL is often criticized for taking the easy way out with its suspensions, avoiding throwing the book at repeat offenders who need to be made an example of.

Capitals fans will try to argue that Wilson didn’t make enough contact with Sundqvist’s head, but the photos of the damage sustained by Sundqvist suggest otherwise.

Now that the league has thrown the book at Wilson, will they be able to maintain this precedent moving forward? The inconsistency of calls both on the ice and in terms of player fines and suspensions have created an unknown area that the league has operated in for years. As a result, hits to the head and other dangerous checks remain fairly prevalent.

2 thoughts on “NHL suspends Tom Wilson for 20 games, finally gets a suspension right”