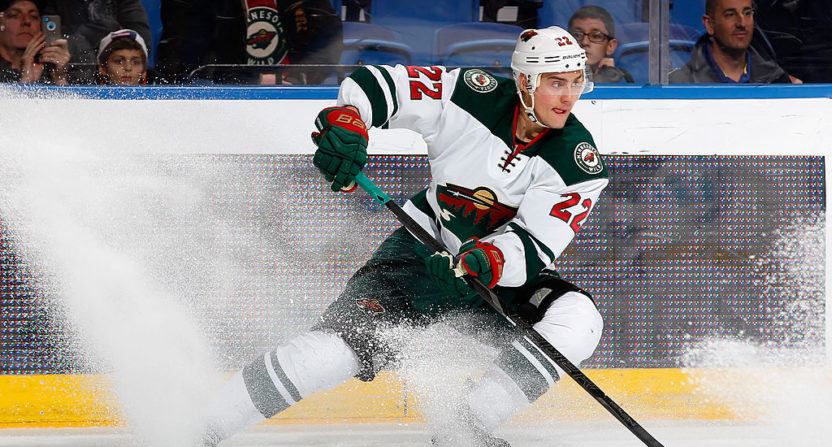 With the NHL Expansion Draft looming ahead in June, trade rumors are starting to swirl around the league as teams are forced to make some difficult decisions ahead of the 2017-18 season. One of the most interesting names to pop up is Nino Niederreiter of the Minnesota Wild who may be on the trading block despite a career year.

As always, take the reports for what they are – reports. Nothing is confirmed or set in stone, but the trade talk around the league is still a lot of fun to follow.

That being said, Sportsnet discusses that teams believe that Niederreiter might be on the block due to Minnesota’s complicated salary cap situation.

“The 24-year-old winger had a career-high 25 goals in 2016–17, and, after making a few calls, it sounds like teams are looking at the Wild’s expansion/cap situation, wondering if he could be available. Two years away from unrestricted free agency, Niederreiter is arbitration eligible and will get a nice raise from the $2.7 million he just earned.”

In summary, the Wild may not have the long-term space for the price Niederreiter can command which may force them into a situation they may not want to be in.

That led one individual from an opposing team to speculate they could make a trade.

As an exec from another team put it, “It may not be their first choice, but if you make it worth their while, it’s possible.”

When asked about the situation, Wild GM Chuck Fletcher danced around the question by neither confirming or denying the rumor.

“We are actively listening… on everything.”

That’s a great non-answer. As the saying goes, no one is untouchable in the NHL if the right trade offer is extended. With Niederreiter, there’s no doubt that he is a talented forward who can make a real difference for the Wild. He could also make a real difference for any number of teams who could package something together which would help alleviate Minnesota’s rocky cap situation.