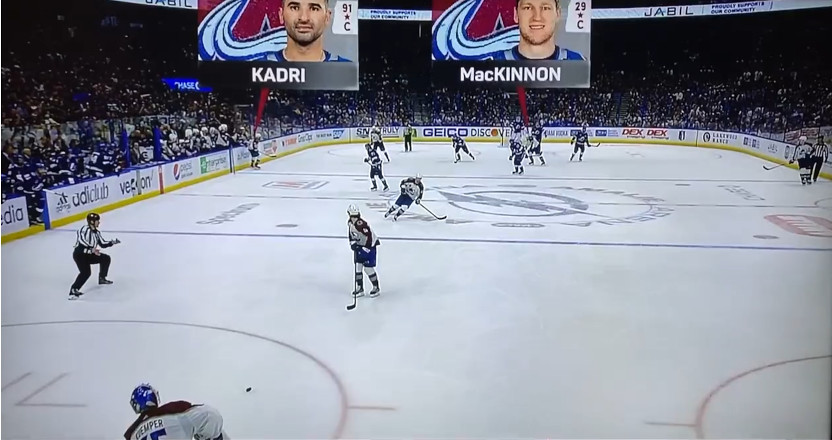 Game 4 of the Stanley Cup Final Wednesday night saw Nazem Kadri of the Colorado Avalanche score at 12:02 of the first overtime period, giving Colorado a 3-2 victory and a 3-1 series lead. However, that goal was controversial; Lightning head coach Jon Cooper only answered a single question after the game, saying “You’re going to see what I mean when you see the winning goal. My heart breaks for the players because we probably should still be playing.”

Cooper didn’t spell out exactly what he found wrong with the Avalanche goal. However, much of the online discussion quickly centered on allegations of Colorado committing a too-many-men violation that wasn’t called. And that discussion took off further when the NHL’s game sheet recorded six Avalanche skaters on the ice for the winning goal, then was edited to five. Here’s the goal, a first screengrab, and the game sheet:

The Avs win Game 4 in OT to take a 3-1 series lead! #StanleyCupFinal pic.twitter.com/8m5C1LhS84

I thought Cooper was overreacting when I saw this quote but looking at the tape, he's right. Five Avs here, Byram in the d-zone, Colorado in control of the puck. Too many men for a solid few seconds. Legitimate gripe https://t.co/FFbffkTd2T pic.twitter.com/cNlAyor2c8

🎶One of these things is not like the other …🎶

On left, the score sheet handed to media at Game 4. On the right, what's on NHL dot com. pic.twitter.com/MrtClTLtIi

However, while the game sheet boosted this conversation dramatically, it’s not really the proof some have claimed. The key there is that this (autogenerated) sheet is referencing the wrong extra player. Further videos show that the extra man debate is about the time between Kadri coming onto the ice and Nathan MacKinnon leaving the ice. MacKinnon is number 29, and he’s not listed as on ice on that goal. The extra player there is defenseman Erik Johnson, number six, who wasn’t on the ice. ESPN’s Wyshynski explored that:

Fueling the conspiracy theories: The NHL handed out a scoresheet to the media that had six skaters listed for the Avalanche on Kadri’s game winner and then edited that scoresheet to list five skaters online.

The NHL said that additional player, defenseman Erik Johnson, might have ended up on the initial scoresheet due to players jumping off the bench in celebration after Kadri scored.

The more notable discussion is about the timing of the MacKinnon for Kadri change. And the videos sure seems to suggest that MacKinnon was much further away than the allowable five feet when Kadri came on.

This is the most damming footage I’ve seen yet.

As Nazem Kadri (the winning goal scorer) gets on the ice it takes MacKinnon over 5 seconds to get back to the bench and he’s clearly much further than 5 feet away. pic.twitter.com/9ede4C6ZCU

Here’s the video from @SportsCenter pic.twitter.com/rqwMmIJcZD

Here are two screengrabs of that last video from the camera behind the Avalanche net, one showing MacKinnon’s distance to the bench when Kadri came on and one showing where MacKinnon (in yellow) and Kadri (in blue) were in the last shot of MacKinnon from that angle (the former is also the top image of this post). Artturi Lehkonen (#62) has the puck, and passes it to Kadri shortly after that second frame.

74.1 Too Many Men on the Ice – Players may be changed at any time during the play from the players’ bench provided that the player or players leaving the ice shall be within five feet (5′) of his players’ bench and out of the play before the change is made. Refer also to Rule 71 – Premature Substitution. At the discretion of the on-ice officials, should a substituting player come onto the ice before his teammate is within the five foot (5’) limit of the players’ bench (and therefore clearly causing his team to have too many players on the ice), then a bench minor penalty may be assessed.

When a player is retiring from the ice surface and is within the five foot (5’) limit of his players’ bench, and his substitute is on the ice, then the retiring player shall be considered off the ice for the purpose of Rule 70 – Leaving Bench. If in the course of making a substitution, either the player entering the game or the player retiring plays the puck or who checks or makes any physical contact with an opposing player while both players involved in the substitution are on the ice, then the infraction of “too many men on the ice” will be called. If in the course of a substitution either the player(s) entering the play or the player(s) retiring is struck by the puck accidentally, the play will not be stopped and no penalty will be called.

During the play, the player retiring from the ice must do so at the players’ bench and not through any other exit leading from the rink. This is not a legal player change and therefore when a violation occurs, a bench minor penalty shall be imposed.

A player coming onto the ice as a substitute player is considered on the ice once both of his skates are on the ice. If he plays the puck or interferes with an opponent while still on the players’ bench, he shall be penalized under Rule 56 – Interference.

The cross references to rules 70 and 71 don’t particularly apply here, as rule 70 is primarily concerned with leaving the bench to start a fight (but also has notes on players entering from the penalty box and more) and rule 71 is only about goaltender-for-skater substitutions. There are two particularly notable distinct elements of this language. The first paragraph provides all circumstances where too many men can be called “at the discretion of the on-ice officials.” The second paragraph provides when it “will be called,” which is in the case of one of those players playing the puck or making contact with an opponent. The videos show that too many men could have been called here under that first discretionary  part, but they don’t prove the second “will be called” part; MacKinnon is no longer in the frame by the time Kadri gets the puck.

The Lightning certainly have an argument that the Avalanche gained an unfair advantage from this play. While MacKinnon doesn’t interact with the play any further once Kadri comes on, Kadri’s entry while MacKinnon was still a long way from the bench meant that Kadri was in position to receive a pass near the middle of the ice by the time MacKinnon got off the ice, setting him up to swoop in on goal and score. But there is a judgment element to this call, and it’s not a reviewable call. Here’s what Wyshynski wrote on the league response:

It is somewhat understandable why this is a judgment call. If that first paragraph was that a penalty “will be assessed” in all situations where the retiring player was more than five feet from the bench when his replacement came on, the game would frequently be interrupted by too many men penalties in situations where there wasn’t really an advantage gained. And, on that note, some screengrabs seem to illustrate that the Lightning may also have had too many men on the ice:

As a couple people pointed out, if Cooper wants too many men here it's going to be difficult to argue with 7 Lightning players having feet on the ice https://t.co/MfwTr7nuzN

The other potential argument here is that the play should have been blown dead even before this from Avalanche defenseman Bowen Byram touching the puck with a high stick. But it’s not conclusive from the video if he makes contact with the puck:

Seeing that Cooper could have been complaining about Avs d-man Byram touching the puck with a high-stick right before the goal, not the too many men. Does he contact the puck? Tough to tell.

If so, play should have been blown dead. pic.twitter.com/fc6RK5hazB

There are limits to what officials can observe, though, especially in a fast-paced game. And the particular way this change went may have confused the issue; there were two Avalanche players closer to the bench than MacKinnon when Kadri came on, and if either of them had been the one exiting, this might have been less controversial. So the league may want to look at making this reviewable going forward. And there are ways this could be done while retaining the judgment call aspect of it, perhaps by letting the on-ice officials look at a replay and then make up their minds, similar to the video assistant referee setup in soccer.

At any rate, the Lightning certainly have an argument that this play deserved penalty consideration. And too many men calls do happen during even tense playoff situations: one in 1979 played a role in Don Cherry’s eventual transition from coach to pundit. But there doesn’t appear to be clear proof here that escalates this from may call to must-call. This does look like it will join the ranks of hotly-debated goals in the Stanley Cup Final, though, including Brett Hull’s foot-in-the-crease goal in 1999. And we’ll see if it winds up determining the series, or if the Lightning can somehow pull off a comeback down 3-1.