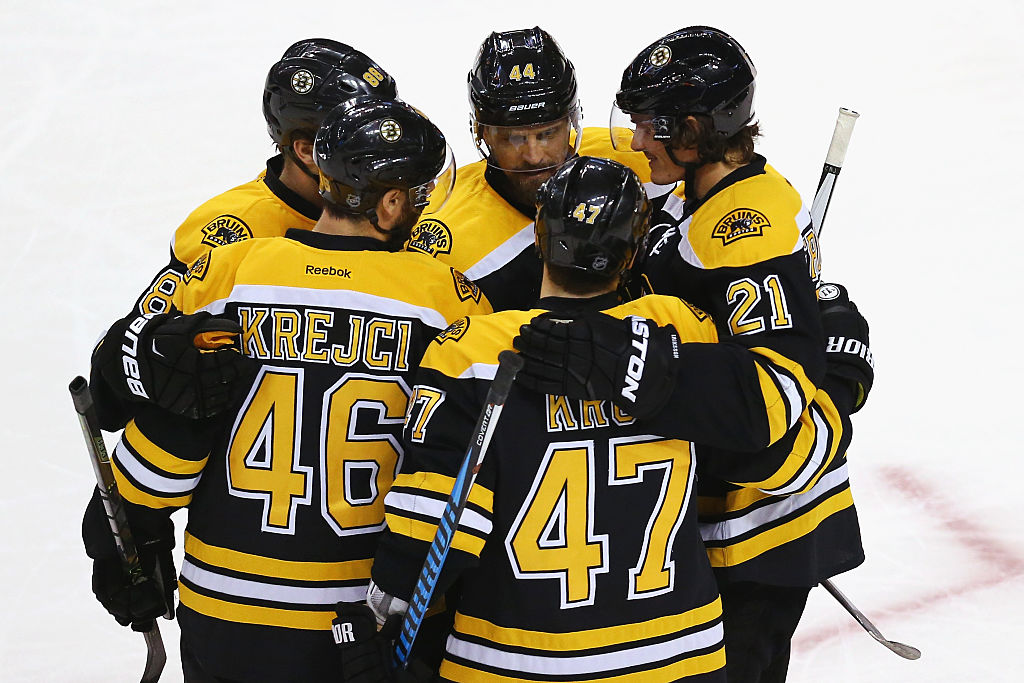 The NHL trade deadline is 3 p.m. ET on Monday but the fun and excitement is already permeating the hockey world.

Mike Weber is in Washington; Roman Polak and Nick Spaling went to San Jose; Markus Granlund has a new home in Vancouver; Shawn Matthias has packed his bags for…

…OK, so maybe the trade deadline has been as exciting as an episode of Canadian Parliament so far. Teams adding depth is like eating your vegetables; it’s a necessary part of the process but nobody likes it.

But there’s still time! There’s a pretty good distinction between buyers and sellers along with the potential for that one big trade none of us are expecting. Maybe PK Subban will be dealt to the Dallas Stars or maybe this sentence is only here so it can appear in search engines. Who can say?

Here are six sellers and five buyers (the Capitals are probably done buying, so you only get five) that you can expect to make some sort of move to either bolster their championship hopes or help a future incarnation of the team avoid being sellers again.

What’s available: Any player on the roster, maybe a couple front-office guys, possibly a trainer or two.

What they need: Draft picks, any asset under the age of 23, expiring contracts, a license for operating a tank of this size in a heavily populated city.

What’s the deal: The Leafs have already traded their captain, Dion Phaneuf, plus Matt Frattin, Matthias, Polak and Spaling, but they’ll move anyone for the right price. While most players dread seeing their GM’s phone number on the caller ID, it’s fair to say most Leafs wouldn’t mind being paroled to a playoff contender in the coming days. It’s probably a lot like sitting in the electric chair and getting a call from the governor.

What’s available: Andrew Ladd, maybe a goaltender, definitely an impending sense of dread the Jets aren’t as good as we thought they were.

What they need: Cap space, a first-round draft pick, hope, someone to take Ondrej Pavelec off their hands.

What’s the deal: The Jets have Pavelec signed for one more year and two good, young goaltenders in Connor Hellebuyck and Michael Hutchison, so one of them could and should be exchanged for anything that can help the rest of the roster. Ladd has to go and may be the best rental available.

What’s available: Mikkel Boedker, Martin Hanzal, Nicklas Grossmann, a lingering question about why 39-year-old Shane Doan has no interest in being traded to a contender.

What they need: A top-six forward and a losing streak over the final six weeks that allows them to win the draft lottery and land Arizona product Auston Matthews with the first pick.

What’s the deal: It’s possible only one of Boedker and Hanzal are dealt. The Coyotes are only six points out of a playoff spot but they’d be wise to avoid deluding themselves into thinking they should make a postseason push. Sell whatever’s not nailed down.

What they need: You know those movies where someone gets a blood transfusion and becomes a different person? That, only for a moribund franchise that needs to start over.

What’s the deal: As the Oilers conclude Year 9 of their rebuild, they will make some changes to their core either now or after the season. Nothing they do should shock anyone, unless that thing they do is make the playoffs next season.

What’s available: Kris Russell, Jiri Hudler, David Jones, a lecture about grit from Brian Burke if you have the time.

What they need: Defensemen and an NHL-level goaltender.

What’s the deal: After the flukiest season in sports history in 2014-15, the Flames are one good losing streak away from being in dead-last. Russell is not a good defenseman so anything they can get for him is a steal. Hudler, who is having a down season, could quietly be the best acquisition of the deadline.

What they need: Stuff? Young guys? Picks? Does anyone truly know?

What’s the deal: If they can’t get Eriksson signed, they have to trade him. Or do they? They are a playoff team but may not be if they trade him. What a weird team.

What’s available: They have extra picks in the fourth and fifth rounds of this year’s draft, Bryan Bickell and his $4 million cap hit that runs through next season and maybe Teuvo Teravainen.

What’s the deal: They basically used four defensemen — Duncan Keith, Brent Seabrook, Niklas Hjalmarsson and Johnny Oduya — to win a Cup last year, and now they don’t have Oduya. If they don’t want to pay a hefty price for Dan Hamhuis of the Canucks, maybe they use one of those extra picks for veteran depth on the blue line.

What they need: A defenseman, a top-six forward, a time machine that allows them to go back to 2014 and draft anyone but Drouin.

What’s the deal: Tampa is pressed against the cap so trading Drouin for immediate help won’t be easy. They will very likely take the best possible offer, regardless of position, and rid themselves of the headache.

What’s available: A defensive prospect like Jamie Oleksiak or maybe Valeri Nichushkin or perhaps Cody Eakin? It’s hard to say because the Stars are in no rush and will be a contender for years to come.

What they need: A legitimate No. 1 NHL goaltender.

What’s the deal: Antti Niemi (.907) and Kari Lehtonen (.907) are going to be the end of the Stars but they can’t fix that at the deadline. So if they bolster the defense, will it really matter? The Stars are an existential dilemma. What’s the point of getting better if the goaltending is going to kill them eventually?

What’s available: This is a weird team. It’s pretty much the same group that has been disappointing in the playoffs for years and they don’t have a plethora of prospects or picks to deal. Kevin Shattenkirk’s name has been in rumors forever. David Backes has been a playoff bust forever and his contract is about to expire. But how does trading either of them make the team better?

What they need: Scoring forwards.

What’s the deal: If the Blues lose in the first round again, this is probably it for coach Ken Hitchcock and some of the core. Offense is always an issue for this team in the playoffs, but is one scorer going to make them a Cup contender? Doubtful. They need to do something, though.

What they need: Seriously, why are you ignoring me? Are they buyers or sellers?

What’s the deal: Since Don Sweeney became GM last summer, the Bruins have been trying to exist as both a rebuilding team and a contending team. They could very easily trade Loui Eriksson but get something back that helps them now. Or maybe they go for it. Or maybe they tear it down some more. If the Bruins don’t know what they are doing, there’s no way we can know.