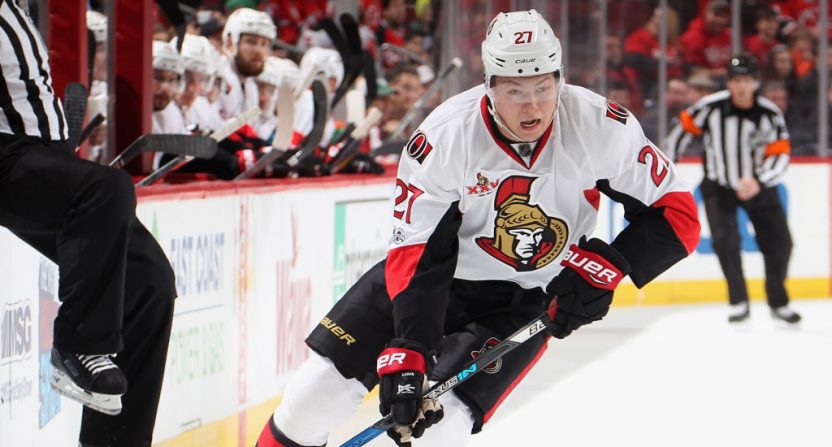 Another NHL trade deadline has come and gone, and with it, immediate judgments can be made about who succeeded and failed. Here are the winners and losers of the last 24 hours of trades in the NHL.

Parenteau is one of those guys who’s long been effective, but hasn’t been given the credit he deserves. With 13+ goals in four of the past five seasons, the 33-year old is as reliable as a third-liner can be. Adding a scorer on a 20+ goal pace for a sixth-round pick isn’t the sexiest move, but for a team hoping for a lengthy playoff run, adding scoring depth doesn’t hurt – especially at such a low cost.

Frankly, it was laughable when reports suggested Senators GM Pierre Dorion wanted a first-round pick for Lazar. The former first-round pick has scored six times in his last 109 games and has registered a single assist in 33 games in 2016-17. Getting an actual asset for a wasted one is a great deal for Ottawa. Lazar needed a change of scenery. Calgary dealt an asset to get a guy who is still just 21. Perhaps Lazar will turn it around in Calgary. But with that being said, it’s a steep price to pay for someone who’s done nothing but disappoint at the NHL level.

The McKenna/Wilcox swap was largely inconsequential. However, dealing Filppula was a huge move for GM Steve Yzerman. Pressed hard up against the cap, the Lightning needed to shed salary. Trading Filppula and the $5 million he’s owed next season for Streit, a pending UFA, helps long term. Jonathan Drouin, Tyler Johnson, and Ondrej Palat are all RFA’s this summer, and the move adds flexibility the Lightning didn’t have.

Meanwhile, TBL served as the middleman in a Pennsylvania swap, sending Streit to Pittsburgh.

Plus, they added the fourth-round pick they lost, meaning they traded Filppula and his salary for a conditional seventh-round pick.

Tampa Bay gets a fourth-round pick in 2018 for Streit

Jim Benning did good work. I know, I’m shocked too.

I’m not including the Alex Burrows trade (which Benning hit a home run on). However, getting a legit prospect in Goldobin AND a fourth-round pick for Hansen is straight larceny. Selected in 27th overall in 2014, Goldobin has produced at a near point per game pace in the AHL. The 21-year-old is close to the NHL and adds another promising prospect (weird to write) to Vancouver’s pool.

Hansen’s a serviceable third-line winger, but was tremendously overvalued by the Sharks.

Everyone expected the Avalanche to be big players on deadline day. Ultimately, general manager Joe Sakic couldn’t find an adequate deal for stars Gabriel Landeskog or Matt Duchene, and he’s going to need to play the trade market this offseason. I don’t hate that idea, but Colorado was pegged as an ‘almost everything must go’ seller. Instead, they dealt some depth and Jarome Iginla (which you can read about here),

I actually like the Andrighetto deal, but it doesn’t move the needle enough. Colorado needs to find its identity and which players are going to be a part of it going forward.

Marc Bergevin did an impressive job in building hockey’s worst fourth line. With an emphasis on size, the Canadiens needlessly acquired Ott (one of the worst regular NHLers), Martinsen (also terrible), and King (average fourth-liner). Bergevin didn’t break the bank to get any of those players, but the mere fact he gave up any assets for them is puzzling.

Adding a relatively young Davidson for Desharnais (a declining center) was a solid under-the-radar move. As was trading for Jordie Benn a couple days ago. But, wasting assets on fringe NHLers instead of bringing in legit talent up front was a mistake.

The biggest deal of the day was what? Lazar? Vanek? Both Sportsnet and TSN ran full-force, wall-to-wall trade deadline coverage and were rewarded with a very mediocre day. Kudos to both networks for trying their best to squeeze as much excitement possible out of a slow, slow news cycle.