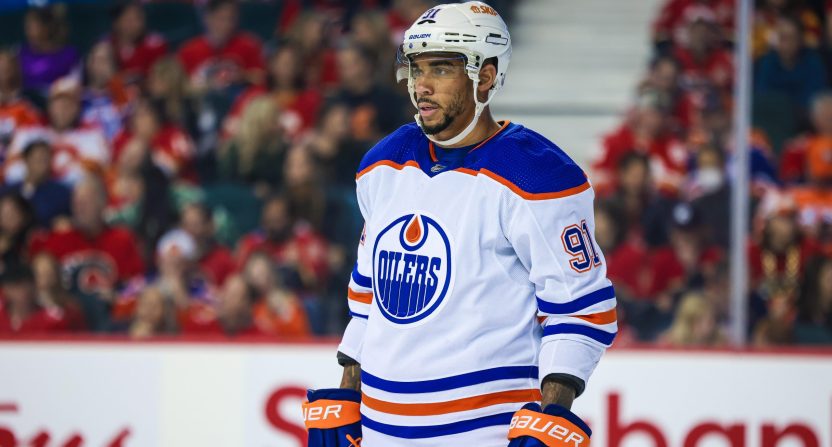 Edmonton Oilers left winger Evander Kane suffered a gruesome injury Tuesday night that left him bleeding on the ice and ended with him having surgery.

Kane fell to the ice after contact with Tampa Bay Lightning defenseman Tyler Myers in the second period. As Kane tried to get to his feet, Tampa Bay forward Pat Maroon accidentally slashed his wrist with a skate blade.

scary moment in tampa bay as evander kane has had his wrist accidentally cut on the ice. paramedics and team staff immediately down the tunnel with him. pic.twitter.com/ONKgkyHF82

Kane began bleeding on the ice. He immediately dropped his stick, grabbed his wrist and skated for the bench, where medical staff met him.

There were apparently some tense moments as Kane received treatment, with Sportsnet reporting that when Kane went behind closed doors, staff could be heard yelling, “Help! Help! Help!”

The Oilers quickly issued an update on Twitter, saying that Kane is “stable and has been transported to hospital for a procedure later this evening.”

After suffering a wrist injury early in the second period, Evander Kane is stable and has been transported to hospital for a procedure later this evening.

“This is so scary to watch,” tweeted one fan. “Evander Kane is one of the toughest players in the league. Seeing lots of disgusting comments about his well-being. I hope he recovers quickly and thank God it didn’t cut him in a direction that would’ve been life threatening.”

The Evander Kane injury should really bring to light an issue in the NHL. Arenas like Winnipeg where the away team doesn't have immediate access to locker rooms and medical from the bench must change.

If that injury happens there, it could be a much different outcome.

Concern is for damage to an artery, vein, tendon and/or even nerve for Kane

With that much blood you presume an artery was involved and if so, will need relatively urgent repair

Mikheyev had similar injury in 2019 with artery and tendons cut and was out 3+ months https://t.co/7w6wgVVpBC

Glad to hear Evander Kane will be ok. Depending on severity of Kane’s injury and length of time he misses, Oilers likely to call up multiple players. Wouldn’t be surprised to see Klim Kostin one of them.

Oh man, I hope he is okay. You never want to see something like that happen!!

That was scary man, happy he’ll be okay and praying for a speedy recovery.

Never fun to see this kind of on ice injury. Hope for a full recovery Mr. Kane; we’re all here for ya hoping for@the best.

The 31-year-old Kane has played for five teams in 14 NHL seasons. He has scored five goals and eight assists in 14 games this season.