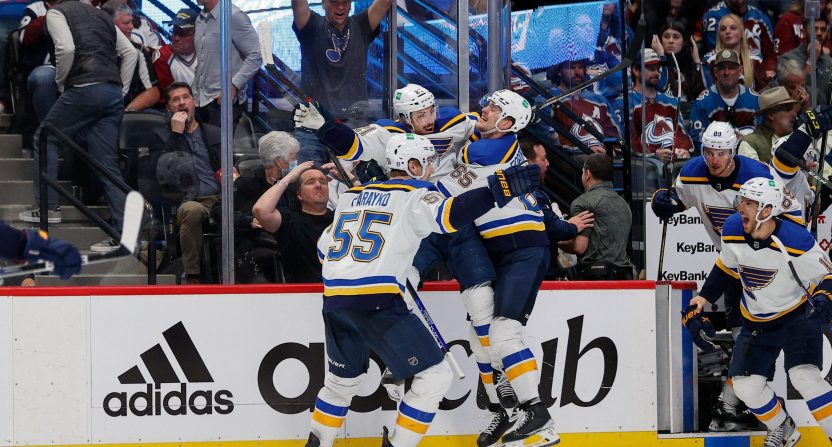 The St. Louis Blues are still alive in the 2022 Stanley Cup Playoffs, even though things looked quite bleak on that front for most of Wednesday night’s game against the Colorado Avalanche.

St. Louis trailed 3-0 in the second period, and even trailed 4-3 entering the final minute of regulation, but amazingly came away with a 5-4 road victory in overtime of Game 5.

After blowing the 3-0 lead, the Avalanche still appeared to be in great shape when Nathan MacKinnon finished off a hat trick on an absolutely incredible goal with 2:46 remaining in the third period:

Nathan MacKinnon with a RIDICULOUS goal to cap off the hat trick! 🏒🎩 pic.twitter.com/8fnro345dh

But the Blues answered with a Robert Thomas goal to tie it with 56 seconds remaining in regulation:

THEY TIE IT AND WE'RE GOING TO OT 😱pic.twitter.com/PdKNvHGzku

And 3:38 into overtime, the Blues scored the game-winner on a blast from Tyler Bozak:

The Blues stay alive with a late comeback and OT win vs the Avs! 🏒 pic.twitter.com/6jF9GSOGJu

So, the Blues incredibly stay alive in the second-round series, which now heads to St. Louis for Game 6 on Friday.

Here’s a look at how the hockey world is reacting to the Blues’ comeback and Avs’ collapse in Game 5:

Robert Thomas forced OT with a goal at 19:04 of the 3rd period, the latest game-tying goal while facing elimination in Blues history. pic.twitter.com/70DjCqDOgx

From the NHL: The Blues are the first team to score two game-tying goals in the final five minutes of regulation when facing elimination. The only other team to do so in any playoff game: Buffalo in Game 1 of the 2006 Conference Semifinals at Ottawa.

The Blues have players with Stanley Cup rings who have responded to moments of adversity throughout their careers. Which is why, I guess, they didn't curl up into little balls on the ice and start openly weeping like I would have after seeing that MacKinnon goal in the 3rd.

That one has to get in your head just a little bit if you're the Avs. Or a lot.

The St. Louis Blues are like that annoying ex that you blocked on every platform, yet they STILL somehow find a way to come back around 😂

The Blues after going down 3-0 AND 4-3 in an elimination game:#WeAllBleedBlue | #StanleyCup pic.twitter.com/Iel8rN39X2