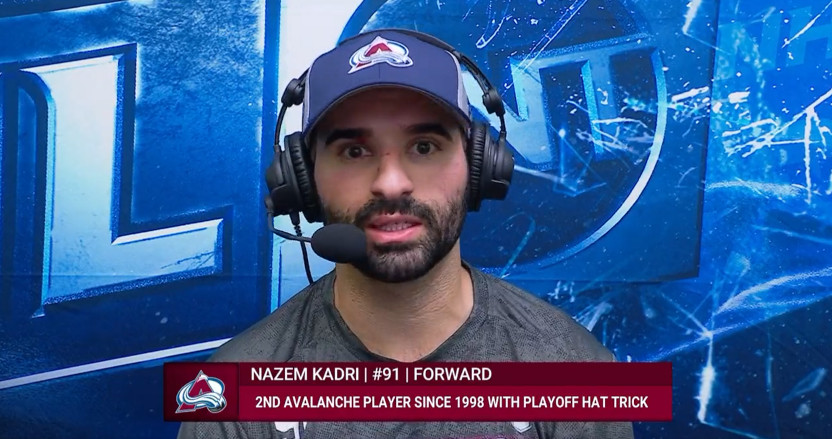 The Colorado Avalanche–St. Louis Blues second-round NHL Stanley Cup Playoffs series has seen a lot of controversy so far, and much of it has been centered on Avalanche center Nazem Kadri. In Colorado’s 5-2 victory in Game 3 Saturday, Kadri collided with St. Louis defenseman Calle Rosen and then goaltender Jordan Binnington. Binnington left the game with a lower-body injury and was later ruled out for the playoffs.

After that game, a water bottle was thrown at Kadri during his post-game interview on TNT. That also led to a lot of threats towards Kadri on social media, many of them racist, and the Avalanche and the NHL began working with St. Louis law enforcement around those threats. Kadri played in Game 4 Monday, scoring three goals in Colorado’s 6-3 win (and narrowly dodging an elbow from the Blues’ David Perron while he celebrated the second), but the discussion around the threats he’s received has continued to percolate.

The discussion particularly took off Tuesday when Kadri’s wife Ashley Cave shared screenshots of some of the abuse their family has taken through an Instagram story on their account for their cat. Mike Stephens of The Hockey News then shared that on Twitter (further details of the messages to Kadri and Cave can be seen by expanding the image in Stephens’ tweet, but that comes with a significant language warning):

Nazem Kadri’s wife shares what their family has endured for the past 48 hours through the Jazzy Kadri Instagram account.

These racist attacks are sickening. pic.twitter.com/pLWeEs0K7y

But, in the wake of those messages being shared on Twitter, many hockey media members and fans have chimed in to denounce those attacks.

Worth reading every last word of these screenshots, just to gain a glimpse of an understanding of what it's like to be a person of colour in a social media age. https://t.co/srUb6vSkXX

Awful. What is wrong with people. https://t.co/EculECFBFf

Absolutely sickening. On behalf of the city that I love, this is shameful and embarrassing. And doesn’t represent the majority of St. Louis at all. Kadri has earned disdain from the fans but hate like this is beyond unacceptable. https://t.co/V0ohaZwyw3

Imagine having this much hate in your heart. What the hell kind of way to live is that?

Shouldn’t be hard for police and the Blues and the league to identify the losers who spew bullshit like this. Awful yet unsurprising. https://t.co/Ee2CP2IbwT

Pathetic, disgusting, and absolutely deranged. If a SPORT has you acting this sort of way, check yourself. https://t.co/5DRxjwzlXc

Holy hell man what has the world come to? https://t.co/4a5zfOZu3E

Anyone holding a leadership role in hockey better WAKE UP, if we aren’t ACTIVELY fighting this toxic culture then we are ALLOWING it. These are not the “fans” we want, this is an absolute embarrassment to our sport. https://t.co/WRpSVHGSTf

Reading these is not fun, at all.

The National Council of Canadian Muslims also weighed in:

The anti-Arab racism, Islamophobia, and death threats levelled against Colorado Avalanche forward Nazem Kadri by some fans of the St. Louis Blues is completely unacceptable.https://t.co/4aUic9m2fq https://t.co/7SLBtDsTTE

But something that’s also drawing a lot of attention here is how the Blues, and head coach Craig Berube in particular, refused to publicly condemn the attacks ahead of Game 4 even after the revelation the NHL and law enforcement were investigating them, and how Blues’ players like Perron then took shots at Kadri during that game.

Just to be clear once again, Head Coach Craig Berube's response to fans of his own team sending these messages en masse to an opposing player was "no comment." https://t.co/r8e19s60f2

The silence from the Blues is all the more deafening. https://t.co/iu8D7j20gM

But Kadri himself had thoughtful comments on this in a post-game interview on TNT Monday (starting around 0:37):

Nazem Kadri was an absolute star on the ice last night. He was even better during our @NHL_On_TNT postgame chat. Give this a watch pic.twitter.com/ACNwOPYemd

“Unfortunately, I’ve been dealing with that for a long time. It’s sad to say, but it’s just the fact of the matter. I’m just putting it in the rear-view mirror. It’s a big deal, but I try to act like it’s not and just keep moving forward. That’s what I do. And I know that, some of the messages I got, doesn’t reflect every single fan in St. Louis, but for those that hate, that was for them.”

We’ll see if the Blues speak out against these attacks in the wake of this criticism, and in the wake of the publishing of some of these specific messages. And we’ll see what happens in Game 5 Wednesday. The Avalanche lead the series 3-1.