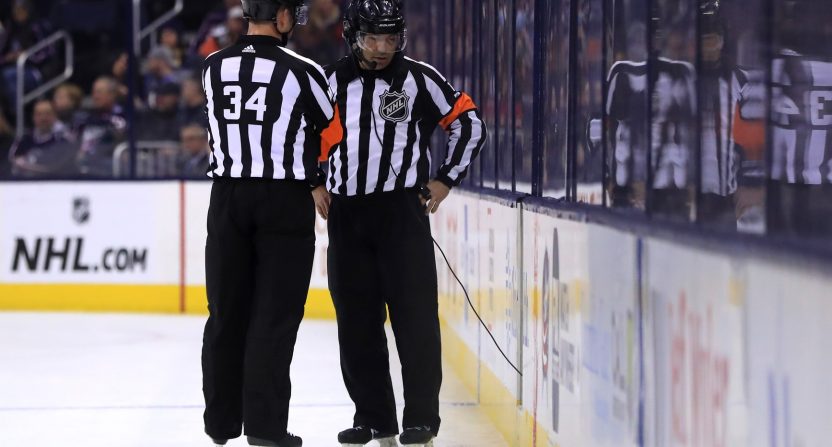 The 2019 NHL playoffs will be remembered as the year the St. Louis Blues finally achieved greatness, the year the Tampa Bay Lightning suffered a brutal collapse, and the year that the flaws of the league’s review system became very apparent.

As the missed calls and examples of the limitations of the review system piled up, just about everyone demanded better. There had to be a way to figure this out, right? Thankfully, the NHL has taken that criticism to heart and has moved forward to immediately offer some solutions.

The first major change is a significant alteration to the format of the coach’s challenge. In addition to being able to challenge offside calls and goaltender interference, they’ll be able to challenge missed stoppages in play that resulted in a goal. Examples include the infamous hand pass in the offensive zone, a puck hitting off the netting, or a puck that’s knocked down by a high stick.

The other major change of note is the ability for officials to review their calls on major, match, and double minor penalties.

Here’s the explanation, courtesy of NHL.com:

“For major and match penalties, the referee who made the call will be required to review it using the monitor or tablet at the scorer’s table. He will have the discretion to either confirm his call or reduce it to a minor penalty. He will not be able to rescind the penalty call altogether.

For double-minor high-sticking penalties, the referee making the call will have the discretion to review it at the scorer’s table. If upon review it shows that the offending stick was not from the player being penalized, the referee will be able to rescind the call.”

In other words, the major penalty that altered the San Jose-Vegas series could have been reviewed and reduced to a minor penalty with the new changes.

The NHL also announced a few other rule changes that will go into effect in 2019-20. None of these other changes are too drastic and won’t impact games as much as the previously mentioned challenge and review alterations.

Has the NHL done enough to curb some of the craziness we all witnessed in the 2019 playoffs? Mostly, but there might be some additional room for improvement.

The league needed to handle this situation urgently, yet delicately. They had to make some significant changes for 2019-20 in order to restore some faith with the players and franchises who saw some egregious errors that directly altered the outcomes of several games. At the same time, they had to avoid over-correcting to maintain the thrilling pace of play that makes hockey so great.

These new changes address a lot of the issues seen in the 2019 playoffs, but there continues to be a decent amount of gray area lingering over everything. For example, the NHL doesn’t want each individual penalty call or missed penalty call to be reviewable. That’s fairly understandable, but it means that the missed tripping call that led to a key St. Louis goal against Boston in Game 5 might still happen in the future.

It’s also impossible to ignore the NHL’s continued stance that they have the best officials in any sport. That’s seemingly overlooking the problem that the officials, while being tasked with an incredibly difficult job, miss some calls that shouldn’t be missed by four people who have a responsibility of following the play. The increased speed of the game is usually chalked up as the interfering factor, but shouldn’t that mean improved training or positioning for the officials? As important as it is to give the officials better and more enhanced tools to perform their job, the overall quality of officiating could stand to improve.

Hockey fans, players, and teams shouldn’t be too picky when the league has moved rather quickly to try to address the recent string of problems. There are still an abundance of issues with the league’s officiating and review procedures (there has to be a way to solve the whole “player not involved in the play was offside by a hair a minute before the goal” conundrum), but it’s nice to see quick action that should go a long way in putting the game in a better place.