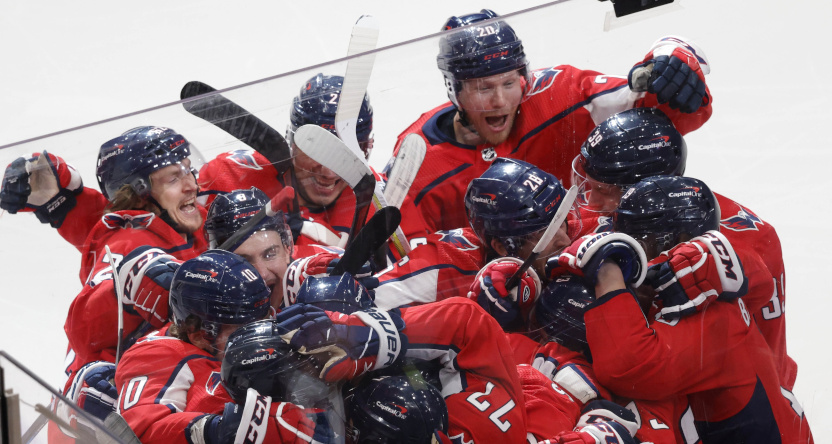 The 2021 Stanley Cup playoffs got off to a bit of an unusual start this week with only a single game on the first day, featuring the Boston Bruins and Washington Capitals.  (Technically, there was another NHL game Saturday, but that was the Vancouver Canucks and Edmonton Oilers playing out the regular-season string following the Canucks’ reschedulings after much of their team contracted COVID-19; Bruins-Capitals was the only playoff game.) That meant there was a whole lot of focus on the Capitals and Bruins, second and third in the East Division respectively, and the first game between them turned into a great battle, with Washington finally prevailing late in the first overtime on a goal from Nic Dowd. Here’s that goal, new NBC scorebug and all:

That’s a great one-time slap shot from near the point from T.J. Oshie, and a nice screen and tip in front from Nic Dowd, who directed it through the legs of Bruins’ goalie Tukka Rask. And that wound up being a good ending to the night for the Capitals, who wound up having to turn to 39-year-old backup goalie Craig Anderson (who only played in four games all season, only starting two) after starter Vitek Vanacek left following a first-period injury. Anderson, who wasn’t the team’s normal backup this season (that would be Ilya Samsonov, out due to COVID-19 protocols), made 21 saves on 22 shots and got the win:

A few days before his 40th birthday and following a season where he made just two starts, Craig Anderson picks up his first playoff victory since May 23, 2017.

So what the Washington goaltending situation is going forward will be interesting to watch, especially as this  And that’s not the only storyline here; the second assist on Dowd’s goal came from Capitals’ forward Tom Wilson, who also scored Washington’s first goal. Wilson has been the subject of a whole lot of national focus ahead of the playoffs after his May 3 punch and bodyslam against the New York Rangers.

Those actions from Wilson led to the Capitals deleting a tweet they posted about him, to the Rangers issuing a remarkably unusual statement calling for the job of NHL VP George Parros after Wilson wasn’t suspended (their president and GM both later distanced themselves from that statement, and both were fired the next day; how much of a role that statement played has been debated, but the timing was certainly interesting), and to the next game between the teams starting with a bunch of brawls. It also led to the Rangers getting fined $250,000. Wilson didn’t do anything particularly controversial Saturday, but he scored one of the three Washington goals (the second came from Brenden Dillon) and assisted on Dowd’s game-winner, so there’s going to be yet more talk about him going forward.

And there are still even more storylines around this series. Washington defenseman Zdeno Chára, 44, is playing against the team he spent the last 15 seasons with. Capitals’ captain Alex Ovechkin, 35, missed seven of their last nine regular-season games with injury, and there are questions about his health. The Bruins’ top line of Brad Marchand, Patrice Bergeron and David Pastrnak posted 69, 48 and 48 points this season, and accounted for nine goals for and three against in 64 minutes against Washington this season, so it will be interesting to see what the Capitals do to try and contain them. Meanwhile, there are also questions around Samsonov and Evgeny Kuznetzov still being in COVID-19 protocols, and what their return might look like. Add in the close finish to Game 1, and there’s a lot of potential intrigue going forward.