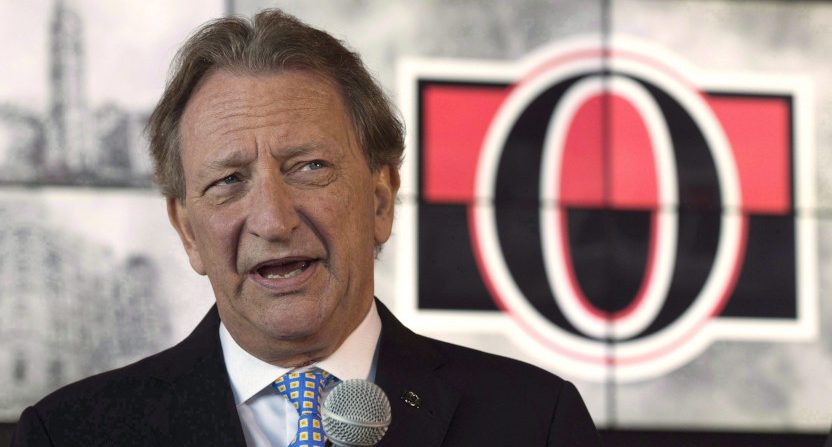 The Ottawa Senators have had an embarrassing selection of own goals over the years, including contrived Twitter accounts, a lawsuit against owner Eugene Melnyk over gambling debts, and players bashing their coach in a video recorded in an Uber in Arizona. And on Tuesday, they did that again, with Melnyk sending out a tweet (and then deleting it) about how he planned to have up to 6,000 fans in the seats at home games this year, and doing so during a provincial press conference about increased stay-at-home restrictions. Here’s that initial tweet, from Bruce Arthur of The Toronto Star:

Here’s more on that backtracking from the CBC:

In a statement released on his website later Tuesday afternoon, Melnyk said the Senators are committed to developing a plan to help fans attend games in person, “but only when the time is right.”

“That time is not now,” the statement reads. “Given the ongoing increase in daily COVID-19 cases … we understand as an organization that we must do our part to control this virus before we can entertain plans to bring fans back into our arena.”

“I think most people would agree cramming 6,000 people in one confined space is not a good idea at this time,” Watson said during a news conference Tuesday.

It’s understandable why Melnyk and other NHL owners want to do all they can to get fans in the stands this season. NHL commissioner Gary Bettman made some bold claims on that front Monday, suggesting that game revenue (direct and indirect) amounts to up to 50 percent of the league’s regular revenue, and that the league might lose billions of dollars by playing this season without fans in most markets instead of just sitting the year out. The revenue specifics there have been strongly disputed, especially in terms of how the owners will recoup those “losses” from players over time, by players’ side sources like Allan Walsh, but, yes, clearly having fans at games is better for the owners than playing in empty buildings. However, Melnyk chose a terrible time to throw out this tweet, and that proved to be just the latest embarrassing moment for the Senators.

[Bruce Arthur on Twitter; Melnyk photo via The Globe and Mail]