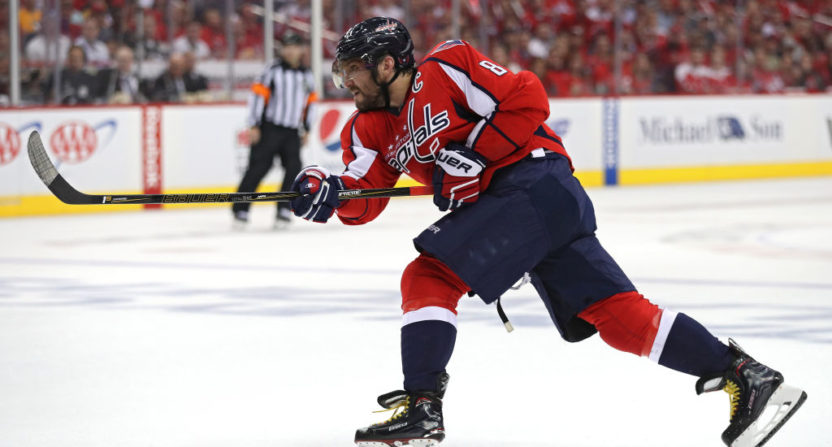 Prior to the NHL formally deciding to skip the 2018 Olympics in Pyeongchang, South Korea, Alex Ovechkin stated that he would still leave to compete regardless of the league’s decision. Ever since the NHL announced that they will in fact sit out of the 2018 Games, fans have wondered whether or not Ovechkin will follow through with his original comments.

According to a new statement from Ovechkin posted to NHL.com, it appears the star forward is admitting defeat and is shifting his focus, postponing his dream until 2022.

In his lengthy statement, Ovechkin commented that it sucks he and other NHL stars won’t have a chance to fulfill their dream of competing for gold now that countries won’t be allowed to ask NHL players to compete.

“I see the news this week and I am very disappointed that IOC, IIHF and NHL put me and all NHL players in this position when some of the best players in world do not have chance to play in the Olympic Games. This is not just about me but all the NHL players who want to play and have a chance to win Gold for their country. Our countries are now not allowed to ask us to play in the Olympics. Me, my teammates and all players who want to go all lose. So do all the fans of hockey with this decision that we are not allowed to be invited. NHL players in the Olympics is good for hockey and good for Olympics. It sucks that will we not be there to play!!”

There should be no question this statement was actually from Ovechkin himself. You can practically hear Ovie’s voice while reading it.

It does suck that the league’s best won’t be allowed to compete on the game’s biggest stage. With the IOC, IIHF and NHL all in agreement to prevent NHL player participation, Ovechkin and other players don’t really have a choice even if they were planning to go out and play.

Ovechkin will now shift his full attention to the Washington Capitals now that his dream is dead. That’s not to say he wasn’t already focused on winning a Stanley Cup, but he mentions that he has lots of dreams and now he’ll focus on a Cup since the Olympics won’t happen.

“There is nothing like Olympic Games. It is still my dream to win an Olympic Gold medal for my country. I hope things will change and all of us will have a chance to go again in 2022. What’s most important to remember is kids have lots of dreams. My focus as it always is this time of year is on my other dream as a kid, to try to win the Stanley Cup. I am excited training camp has started in Washington and the time for talking is done. We just have to go out and do it and I will try my hardest to help my teammates win like I do every year since I came to the NHL.”

You have to feel bad for Ovechkin and the other players who dreamed of representing their country. Some may say the players should focus on their first objective of winning the Cup, but it’s disappointing the NHL didn’t try harder or have the interest to make both the season and the Olympics work.

Realistically, the NHL will probably return to the Olympics in 2022 in Beijing when it fits their business interests a bit better. Unfortunately, a lot can change in four years. Many players who would likely be called on to compete in 2018 may not be in that same situation in 2022. That’s a shame, but it’s the reality the NHL has picked.