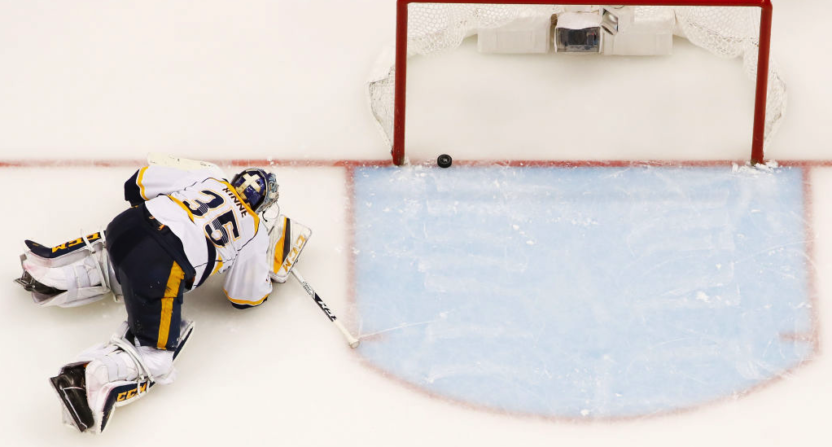 In four playoff games following a loss this postseason, Nashville’s Pekka Rinne had posted a .960 save percentage. That is, until Game 2 of the Stanley Cup Final against the Pittsburgh Penguins, in which Rinne reverted back to the form that had seen him get benched earlier this season. While Matt Murray at the other end of the ice has held the Penguins together with his spectacular saves and calm demeanor, Rinne might be the lone reason why the Predators are now facing a 2-0 series deficit.

Pittsburgh is a remarkable 6-1 this postseason when being outshot by 10+ shots, which is outright insane. Somehow, the Penguins found a way to win a wacky Game 1 while going without a shot for 37 minutes of play and only getting 12 in total, the lowest ever for a game-winning team in the Stanley Cup Final.

In Game 2, despite being physically battered and bruised, and badly outshot again, the Penguins did what has become their calling card: winning in all sorts of situations. But in both games, Pittsburgh got a helping hand from Pekka Rinne, who picked an awfully bad time to play his worst hockey of the playoffs.

His overall stats this postseason are still really good. He’s 12-6, with a 1.98 GAA and a save percentage of .929. But before the start of the Final, and putting up the worst save percentage for any goalie facing 10+ shots in any playoff game ever, it was even better at .941. He was the backbone that provided structure and support as the Predators became a juggernaut this postseason, dispatching everyone in their path.

Pekka Rinne faced 6 scoring chances in this game and let 4 in.

Teams don’t win games going 0-for-7 on the power play with one shot in those seven power plays, especially in the Stanley Cup Final. They don’t win games with 12 shots and going 37 minutes without one period. It sounds reductionist to say that without Matt Murray, the Predators would be up 2-0 in the series heading to back to Nashville, but every stat bears that out. 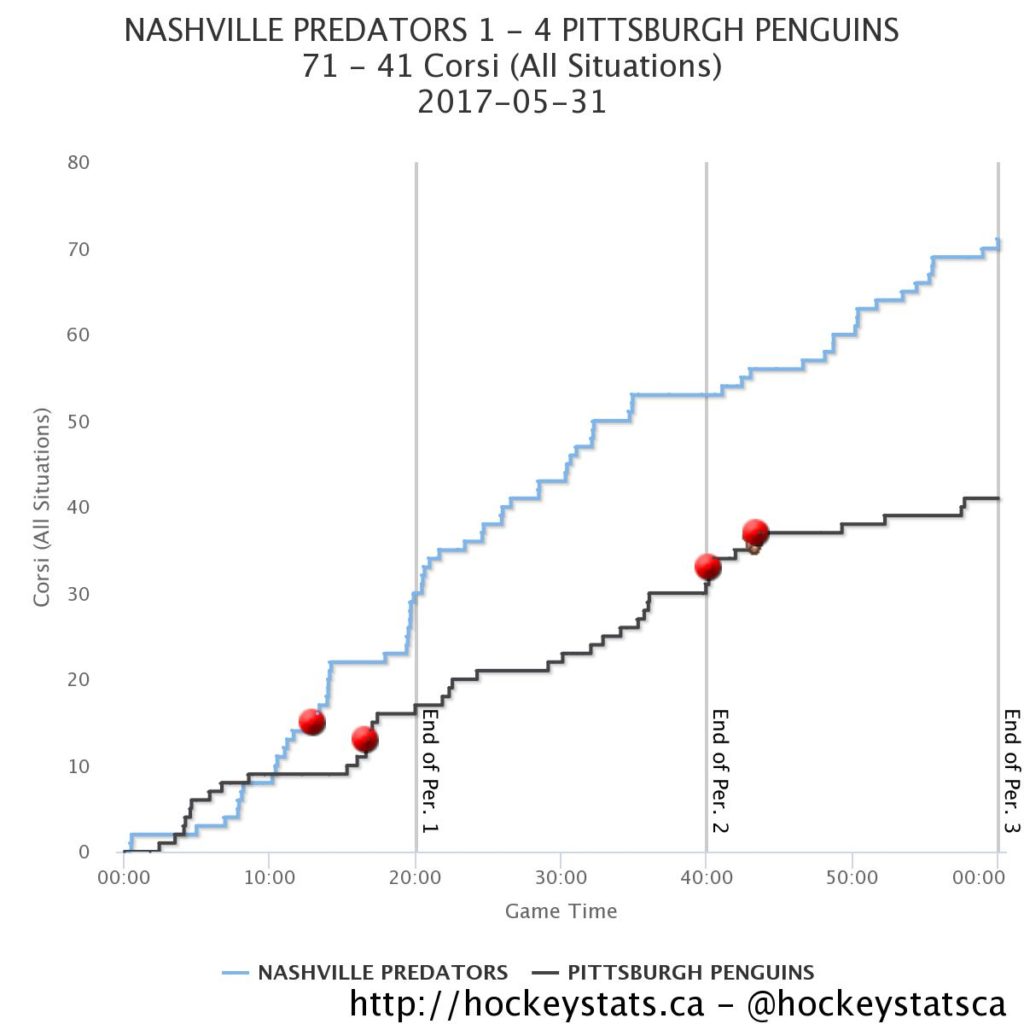 The Predators have been better in just about every measurable metric in the first two games of this series, yet because of their goaltender, they are down 2-0 and facing ominous history. This is the fourth time Nashville has gone down 2-0 in a series in the playoffs, and they lost the previous three. The Penguins have only blown two 2-0 series leads in their franchise history and none since 2000. Teams that win the first two games at home in the Final are 34-for-37 in winning the Cup.

The biggest question heading into Game 3 will be whether Pekka Rinne or Juuse Saros starts between the pipes. Peter Laviolette, was as lukewarm in his praise of his No. 1 goalie after the game:

“Pekka’s been excellent for us all year long,” Laviolette said. “There’s things that we could’ve done. All three goals in the third period were odd-man rushes.”

Rinne has faced the Penguins nine times in his career, and lost all nine of those games. He may not get an tenth crack, and the best chance for the Predators to get back into this series might well be not giving him that chance against the Penguins when the series shifts to Bridgestone Arena.

If Preds lose, Rinne will be 0-7-2 all-time vs. the Penguins with SIX 4+ goal games allowed

Peter Laviolette knows that his team has been the better team through most of the first two games of this series, yet they are down 2-0 despite all of that because of the opportunistic Penguins, Matt Murray, and Pekka Rinne’s implosion.

The best and last chance for Nashville to change the tenor of this series might be to switch goaltenders for Game 3. There might not be many cards left to play.