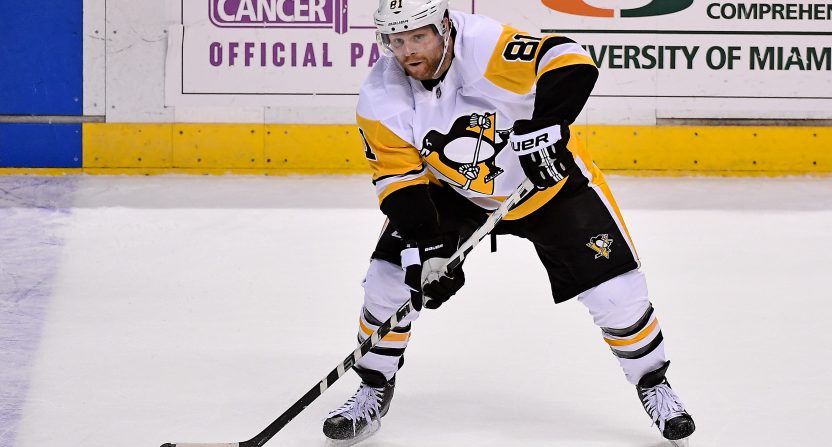 The Pittsburgh Penguins have been searching out a trade to duck out of a tricky Phil Kessel situation for most of this offseason. On Saturday, they finally found a satisfactory deal, sending Kessel to the Arizona Coyotes. For the perpetually win-now Penguins, the trade marks a turning point, as they enter the Sidney Crosby-Evgeni Malkin late career stages without a clear third star.

Kessel will head to the Coyotes along with prospect Dane Birk and a 2021 fourth round pick in exchange for center Alex Galyenchuk and prospect Pierre-Olivier Joseph. Arizona was Kessel’s No. 1 preferred destination due to his friendly relationship with Coyotes coach Rick Tocchet, a former Penguins assistant.

A Kessel trade was always going to be difficult for Pittsburgh GM Jim Rutherford. The unusual amount of control Kessel held over his future restricted the Penguins’ leverage; Kessel had to approve all potential trades, except to clubs on an eight-team list, which was reported to only include teams that are unlikely to deal for him — plus the Coyotes, per The Athletic’s Josh Yohe.

He had already vetoed a trade to Minnesota. It became public knowledge that Rutherford wanted to trade Kessel when the details of a potential Kessel-Jason Zucker swap became public, further impeding the Penguins’ ability to swing a satisfactory deal.

As time went on, and reports began to swirl that Rutherford was resigned to holding onto Kessel, it became less and less likely that the Penguins would be able to come out on the right end of any trade. The Vegas Golden Knights, theoretically a destination Kessel might approve, would probably have been able to negotiate Jonathan Marchessault out of the deal. Few players approaching Kessel’s level are on the market.

Fishing out a quality player would always be tough for Rutherford, if he could fish any players out at all. He did about as well as he could by nabbing Galyenchuk, a 25-year-old who had 41 points for the dismal Coyotes last year. Galyenchuk provides the positional flexibility that Penguins coach Mike Sullivan desires and could give Pittsburgh power play minutes.

Galyenchuk’s numbers (19g, 22a last season) show a player who can score at a reasonable rate but defend at a less-than-reasonable one. In that way, he’s a like-for-like exchange with Kessel, who is notorious for slacking on defense. But Kessel has scored at a near-point-per-game rate for years, while Galyenchuk hasn’t hit 20 goals since the 2015-16 season with Montreal. It is undoubtedly a net loss for the Penguins, and Rutherford had to know this going in. He decided to bite the bullet, hoping that the cap space the trade nets — the Penguins retain no salary — will free Pittsburgh to seek out further offensive help.

Where Galyenchuk will play in Pittsburgh’s lineup is unclear. Nick Bjugstad looked competent in the third-line center role last season after arriving from Florida, and Sullivan has Jared McCann available down the middle as well. Sullivan, who has shown a propensity for mixing and matching, will likely test multiple different scenarios. He has preferred McCann as a winger thus far, though Bjugstad was acquired with the intent of at least trying him on Crosby’s first line opposite Jake Guentzel.

Part of the bet here from Rutherford is that shipping Kessel will rejuvenate a Penguins team that fell on their collective face against a more determined New York Islanders team in the first round of the Stanley Cup Playoffs. The locker room might come together somehow, the way it did when Rutherford swapped the prickly James Neal for Patric Hornqvist four years ago.

Kessel gives off an air of apathy, despite being a supremely fit athlete and one of the league’s best scorers.

Sullivan, a hard-nosed hockey man, never seemed thrilled with Kessel’s antics. Kessel had always wanted to play alongside Malkin on the second line, so when Sullivan moved him to the third line — a frequent occurrence over Kessel’s four years in Pittsburgh — the player-coach relationship faltered. Rutherford did not appear to have had a great relationship with the former Maple Leaf, either.

The reasons for Kessel’s discontent in Pittsburgh were fully revealed in a well-reported Rob Rossi article in The Athletic. There were plenty of reasons cited for Kessel’s fractured relationship with Penguins brass, chief among them his lack of defensive attention to detail and his unwillingness to accept a spot away from Malkin’s line. In addition, Rossi reported that Kessel was a frequent casino-goer and that the Penguins were worried his habit would rub off on younger players like Guentzel.

Pittsburgh look now to a post-Phil future. They still lack meaningful cap space, though offloading Kessel’s contract helps some in that department. Making a dent in free agency will be tough with massive Jack Johnson and Erik Gudbranson contracts on the books — Rutherford will have to overcome his own damaging mistakes in order to improve this team.

Rutherford will have to scour the trade market to find Malkin a winger or two and maybe add some help for the lackluster defensive six, which remains the Penguins’ biggest problem due to Rutherford’s bizarre investment in bad players.

The outline of a Stanley Cup team remains, but star power alone doesn’t win championships. Pittsburgh will have to be creative to overcome the loss of its third star.