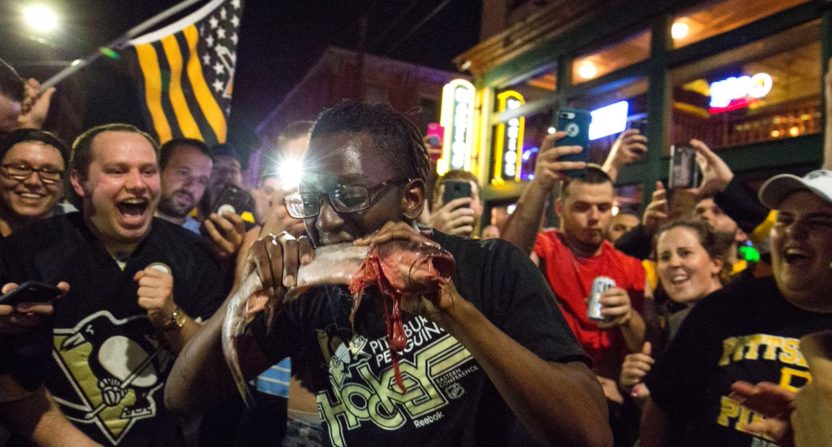 I’m still deciding if this is awesome or disgusting. After the Penguins beat the Predators on Sunday to win their second straight Stanley Cup, Pittsburgh fans at the street celebration started taking bites out of raw catfish.

Now, this wasn’t just some drunken impulse. It all started with a Predators fan chucking a catfish onto the ice during Game 1 in Pittsburgh. His peers drew inspiration from that courageous act, and fans tossed a few different things on the ice — including more catfish — during Game 3 in Nashville.

Catfish is tasty, and that’s a great trolling move by Penguins fans. Eating it raw … well, that’s quite bold.

Fans have started to eat catfish in celebration of the @penguins winning their second straight #StanleyCup @PittsburghPG @PGVisuals #Pens pic.twitter.com/HerR2d65DA

We go live to Pittsburgh where they're eating catfish

This guy took a bite out of a raw catfish after @penguins beat @PredsNHL to win Stanley Cup. Photo by @RussBurgh. pic.twitter.com/Fg5QiTD0YA

I heard it's because of the cup #Pittsburgh #Penguins #StanleyCup #Catfish #Yinzer #SouthSide pic.twitter.com/4UyX4BOyHg

annnnd there it is. pic.twitter.com/ZvliAQZ2NK

Sorry, Nashville fans. I hope food poisoning for your opposing fans is enough of a consolation.