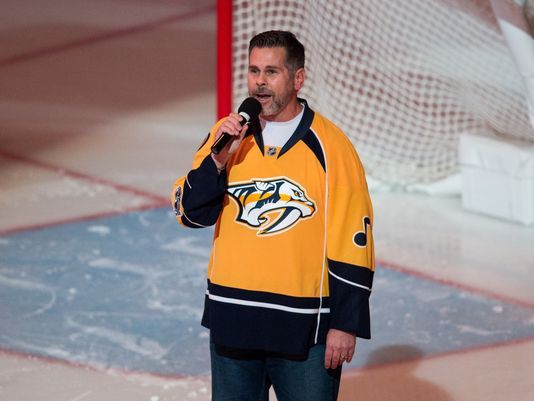 The deeper a team goes into a postseason run, the more high profile the anthem singer that team tends to get. In Nashville, the man who regularly performs the national anthem before the puck drops is a bit upset with the team. With the Predators set to host Game 3 of the Western Conference Finals, the team will continue to bring in big-name artists to sing The Star-Spangled Banner, leaving him off the ice entirely.

Dennis Morgan has been a regular performing the anthem for the team for the past 17 years, but he now takes a back seat to singers like Carrie Underwood and Lady Antebellum with the Predators working their way to the Stanley Cup Final. Now, Morgan and the Predators are in a bit of a war of words, via public statements on the issue.

“I’m not going to hide my disappointment and I told the Predators that I have been asked the same question over and over and it’s just really getting old,” Morgan said, according to The Tennessean. “Everywhere I go — obviously at my day job (as a healthcare IT recruiting manager) and at (Bridgestone) arena as well as everywhere else I go to church, grocery stores, on the street, in meetings and in restaurants — people want to know how I feel.”

Morgan claimed he didn’t want to make a big deal about it until after the Predators’ postseason run, which he hopes ends with a Stanley Cup parade through the city. But because of the constant questions he has faced, he felt the need to address the elephant in the room. In light of this anthem controversy that has nothing to do with anyone taking a knee, the Predators defended their anthem decisions by claiming they have always had the wiggle room to allow for other artists and performers to perform the anthem.

“We have always valued Dennis K. Morgan’s performance of the national anthem at Predators’ home games. Our arrangement with him has always allowed for nationally and internationally renowned musical artists to perform when available to further enhance our game experience while paying respect to our country through their respective awe-inspiring renditions of the national anthem. The reaction from our fans in Bridgestone Arena as well as from around the country to seeing and hearing world class performers such as Carrie Underwood, Luke Bryan, Vince Gill and his daughters, Little Big Town and Lady Antebellum during the 2017 Stanley Cup Playoffs has been overwhelmingly positive, bringing national and international exposure to our community while continuing to set our game experience and atmosphere apart from others in professional sports.”

So how did this all get started? It got started in the first round of the playoffs as Nashville was battling the Chicago Blackhawks. Before Game 3 of the series, Morgan was approached by the team about Mike Fisher’s wife asking to perform the anthem before the game. What was supposed to be a one-game arrangement, the Predators have continued to bring in guest anthem singers and promoting them as A-listers, a description that tugs at the heart strings of Morgan’s emotions.

Morgan is now wondering if there is any future for him to sing the anthem at Predators games anymore. Of course there is, so we don’t have to be overly dramatic about it. But here’s hoping the Predators do Morgan right. If fortunate enough to play in a Stanley Cup Final game, having a key ingredient to the pregame festivities on hand to perform the anthem would be a nice touch for the home crowd.