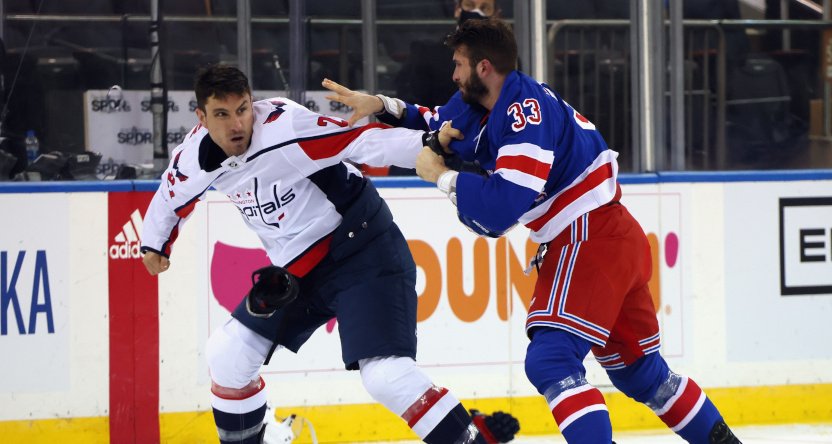 This week has seen the Washington Capitals play the New York Rangers twice, and those games have led to NHL-wide reverberations. On Monday, the Capitals’ 6-3 win drew a lot of attention for the controversial actions of Washington forward Tom Wilson, who punched the Rangers’ Pavel Buchnevich while he was on the ice and flung Artemi Panarin down by his hair. That saw the Capitals even delete a tweet they posted in support of Wilson.

But Tuesday saw the NHL Department of Player Safety levy only a fine against Wilson rather than a suspension. And that led to a remarkable statement from the Rangers calling for the job of NHL senior vice president of player safety George Parros. And Wednesday saw the Rangers fire president John Davidson and GM Jeff Gorton after reports of them trying to distance themselves from that team statement (different sources have different comments on if those firings are linked to the statement or not), and then Wednesday night’s rematch between the teams started with three simultaneous fights, including the above-pictured one between the Rangers’ Phillip Di Giuseppe (at right) and the Capitals’ Garnet Hathaway:

Oh, and after this, there were three more first-period fights, one involving Wilson (who later left the game with a listed upper-body injury). So that’s remarkable. And regardless of anyone’s feelings on if Wilson should or should not have been suspended for his actions Monday, it’s quite amazing that this has led to days of league-wide drama.

And it’s particularly interesting to see this happen around the firings of the Rangers’ GM and team president (who made it clear they didn’t endorse the team’s “statement”), and to see that then lead to a seemingly pre-planned line brawl right at the start of Wednesday night’s game and then three further fights. And it’s interesting that this happened on a nationally-televised NBCSN game, too; for a league that seems to be trying to deemphasize fighting a lot of the time these days, this probably wasn’t the ideal way for their Wednesday night national showcase to start.